Eight core industries' output falls at fastest pace in 6-months, down 4.6% in February

After posting contraction in 8 of the first 11-months of the year, the cumulative core sector output in the April-February period of FY21 fell to -8.3 percent.

The combined output of the eight core sector industries fell at the fastest pace in 6-months, contracting 4.6 percent in February, from a year ago, confirming fears that a recovery in industrial growth would be slower than expected.

Core sector output had seen a slow but steady rise over the previous two months, rising by 0.9 percent in January. But after posting contraction in 8 of the first 11-months of the year, the cumulative core sector output in the April-February period of FY21 fell to -8.3 percent. As  compared to this, it had witnessed a 1.3 percent rise in the corresponding period of the previous year.

The data released by the commerce and industry ministry on 31 March showed production declined in all eight core industries. The steep fall in factory output prompted experts to predict that the industrial recovery will occur slowly. "Notwithstanding an unfavourable base effect, each of the eight constituents recorded an unnerving YoY de-growth in February 2021, another reminder that the phase of rapid recovery seen until December 2020, is clearly behind us," Aditi Nayar, Principal Economist at ICRA, said. 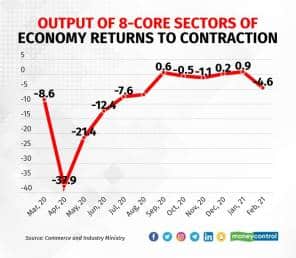 The latest infrastructure numbers released by the government seem to validate their thinking because the eight core industrial of coal, crude oil, natural gas, refinery products, steel, cement, fertilizer and electricity have a combined weight of over 40 percent in the Index of Industrial production, or IIP.

Within the core sector, cement and steel are considered better indicators of industrial activity as they are vital to a number of industries. Their production moves in line with the demand from industries dependent on them. In the latest month, cement production contracted 5.5 percent in February from a year ago, after a 5.8 percent fall in January. Meanwhile, production of finished steel contracted 1.8 percent in February, after rising for the previous 6-months. The data point to a drop in construction activity.

In the energy space, both crude oil production and petroleum refining continued to experience an entrenched slowdown which has now continued for more than 12-months. India's oil demand had fallen in the initial days of the pandemic due to the nationwide lockdown closing down factories. But the continued contraction has led to experts suggesting the deep lack of demand is symptomatic of sustained slowdown in overall industrial activity.

They argue that along with coal and electricity, the latest fall in these four categories, also points to supply-side issues. There is a shortage of all these products and a sustained fall in output indicates a greater reliance on imports or a drag on production, experts say.

The fertilizer sector, which had beaten the contraction pangs even in the peak of lockdown, also contracted in February. After rising by 2.7 percent in January, output fell by 3.7 percent in the latest month. Given the sharp base effect, ICRA expects the core sector output to expand by 9-11 percent going forward in March, which should result in a modest growth of around 2 percent in the fourth quarter of FY2021.

The core sector data is released about two weeks before the IIP figures, pertaining to overall industrial output are put out. The figures for February will be announced on 12th April.

"The lead indicators such as the core sector, auto output and non oil exports have revealed a decidedly mixed trend for February 2021. Based on the available data, we expect the contraction in the IIP to deepen to 2-3 percent in February 2021 from 1.6 percent in January 2021," Nayar said.