The growth is expected to be broad based across verticals driven by strong momentum in digital transformation programs. However, the cross currency headwinds may drag the growth momentum to some extent.

India’s second largest IT services firm Infosys is expected to report a 5.5 – 9.5 percent year-on-year (YoY) growth in its consolidated profit after tax (PAT) for the first quarter of FY23. Experts expect the company to register a PAT of Rs 5,500 – 5,700 crore for Q1FY23. The company will report its earnings for the April-June quarter on July 24.

The brokerages expect the growth to be broad based across verticals driven by strong momentum in digital transformation programs. However, the cross currency headwinds may drag the growth momentum to some extent.

The company had recorded a consolidated PAT of Rs 5,195 crore during Q1FY22 on consolidated revenue of Rs 27,896 crore.

The PAT for the company during the previous quarter stood at Rs 5,686 crore on a consolidated revenue of Rs 32,276 crore. 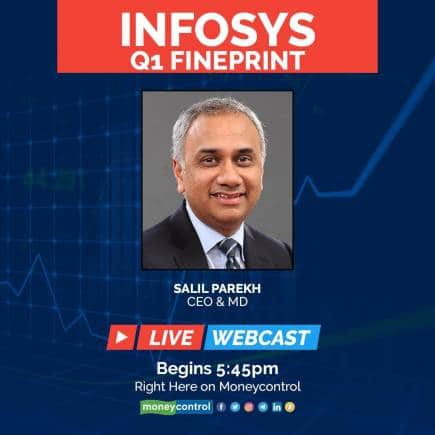 The supply side pressures continue to plague the Indian IT sector and Infosys is no exception. The impact of wage hikes, increased travel expenses and drop in utilisation due to aggressive fresher hiring in last two quarters. are likely to pull the margins further down during the quarter.

“Margins are expected to decline by 150 bps QoQ due to salary hikes, supply side pressures, travel costs partly offset by the depreciation in the Indian Rupee”, a report from the brokerage firm Phillip Capital said.

Kotak Institutional Equities on the other hand, “forecast 80 bps sequential and 290 bps YoY decline in EBIT margin, largely due to wage revisions and increase in travel costs, offset by increase in margins of manufacturing vertical and modest Rupee depreciation of 1.4 percent (net of cross-currency headwinds)”.

According to a report from Kotak Institutional Equities, large deal execution has been under the scanner noting sharp margin deterioration. “Margins in the manufacturing vertical has declined by over 1,675 bps YoY and accounted for 170 bps of the 290 bps YoY decline in EBIT margin”. It expects margins in the manufacturing vertical to increase in the June 2022 quarter.

The brokerages expect Infosys to retain a guidance of 13-15 percent revenue growth in CC (constant currency) terms and EBIT margins of 21-23 percent.

High attrition is a worrying sign for Infosys and the concern has now shifted to onsite, where attrition among local headcount is higher than offshore attrition. Quantum of wage increase onsite will be an area of focus.

The impact of supply-side pressures on margins and the levers to defend margins in light of creep up in travel expenses and supply-side pressures will be monitored closely. Investors will also be looking at the mega deal activity, deal pipeline and scope of price increases to offset margin pressure.

Disclaimer: The views and investment tips of investment experts on Moneycontrol.com are their own and not those of the website or its management. Moneycontrol.com advises users to check with certified experts before taking any investment decisions.
Gaurav Sharma
Tags: #Infosys #Infosys earnings #Infosys Limited #Infosys Q1 #Result Poll
first published: Jul 23, 2022 03:03 pm