Brokerages expect a decline in domestic sales due to a high base of last year but a healthy YoY growth in the US, Europe and South Africa

Cipla Limited is expected to report a 10 percent year-on-year decline in consolidated profit after tax (PAT) on July 29 when it will declare its results for the quarter ended June 2022. Its consolidated revenues are likely to remain flat.

On a sequential basis, the consolidated profit is seen 79 percent higher on the back of a 5 percent growth in consolidated revenues.

One of the largest drug-makers in the country, Cipla is expected to report a consolidated PAT of Rs 647 crore on consolidated revenues of Rs 5,539 crore for the quarter, according to an average of estimates of five brokerages polled by Moneycontrol. 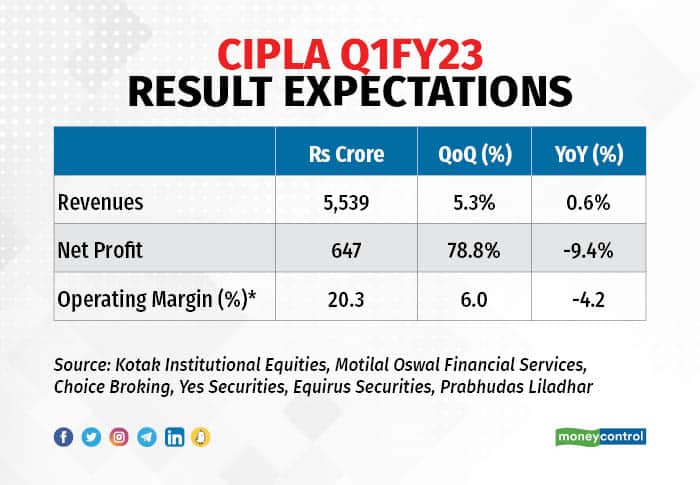 The company recorded a consolidated PAT of Rs 715 crore in the year-ago period on consolidated revenue of Rs 5,504 crore. During the quarter, the company had an exception expense of Rs 57.5 crore, adjusting for which the PAT would have been Rs 419.6 crore.

During the January–March period, the company registered a PAT of Rs 362 crore on revenue of Rs 5,260 crore. There was an exceptional expense item for Rs 124.6 crore, adjusting for which the profit in the previous quarter would have been Rs 839 crore.

The brokerages expect a decline in domestic sales on a high base of last year due to higher COVID-related revenue, while the sales in the US, Europe and South Africa and are expected to report a healthy YoY growth.

“We expect Cipla to report a 5 percent YoY decline in domestic sales in Q1FY23 on account of a high Covid-led base. Excluding Covid, we expect domestic sales to grow by 9 percent on year," Kotak Institutional Equities analysts said in a report.

The brokerage expects US sales at $156 million, up 11 percent on year albeit down 2 percent sequentially even as Lanreotide (launched in March 2022) continues to scale up.

Brokerage firm Motilal Oswal Financial Services expect the US sales to grow 21 percent on year to $170 million, driven by new launches and market share gains in gAlbuterol/g-Lanreotide. It expects domestic formulation sales to decline 15 percent YoY on a high base.

South Africa and Europe are seen registering a healthy YoY growth of 8 and 9 percent, respectively.

The margins, however, are likely to witness a contraction due to the increase in raw material costs and also price erosion in generics business in the US.

“We expect Cipla's gross margin to erode by 180 bps YoY to 60.6 percent owing to raw material inflation and US price erosion," the Kotak report said. “Overall, after building in higher R&D (research & development) (5.8 percent of sales) and SG&A spends, we expect 328 bps YoY fall in EBITDA margin to 21.2 percent."

The key things to watch for would be are update anti-rabies vaccine tenders for Low and Middle Income countries (LMIC) along with the update on gAbraxane and other niche molecules expected in FY24.

Update on inhaler portfolio for regulated market, competition landscape in Proventil market after Sandoz got approval and commentary on gSomatuline launch and outlook would be the other things to watch out for.