Upcoming Webinar:Join our experts for discussion on ‘Re-inventing Finance: with Process, People & Technology’.
you are here: HomeNewsBusinessCompanies

Highest claims settlement record: Is your insurer on this list?

Public sector and private sector general insurers are in neck-to-neck competition as far as settling of claims is concerned, shows data from the Claims Handbook released by the Insurance Brokers Association of India (IBAI).

Among the public sector general insurers, despite the number of claims filed being more than 2.5 million in FY19, the claims settlement ratio was above 84 percent for all the state-owned general insurers. 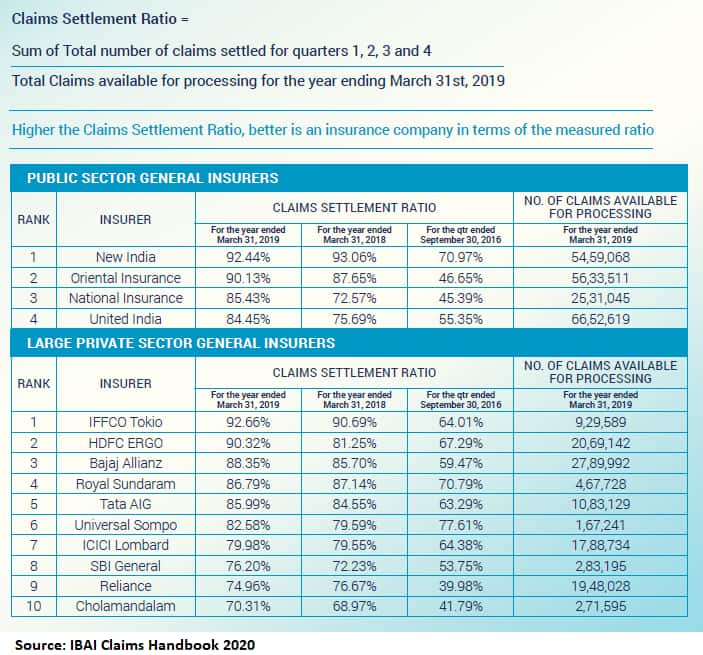 When it comes to health insurance, Religare Health had a claims settlement ratio of 92.58 percent for FY19. The health insurer handled 7,00,596 claims in the financial year and settled almost 93 percent of them.

For the industry as a whole, the claims settlement ratio stood at 85.18 percent for the year ended March 31, 2019. This rose from 80.77 percent in the year-ago period.

Among the public sector players, only New India Assurance had claims settlement efficiency ratio above 80 percent in FY19.

Here, HDFC ERGO General Insurance topped the list with claims settlement efficiency ratio with 89.07 percent  for FY19. This improved from 77.55 percent in FY18. For the general insurance industry as a whole, this ratio stood at 74.16 percent for FY19.