As semiconductor crisis gets sorted, carmakers shift to top gears

This was particularly true for OEMs or original equipment manufacturers with a line-up of SUVs in their arsenal, given the steady popularity of the segment

June was an eventful time for the auto industry, marked by record rollouts in the sport utility vehicle or SUV space. This coincided with the global semiconductor supply shortage moderating, which resulted in vehicle production returning to near-normal levels. This in turn pushed up car sales, given that the chip shortage had led to long waiting times for would-be buyers. This was particularly true for OEMs or original equipment manufacturers with a line-up of SUVs in their arsenal, given the steady popularity of the segment.

MSIL, while sharing the numbers, maintained that the shortage of electronic components had a “minor impact” on the production of vehicles, mainly in domestic models. The company took all possible measures to minimize the impact, it said.

Hyundai Motor India, which had lost the number two status in sales to Tata Motors a month back, regained its position with domestic sales of 49,001 units (up 21 percent) and exports of 13,350 units, yielding a total sales figure of 62,351 units for the month.

Meanwhile, Tata Motors continued to see growth in sales, recording an all-time high monthly passenger vehicles sales of 45,197 units last month, growing by a huge 87 percent from a year earlier. Sales in the first quarter of FY23, at 130,125 units, was also the highest ever, surging 102 percent over the same quarter last year. Despite that, however, the Indian automaker could not maintain the second spot in the domestic car industry. 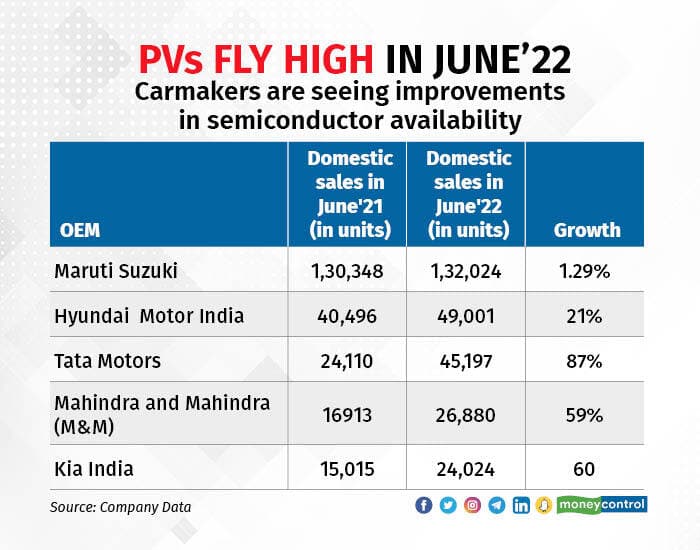 Mahindra & Mahindra (M&M) said its total auto sales for June 2022 stood at 54,096 vehicles. In the utility vehicles (UV) segment, M&M sold 26,620 vehicles in the month, 60 percent above year-earlier monthly sales. The passenger vehicles segment (which includes UVs, cars and vans) saw sales of 26,880 units in June 2022. Exports for the month stood at 2,777 vehicles.

Veejay Nakra, president, automotive division, M&M, said, “Q1FY23 is our second consecutive highest SUV sales quarter due to continuing robust demand for all our brands including XUV700, Thar, Bolero and XUV300. We sold 26,620 SUVs in June and overall, 54,096 vehicles, registering a growth of 64 percent.”

Kia India too, which managed to sell 24,024 cars in June 2022, registered its highest-ever monthly sales. The South Korean carmaker achieved a year-on-year growth of 60 percent as it sold 15,015 units in the same period last year.

Hardeep Singh Brar, vice-president and head of sales and marketing, Kia India, said, “Despite the global supply chain constraints, we are still managing to achieve milestones in record time."