The airline plans to fly from John F. Kennedy International Airport over the Atlantic Ocean, the U.K., southern Europe and central Asia, according to a memo to Cathay flight staff seen by Bloomberg News.

An Airbus SE A350 aircraft operated by Cathay Pacific Airways Ltd. prepares to land at Hong Kong International Airport in Hong Kong, China, on Saturday, August 12, 2017. With the company expected to announce another loss this week, Cathay needs to shift strategy from being the region's top airline for premium fliers and make a bigger effort to woo some of the millions of mainland leisure travelers who have enriched its state-owned rivals in China, analysts say. Photographer: Vivek Prakash/Bloomberg

Cathay Pacific Airways Ltd. plans to reroute its New York-Hong Kong service to avoid Russian airspace, in what would be the world’s longest commercial passenger flight by distance. It will take about 17 hours.

The airline plans to fly from John F. Kennedy International Airport over the Atlantic Ocean, the U.K., southern Europe and central Asia, according to a memo to Cathay flight staff seen by Bloomberg News. The distance of 16,618 kilometers (10,326 miles) would surpass Singapore Airlines Ltd.’s New York service, which takes about 17-and-a-half hours to cover 15,349 kilometers, FlightRadar24 data show. 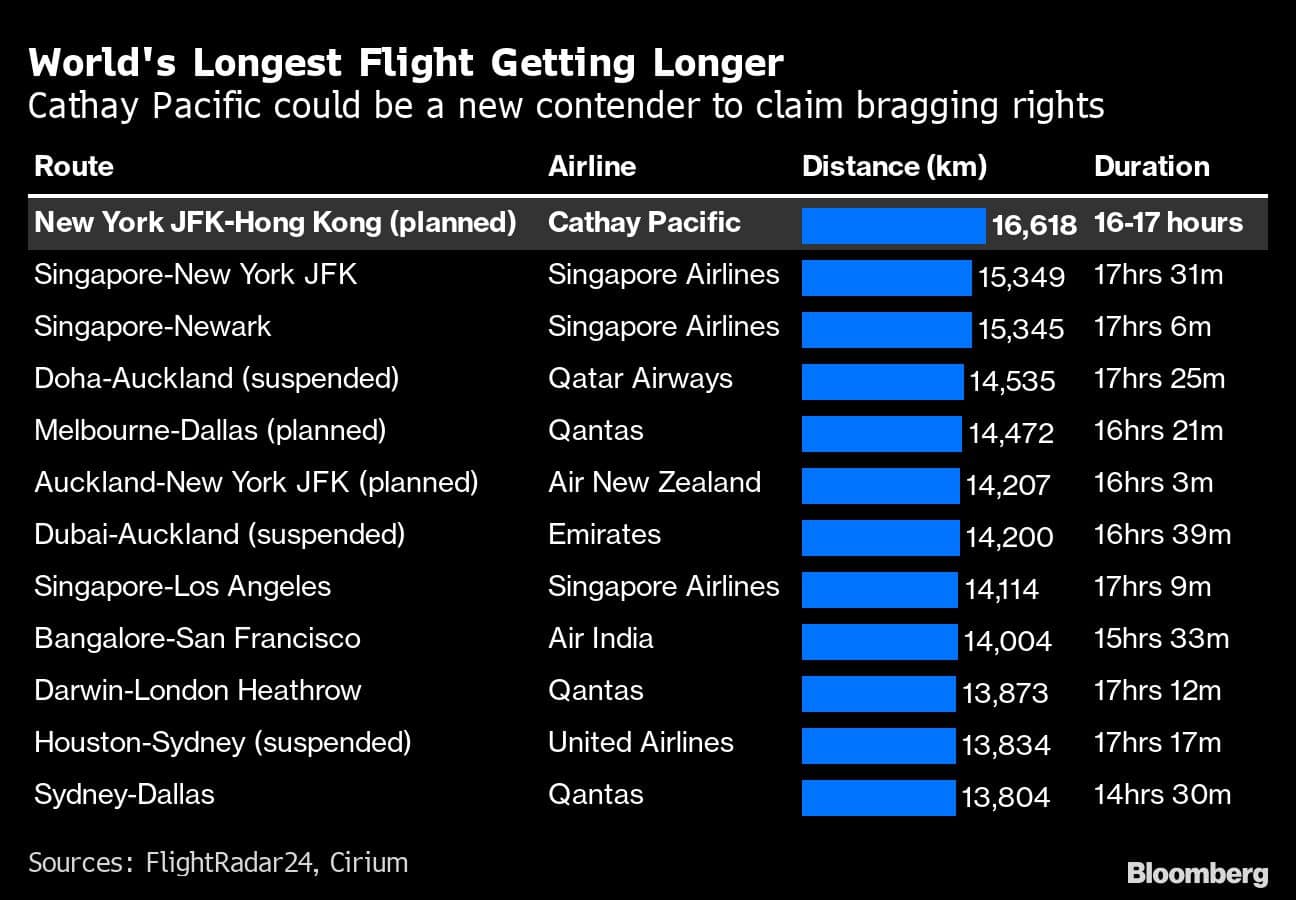 A spokeswoman for Cathay said Airbus SE’s A350-1000 is capable of operating the route, which would typically fly over the Arctic and through Russian airspace. Many Asian airlines are avoiding Russia due to the conflict in Ukraine.

“We are always running contingency routings for potential events or scenarios,” the spokeswoman said. “The Transatlantic option relies on the facilitation of strong seasonal tailwinds at this time of the year in order for the flight time to be between 16 and 17 hours, thereby making it more favorable than the Transpacific route.”

The airline said it is monitoring tailwinds every day, and that their benefits are diminishing. Jet streams tend to be stronger in the winter months.

Cathay is seeking overflight permits to operate the service, which it said was normal for a new route. Before the pandemic, which has severely reduced its schedule, the carrier operated up to three round-trips between Hong Kong and JFK daily. Cathay’s most recent New York-Hong Kong flight stopped in Los Angeles before continuing over the Pacific and into the Asian financial hub without entering Russian airspace. The new, extended route would remove the need for a stopover, making it more cost-effective and competitive.

Several airlines have plotted routes to avoid Russia, mostly between Asia and Europe. Japan Airlines Co Ltd rerouted its service from Tokyo’s Haneda airport to London’s Heathrow via Alaska and Canada rather than flying over Siberia. That added four-and-a-half hours to the 11-hour 55-minute journey.

Such flight changes are likely to only be temporary given the costs carriers face from high oil prices, as well as uncertainty over the accessibility of Russian airspace.

Qantas Airways Ltd.’s 20-hour trips connecting Sydney with London and New York using an ultra-long range Airbus widebody jet are still being planned after the pandemic delayed their launch. The airline did a test of the so-called Project Sunrise service in 2019, flying New York to Sydney with 40 passengers.

Air New Zealand Ltd. last week unveiled a new ultra-long service from Auckland to New York JFK, while Qantas announced a Melbourne-Dallas route on Monday, both of which are due to start later this year. Qatar Airways QCSC and Emirates Airline flights to Auckland were among the world’s longest until they were suspended due to Covid-19.