The drama stood out in a country best known for romantic musicals, which was the point. The New York Times named Sacred Games one of the best foreign-made shows of the last decade, and Netflix described it at the time as its most-watched locally produced show in the country.

Two-and-a-half years after it launched in India, Netflix Inc. had its first big hit. Based on a sprawling novel by Indian-American author Vikram Chandra, 2018’s Sacred Games was a Hindi-language TV show exploring Mumbai’s criminal underworld and one police officer’s efforts to save the city. The drama stood out in a country best known for romantic musicals, which was the point. The New York Times named Sacred Games one of the best foreign-made shows of the last decade, and Netflix described it at the time as its most-watched locally produced show in the country.

The success seemed to indicate that the company’s plan for India was coming together. Netflix’s formula for international expansion, which has worked everywhere from Canada to Japan, starts by targeting wealthy, young consumers in large cities who’ll pay to watch Stranger Things or Narcos. Then, to reach progressively larger audiences, the company hires a local team to commission projects from the country’s biggest producers, offering them creative freedom they wouldn’t get elsewhere. 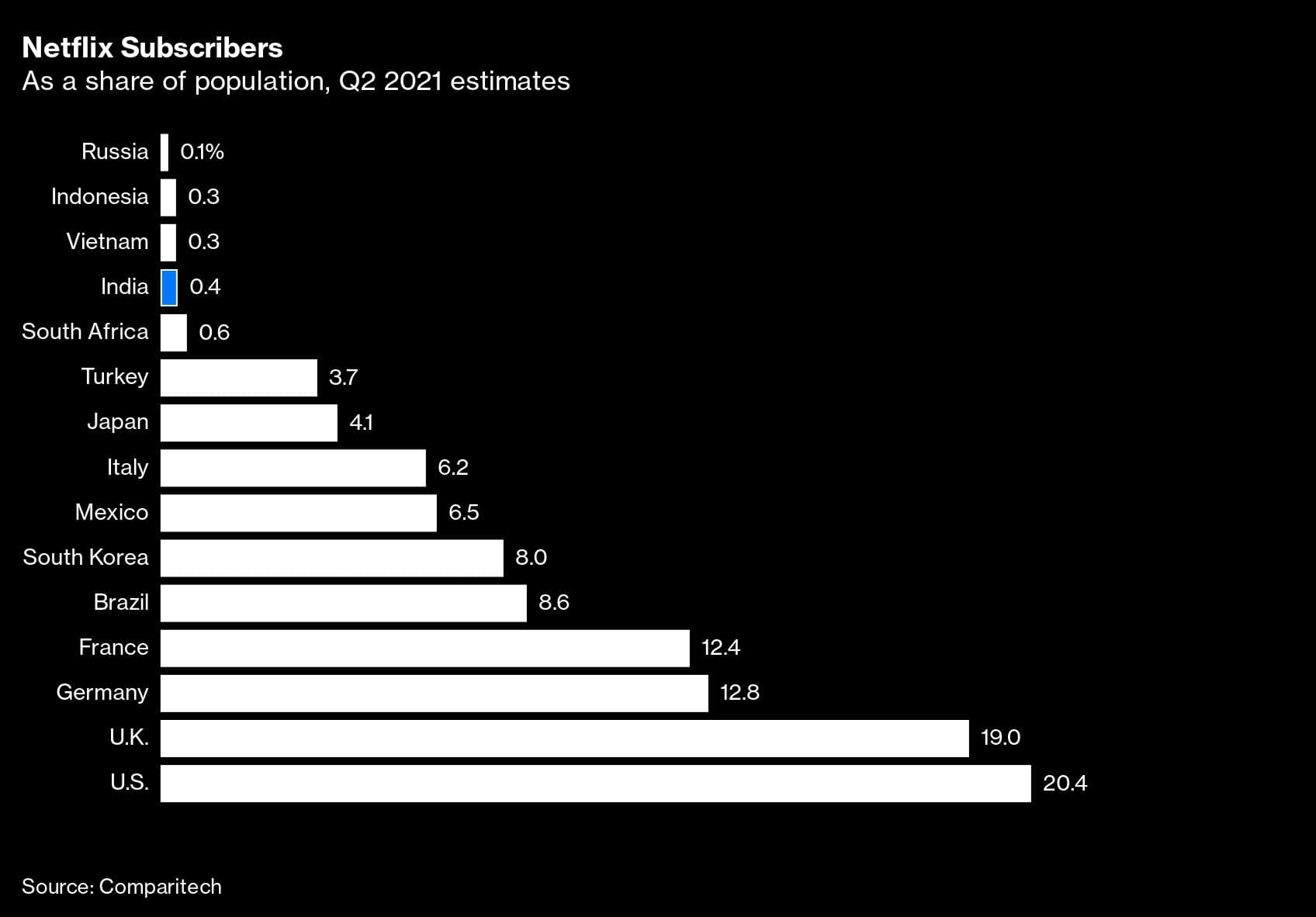 Certain things about India were working in Netflix’s favor. The country has a robust local film industry, a growing middle class, and rapidly expanding access to the internet. Several months before Sacred Games was released, Chief Executive Officer Reed Hastings told a group of Indian business leaders that Netflix would sign up 100 million customers in the country.

Almost four years later, it has only 5.5 million subscribers in India, according to research firm Media Partners Asia. Netflix describes the second season of Sacred Games as a success, but hasn’t announced a third season. Many of its other shows have been canceled after just one season. In a call with investors in January, Hastings expressed frustration with the lack of progress in India, alarming employees who aren’t used to their boss being so forthcoming about Netflix’s failings.

The stakes are higher than ever. Slowing subscriber growth has investors worried, and the company’s share price has fallen almost 40% so far this year, wiping out more than $100 billion in value. To keep growing, Netflix will have to find customers in Asia, the Middle East, and Africa. There’s no bigger prize than India, the second-most populous country in the world. The only nation with more people, China, has blocked every major streaming service.

Netflix’s problems started when executives began debating how much to charge when launching in the country in January 2016. At the time, the typical Netflix rates globally were $8 to $10 a month, aimed at young consumers who might be looking for a cheaper and more convenient alternative to pay TV. In India, pay TV costs far less than it does in most of the world, typically $2 to $3 a month. But Netflix decided it would prefer at first to have fewer, more lucrative subscribers, so it charged 499 rupees a month, which was about $7.50 at the time.

The company later reconsidered, deciding it could reach the subscriber numbers it hoped for only by dropping the price. Executives conceived a plan that would allow customers to watch its entire library for less than half its standard fee, but only on mobile devices. In December, Netflix cut its price even more dramatically, bringing it more in line with the competition.

Lower prices have brought in more customers, but holding on to them has been a challenge. Netflix’s mobile-only subscribers have been much more likely to cancel after only a few months than those who were paying for the initial, pricier plans. India also has laws that require many customers to approve the payment every month, increasing the number of people who don’t renew. “India has been a real exercise in iteratively learning how to do payments well,” says Chief Operating Officer Greg Peters.

Programming for India’s diversity—the country is home to dozens of different ethnic groups who speak more than 20 languages—is also hard. Netflix has signed deals with some of the country’s biggest production companies, including Red Chilies Entertainment and Dharma Productions. But, according to Couto, most people still sign up for its international programming. “The customers in India don’t turn on Netflix to watch Indian content,” he says. Netflix executives say its struggles are partially a result of working with Indian producers more used to making movies than high-end episodic TV. It has made several hit movies, though its head of original movies left the company last year.

Local producers, meanwhile, blame Netflix for hiring executives without strong ties to the country’s filmmaking community, then being unclear about what it wants and insisting on micromanaging projects, according to conversations with people familiar with Netflix’s Indian operations. “Netflix isn’t some U.S. company people want to hate,” says one producer, who asked not to be named for fear of alienating a potential business partner. “People at Netflix in India severed the relationships.”

These problems were most apparent with the ill-fated TV show Baahubali: Before the Beginning, a prequel to one of the most successful film franchises in Indian history. Netflix spent more than $10 million developing and producing the first season, making it an expensive project by local standards. But the executives who commissioned it have since left the company, and when Netflix hired Monika Shergill to oversee Indian content in 2019, she didn’t like what she saw. As production dragged on, the lead actor quit the show, and Netflix brought in a different creative team to come up with a new vision. Despite reports that the show has been canceled, Netflix says it’s still working on the project.

There’s still time to recover. It took years for Netflix to find a footing in important markets such as Brazil and Japan. And while the Disney+ Hotstar service has 45 million subscribers and Amazon’s Prime Video has about 15 million, Netflix argues the comparisons aren’t straightforward. Hotstar broadcasts cricket, the country’s most popular sport. Both services are also cheaper, with Amazon’s coming bundled with its home delivery service, Prime, and Hotstar customers paying just $1 a month. The average Netflix customer pays more than $4, according to Media Partners Asia.

There are also signs of change. A surge of customers joined after Netflix cut costs in December, and Couto forecasts that the company will end 2022 with almost 8 million subscribers. After striking out on many series, it’s also had some successes, including most recently The Fame Game, a show starring Indian actress Madhuri Dixit. “India has a rich, rich history of storytelling with amazing actors and writers,” says Bela Bajaria, Netflix’s global head of TV. “We are making significant investments in local, authentic stories in India.”

Covid was a time for streaming services to gain new footholds, because people were seeking entertainment they could enjoy without leaving the house. But it also held back Netflix in India by delaying productions when it was hungry for new, locally relevant content that would attract viewers. With restrictions being eased, that’s changing. The shows Netflix had planned to make in 2021 are now set to be made in 2022. Every production is a chance to find the next hit.