The EIU Democracy Index provides a snapshot of the state of world democracy for 165 independent states and two territories.

The Economist Intelligence Unit’s Democracy Index 2019 has marked the worst average scores since the index’s first edition in 2006.

India, dropped ten places in the Democracy Index’s global ranking, to 51, with an overall score of 6.90.

The Democracy Index is based on five categories: electoral process and pluralism; civil liberties; the functioning of government; political participation; and political culture; based on which each country was classified as full democracy, flawed democracy, hybrid regime and authoritarian regime. 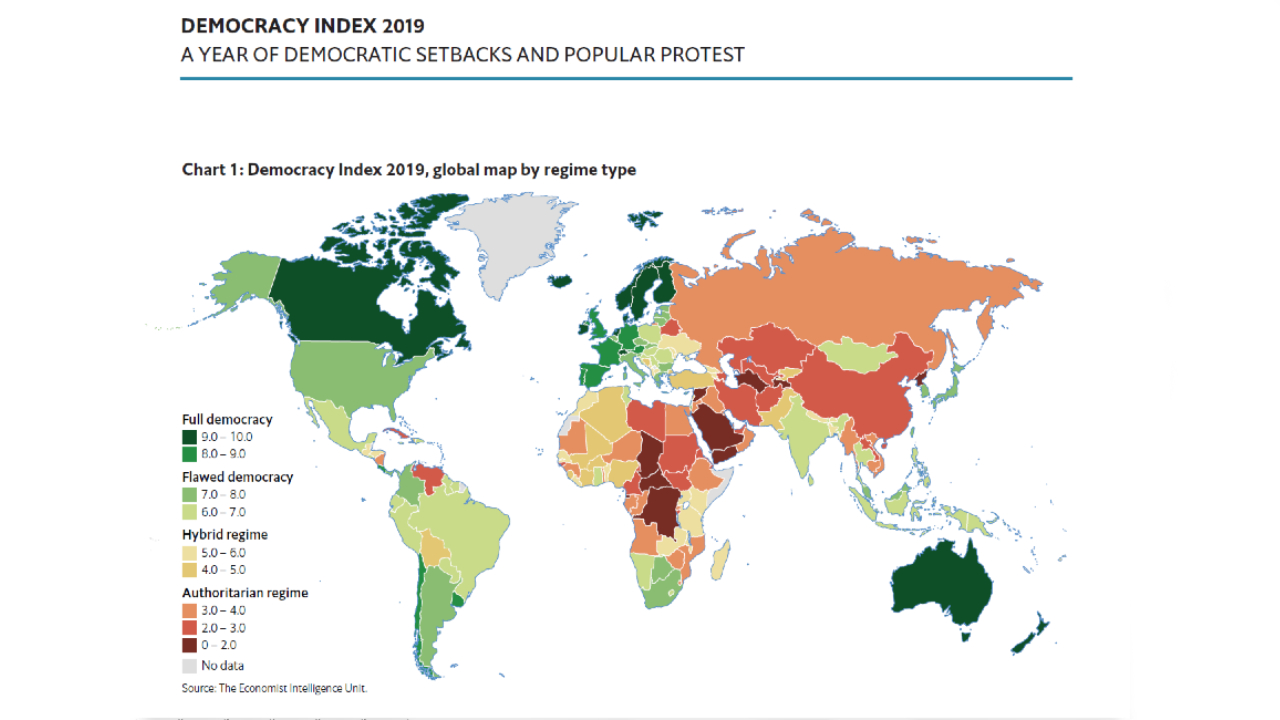 The decline in the average global score in 2019 was driven by a sharp regression in Latin America and Sub-Saharan Africa, a lesser one in the Middle East and North Africa (MENA) region, and by stagnation in the remaining four regions covered by the Democracy Index.

The largest democracy in the world, India, dropped ten places in the Democracy Index’s global ranking to 51, with an overall score of 6.90. The country scored 8.67 on electoral process and pluralism, 6.79 in terms of the functioning of the government, 6.67 in terms of political participation, 5.63 for political culture and 6.76 for civil liberties.

India’s overall score fell from 7.23 in 2018 to 6.90 in 2019. The primary cause of democratic regression was an erosion of civil liberties in the country. This is the lowest score the country has ever recorded since 2006 – the beginning of the index.

The sheer number of protests spanning different time zones has caught the attention of commentators everywhere. In fact, protests have been building a head of steam for several years. The backdrop to the recent wave of protest is in part economic (austerity, cost-of-living increases, unemployment, income inequality).

In Latin America, mass protests erupted in 2019 in numerous countries, including Bolivia, Chile, Colombia, Ecuador, Haiti and Venezuela. The drivers of these protests varied from clashes over electoral fraud to demonstrations against corruption and austerity measures.

Hong Kong was the epicentre of protest in Asia. What began as a protest against proposed amendments to Hong Kong’s extradition law soon morphed into a campaign for more democracy.

Despite disenchantment with democracy, and probably because of the degree of disaffection that now prevails, populations are turning out to vote and to protest. This heightened level of popular engagement prevented the Democracy Index from sliding even further than it did in 2019.


Exclusive offer: Use code "BUDGET2020" and get Moneycontrol Pro's Subscription for as little as Rs 333/- for the first year.