Video streaming services went beyond India's big cities in 2021. What to expect in 2022?

India's top video streaming platforms expanded beyond the big cities in 2021 as the COVID-19 pandemic triggered a surge in viewership and watch-time.

"2021 was a crucial year for regional markets – the video streaming industry's realization of the untapped potential of the space and how underserved the audiences were,” said Manish Kalra, Chief Business Officer, ZEE5 India. “Streaming platforms realized the scarcity and the immense demand of original, quality content in the audiences' local languages which led to the players majorly upping the ante on original programming."

MX Media owns and operates video streaming service MX Player along with short video app MX Takatak. On October 12, MX Player announced that it crossed 1 billion downloads on Google Play Store, joining an elite club of apps that has achieved this milestone across the world.

Viewers have also become more open to sampling content from different languages with subtitles and dubbing breaking the language barrier for consumers.

Amazon Prime Video said 50% of viewers for local language films in India came from outside the home state; MX Player is witnessing growing affinity for international content across Turkish, Korean, Ukrainian, Spanish and American shows that are dubbed in Indian languages.

The focus on local original programming will be key as streaming platforms aim to make deeper inroads into smaller cities and towns to sustain the growth trajectory, with metros slowly getting saturated, industry experts say.

"We foresee the next wave of growth coming from Tier 2 and 3 cities looking for diversity in original content," said Kalra.

Kalra said 50% of ZEE5's content expenditure will go towards original shows in 2022 with the remaining 50% channelled to content acquisition, including films and other shows.

"We intend to focus on family entertainment as well as regional content in the future. Our goal is to increase the popularity of South Asian content in various languages, not just in India but around the world," he said.

Amazon Prime Video also said it will double down on original content programming in India in 2022. "We have built a bouquet of Hindi content and done a few features and originals in Tamil. In the coming year, consumers will see a lot more local language marquee content in Tamil and Telugu," an Amazon Prime Video spokesperson said.

The service is also foraying into live cricket broadcasting from January 1, 2022, starting with a test series between New Zealand and Bangladesh. Amazon Prime Video had picked up exclusive rights to the New Zealand cricket matches - across One Day International (ODI), T20 and tests - in November 2020. 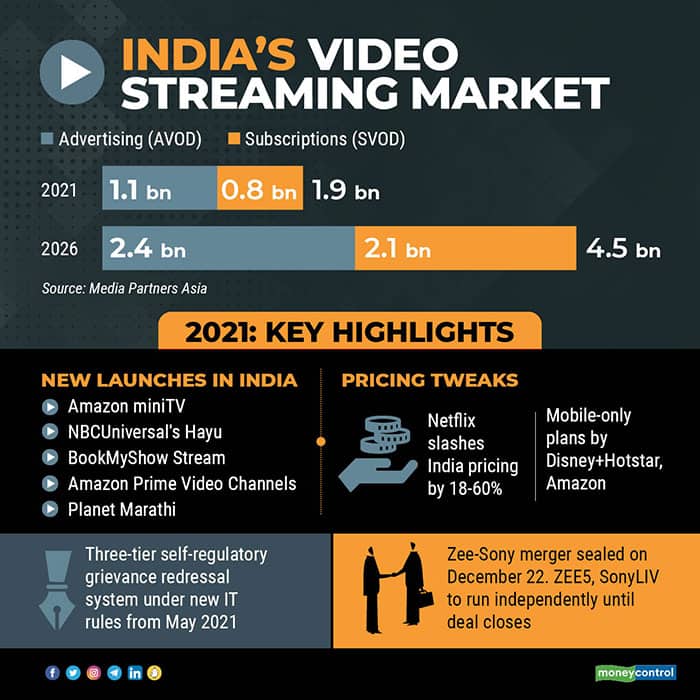 Monetising the user base is going to be a big task, said Pavel Naiya, a senior research analyst at Counterpoint Research. "Most of these players have been able to gain initial traction from (India's) largest cities, where the per capita income is much higher than that in smaller cities or rural areas. Therefore, substantially increasing the paying user base is going to be a major challenge since people are not very fond of paying for content in India," he said.

This was also one of the key reasons why Netflix recently slashed its India pricing, with the biggest drop in the entry-level plan that is now available at Rs 199 per month, as compared to Rs 499 per month earlier.

“With the recently announced price change, Netflix is now even more accessible and audiences can watch their favourite stories. We have some big titles coming up starting this month and all through 2022," a Netflix India spokesperson said. The streaming platform launched its first Malayalam superhero film Minnal Murali on December 24.

That said, these developments come after the Indian government tightened its regulatory grip on the content of these streaming platforms through the new Information Technology (Guidelines for Intermediaries and Digital Media Ethics Code) Rules, 2021 that came into effect on May 26, 2021.

Companies had to adhere to a new three-tier self-regulatory grievance redressal system with oversight by the Ministry of Information and Broadcasting; the first tier is self-regulation by the firms (publishers) and the second an independent self-regulatory body headed by a retired high court or Supreme Court judge. The government will look at cases that were unresolved at the first two levels through an oversight mechanism.

Former Supreme Court Justice Arjan Kumar Sikri, the chairperson of the Internet and Mobile Association of India’s (IAMAI's) Grievance Redressal Board (GRB), recently said at an industry event that no case has gone to the third tier so far. GRB currently acts as the second-tier self-regulatory body.

In the past year, streaming services have benefited from several prominent movies going directly to these platforms, as a result of pandemic-induced lockdowns that shut theatres in the country for several months.

Amazon Prime Video said it launched 50 direct-to-service movies and 11 originals in India over the year, while Disney+Hotstar also premiered more than dozen movies.

With theatres reopening in the country, the number of direct-to-digital releases are likely to reduce as several producers and studios would likely prefer a theatrical release. Video streaming firms are not perturbed by the development.

"Our original slate itself is so busy that the need to go out there and buy so much or to convert too many theatrical films into direct-to-service does not exist now," Monika Shergill, vice president of content, Netflix India, told Moneycontrol earlier this month.

That said, she noted that while big films will do well in theatres, most of the smaller and medium films will eventually need a slightly different model.

"There will be a slight shift where certain kinds of films will be more on streaming. These will have a watch on your screen kind of flavour, but with high concept ideas and big talent," Shergill said.

2022 will also be a year of consolidation and aggregation from a local content player’s perspective, Naiya said.

"Some of these platforms which cater to specific languages like Bengali, Malayalam, Tamil or Telugu, will serve the local audience, but when they will look to expand their reach, they will likely partner with bigger players to start offering those content on a larger scale," he said.

Punit Goenka, who will lead the combined company as its managing director and CEO, said during a conference call that both the services will continue to run their businesses independently, at least until the merger process is completed -- expected to take 8-10 months.

Increased use of technology

Video streaming platform executives also said they will increasingly use new technologies to improve and strengthen their offerings.

MX Player had announced in June that it has deployed support for H.266 video codec, which reduces the data usage for streaming videos by more than 50%, enabling users to consume high-definition video streams with significantly less data consumption.

Kalra said ZEE5 will also focus on content hyper-personalization, which uses artificial intelligence and real-time data to deliver more personalized content to users, apart from plans to create recommendation engines at scale. The company will also collaborate closely with global technology partners and content security groups to combat piracy.
Invite your friends and family to sign up for MC Tech 3, our daily newsletter that breaks down the biggest tech and startup stories of the day