'How Soccer Explains the World', and 9 more football books for the committed fan

A curated list of books on football that lovers of the game can always turn to.

For all their magnificent achievements, Lionel Messi and Cristiano Ronaldo, the biggest stars of the game today, haven’t quite set the World Cup on fire. In this picture, Argentina's Lionel Messi is thrown in the air by teammates after winning the Copa America. Reuters)

The disappointing match with which the 2022 World Cup Football tournament opened must have left many fans wondering if they would have been better off curled up in bed with a good book on football. Hopefully the next set of games in the coming weeks, including such crackers as Iran Vs USA, will revive viewer interest. If not, here’s a curated list of books on football that lovers of the game can always turn to: 1. The Fall of the House of Fifa: The Multimillion-Dollar Corruption at the Heart of Global Soccer by David Conn

Set up to promote and nurture the beautiful game, FIFA has lately been mired in every kind of scandal known to the mafia - money-laundering, bribery, racketeering, tax evasion, vote-buying, theft. Sports journalist David Conn, who writes for The Guardian, explores these accusations, eventually confronting Sepp Blatter who presided over the organization for years. In the light of the charges against FIFA for picking an undeserving host in Qatar, this is a must-read. 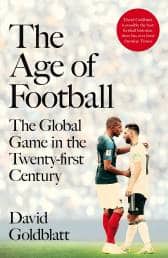 2. The Age of Football: The Global Game in the Twenty-first Century by David Goldblatt

"One billion people will watch this game; 3.2 billion, more than half the adults in the world, have watched some of the tournament. Sure, it's not a precise cross-section – more male than female, more urban than rural – but no shared moment will come closer to who we are demographically. For a month, humanity has gathered in front of screens, crowds have taken over public and private spaces, factories have rescheduled shifts and states have changed school hours, all to accommodate the football."

That’s a reference to the 2014 World Cup finals between Germany and Argentina but it could apply equally to the event under way. It is the power of football, and Goldblatt’s book explores society, politics, and economics in the twenty-first century through its prism. He was a magician on the field, a footballer whom Pele called “the master”. Having led France to its first World Cup triumph in 1998, Zinedine Zidane, was poised to go out in style as the country squared up against Italy in the finals of the 2006 edition. It could have been one of the most fairy tale endings in all sport. Instead it ended up with Zidane red carded after head-butting Italian Marco Materazzi and 10-man France losing on penalty kicks. Zidane retired soon after, a villain to many only to stage a spectacular revival years later as the manager of Real Madrid. That really sums his brilliant but erratic career, three FIFA World Player of the Year awards and a Ballon d’Or but also 10 red cards even before the one in Berlin on that fateful night. Fort and Philippe’s biography brilliantly captures the complexity of this deeply introverted man 4.  Messi vs. Ronaldo: One Rivalry, Two GOATs, and the Era That Remade the World's Game by Joshua Robinson and Jonathan Clegg

For all their magnificent achievements, Lionel Messi and Cristiano Ronaldo, the biggest stars of the game today, haven’t quite set the World Cup on fire. Both men are playing what will likely be their last edition of the final test of a footballer. Victory will seal their standing among the game’s greatest. Failure will leave people questioning whether they choked on the big stage. But it won’t dim their amazing stories.

In this book, Wall Street Journal reporters Joshua Robinson and Jonathan Clegg look at the unusual link that binds the two. It examines their shared legacy highlighted by winning the Ballon d’Or, an award given to the best male footballer in the world, more often than any other footballer in history. The greatest of them Marco van Basten, Johan Cruyff, Michel Platini have won it 2-3 times. Between 2008, when Ronaldo first won the award and 2022, the pair has claimed 12 of the Ballon d’Or awards between them. It’s a dominance and rivalry unparalleled in football. 5. Football Leaks: The Dirty Deals Behind the Beautiful Game by Rafael Buschmann

A game as beautiful as football has unfortunately been tarnished beyond recognition by the scandals and the scams that have emerged over the years. The most explosive of these leaks came in 2016 when an anonymous football fan leaked some 18 million confidential documents, exposing the dirty underbelly of the sport, to German newspaper Der Spiegel. The documents revealed the clandestine dealings of top clubs, players and agents and covered details of player transfers, the loopholes and opaque tax structures that ensure maximum earnings for players and agents, as well as the many questionable deals in the business. It isn’t a pretty story and will certainly come as a shock to a diehard fan. But it is compulsory reading to understand how power in sports corrupts.

6. How to Win the World Cup: Secrets and Insights from International Football’s Top Managers by Chris Evans

How should a country go about planning to win the World Cup? Simple. Ask the 20 managers who have guided their squads to World Cup glory. They are the only ones among the 350 who have taken charge of their national teams to achieve the rare feat and you would imagine they know a thing or two about it. This book is about the innovations in tactics and strategies along with the bizarre superstitions and psychological masterclasses that these managers deployed in pursuit of the coveted trophy. Chris Evans quotes Roberto Martinez, manager of the Belgium team that reached the semi-finals in 2018 who summed up the role: "You'll never find a national team that wins a World Cup by coincidence or by accident and that's the work of a national team manager." 7. How Soccer Explains the World: An Unlikely Theory of Globalization by Franklin Foer

This is a slightly unusual book where the author uses soccer to explain the effects of globalization on society in various parts of the world. Football is a funny little game with very simple rules such that little boys and girls can play it easily with minimum coaching. Yet, its principal characters have included men like Silvio Berlusconi, the President of Italy and AC Milan, a storied club that sank into mediocrity before being restored to former glory by American investment firm Elliott Management. It is also a game that is still rife with sectarian conflicts and anti-semitism and has hordes of hooligans as committed fans, ever ready to resort to violence inside and outside stadiums. Foer, a staff writer at The Atlantic and former editor of The New Republic, deftly interlinks many of these tendencies with the larger problems of our world to make the point that it is more than just a game. 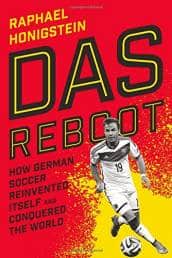 8. Das Reboot: How German Soccer Reinvented Itself and Conquered the World by Raphael Honigstein

After winning the World Cup in 1990, German football went into a period of sustained mediocrity marked by quarter final exits in the next two editions. But by 2002, it had made a remarkable turnaround, finishing runner up that year, followed by a third-place finish in the next two editions. The return from the mediocrity of the 1990s was complete when it won the 2014 World Cup in Brazil. On the way it beat the host nation 7-1 in one of the most vivid examples of attacking football that’s ever been seen on the big stage. Honigstein’s book traces the transformation of German football from the dour, defensive-minded game that its teams played in pursuit of efficiency but lacking in flair and creativity to the aggressive and free-flowing game we saw in 2014. 9. Football in Sun and Shadow by Eduardo Galeano

Described as an “emotional history of World Cup football”, this book by celebrated journalist, novelist and author Eduardo Galeano who underwent brief imprisonment during the Uruguayan military coup of 1973, is a pure unabashed celebration of football’s geniuses, mavericks and bravehearts. Galeano profiles dazzlers like Franz Beckenbaur, Lev Yashin and Zico, but also tragic figures like Pablo Escobar, whose own goal for Colombia was punished by gunning him down in the streets of Medellin.

This book is straight from the heart and appeals to the heart as well. After all, Galeano echoes what every football fan feels: “I have finally learned to accept myself for who I am: a beggar for good football. I go about the world, hand outstretched, and in the stadiums I plead: A pretty move, for the love of God.” 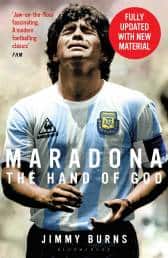 10. Maradona -The Hand of God by Jimmy Burns

No book on the World Cup can ever be written without substantial space devoted to the one man who made the stage his own. Nor can a list of books on the game be complete without at least one on the little boy who emerged from the slums of Buenos Aires to set the footballing world on fire with his artistry and talent. Diego Maradona is to football what Steve Jobs is to technology or Leonardo da Vinci is to art, incomparable geniuses all. Burns’ biography, though, goes beyond Maradona’s professional success and looks at his roller coaster ride as winning captain of the Argentinian team in 1986 as well his painful spiral into drugs that ultimately led to his inglorious exit from the tournament in 1994.