Union Minister Smriti Irani is a proud mother as praise pours in for her daughter’s culinary skills at a Goa restaurant. Irani took to Instagram to share food writer Kunal Vijaykar’s positive review for Silly Souls Restaurant, where he was given the tour by Zoish Irani.

Kunal Vijaykar, in his Instagram post, shared four pictures of the dishes he was served at Silly Souls Restaurant, which is located in Assagao, North Goa.

“My craving for Asian food has got me to Silly Souls Goa,” he wrote.

“And to my surprise, apart from the yummy and delicious Asian spread, the owner has a superb menu of Italian food as well,” he continued, adding that he ordered Smokey Pork Ribs, Pad Kra Pao, Momo Jhol Chicken and Silly Chilli Chicken at the restaurant.

Sharing his review on Instagram Stories, Smriti Irani wrote: “So proud”. She also tagged her daughter and the restaurant’s Instagram page. 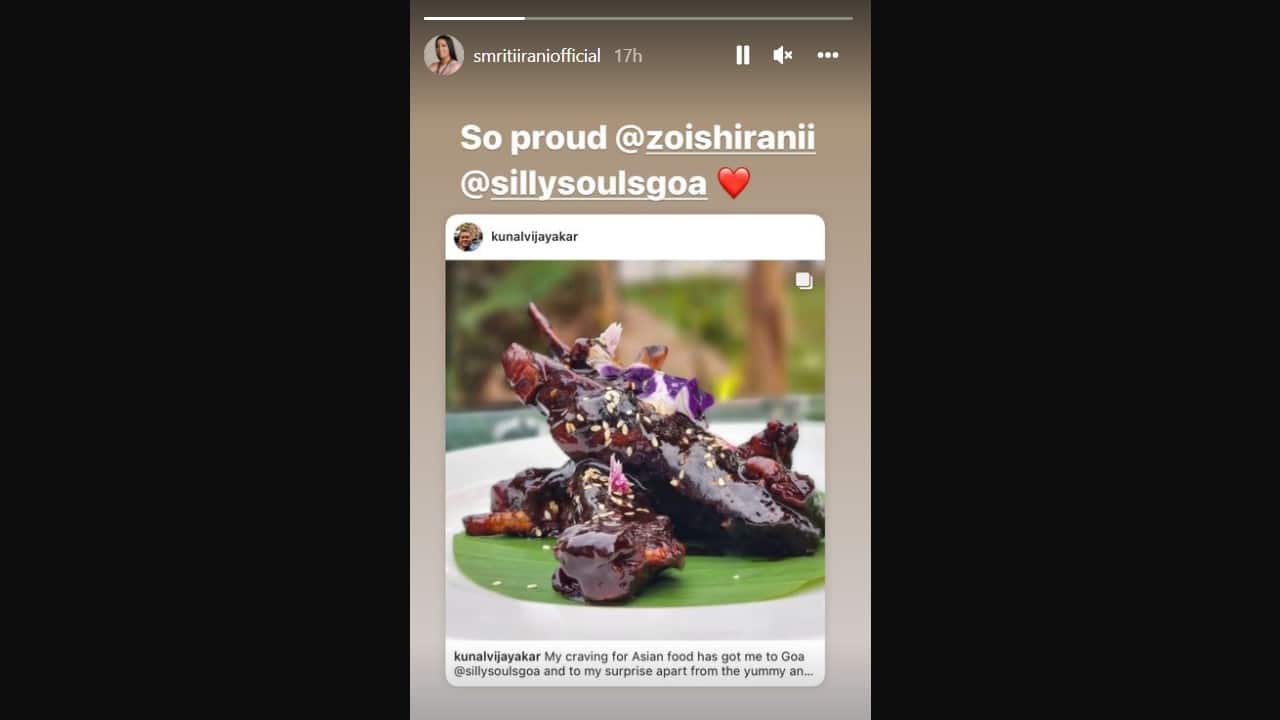 Last year, Irani had shared a message of praise for her daughter Zoish, writing about how she chose to carve her own path and get into culinary arts, despite being told that it was a career choice for people who are not academically bright.

“When she picked the culinary arts as a career there was a murmur and she was told academics pe dhyan do (focus on academics),” wrote Smriti Irani for her daughter. “Khana toh waise bhi pakana hi hai usme kahan career banega , academically bright na ho toh chef bano (Cooking is not a career. Become a chef only if you are not academically bright),” she was told, according to the minister.

Despite the opposition she faced, Zoish went on to score well in her Class 12 Board Exams - she got 91% - and stuck to her resolve of becoming a chef.

“[Zoish] said becoming a chef is not an option but a choice. Zoe is my Monday motivation,” wrote Smriti Irani.

This article was edited after the Bombay High Court concluded that Irani, her daughter or her family are not the owners of "Silly Souls Restaurant" in Goa.
Moneycontrol News
Tags: #Goa #Smriti Irani
first published: Apr 14, 2022 04:14 pm