Award-winning author and poet Mieko Kawakami on patriarchy in Japanese society, and her new bestseller 'Breasts and Eggs'.

Award-winning Japanese writer and poet’s first full-scale novel to be translated from Japanese into English, Breasts and Eggs (Europa Editions 2020) has created waves in the literary circuit and been hailed as “breathtaking” by no less than Haruki Murakami.

An intimate journey of three working-class women, the novel looks at inherent gender biases in Japan, and their impact on ordinary women trying to live life to the fullest.

In this interview with eShe, the 44-year-old Osaka-based writer talks among other things about the themes of contemporary womanhood she explores in her book, conservatism and patriarchy prevalent in Japanese society, and how the COVID pandemic burdened women further.

Tell us briefly about your journey as a musician, then a poet and popular blogger, and now an award-winning novelist.

They’re all different lines of work, but I think they’ve all been creative outlets for me. An editor who listened to my music and read my blog asked me to write some poetry; another editor read my poetry and reached out to me about writing a novel. That’s how it all developed.

My debut novel was nominated for the Akutagawa Prize, a famous award for new writers in Japan, and I won the award the next year. That was 12 years ago.

Tell us about some of the themes of contemporary womanhood (single motherhood, cosmetic surgery and infertility) that you have explored through your three women characters in Breasts and Eggs.

People call Breasts & Eggs a “feminist” novel sometimes, but I feel like I wrote the whole book about problems affecting everyone in contemporary Japan—not just women. It’s about more than contemporary womanhood; themes like class, poverty, reproductive ethics, and antinatalism run through the story.

Women are obviously people, just like men are. But women have faced discrimination and social exclusion for centuries just because they’re women.

When you start writing seriously about the dynamics of that reality, the suffering and the overcoming, feminism is something you naturally get into. You can’t write around it—you have to go through it when you talk about the full human experience. Feminism is a human issue, essentially. 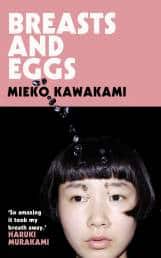 What are some of the notions and stereotypes about motherhood that the book addresses and hopes to break?

I have my own personal opinions as a private citizen, but novels are narratives—not opinion pieces. If this book has a message, it’s just that I want people who’ve engaged with the narrative to see the issues as their own and keep thinking about what they’ve read.

I want perceptions of Japanese literature to change, too. It gets frustrating to see how a lot of media outlets and readers abroad have this kind of uniform, one-dimensional take on Japanese literature—it’s an extension of Orientalism, in a lot of ways, like Japanese writers are “the nice little neighbors with heads full of weird, quirky things.” Breasts & Eggs doesn’t even come close to fitting into that mold.

Has the Covid pandemic burdened women further? Are there any particular worrisome trends that you have noticed about women’s rights being degraded due to the pandemic?

When the schools shut down, women found themselves having to do even more to handle things at home and meet their children’s needs. The outbreak hit non-regular workers—a segment where women are by far the majority—especially hard. A good number of non-regular workers are in the medical field, too.

Would you characterise Japanese society as being conservative when it comes to women and sex?

Japanese society really pushes being conservative on you, regardless of what your individual views are. There’s always an idea of how things “should be”—what you wear and how you act and how you talk—and people start internalizing those standards at a young age.

That’s the environment Japanese people grow up in, and there are so many reminders of just how strongly the old gender roles continue to function in that context.

What is the perception of modern single women in Japan? Does society look down upon women who are not perceived as fulfilling the gender roles ascribed to them by traditional society?

There’s a big generational divide, I think. Young people are buying less and less into the whole idea of marriage defining your character, but you wouldn’t believe what some of the old men in political power have said: that women need to have at least three babies each, for example. Those are the people leading the country. The reality, though, is that getting married and having children isn’t the “matter of course” that it used to be. You can’t take that progression for granted any more. Young people don’t have jobs or money—the gaps in society are just getting bigger.

Would you characterise Japanese society as being male dominated and patriarchal? What has been the effect of economic growth on the lives of women, working as well as non-working?

It’s definitely a male-centered society. Japan still uses the traditional family-registry system, which robs women of their family names when they get married. Women can’t even buy birth-control pills at the drugstore. There’s just a lack of basic rights for women.

I do think social media has helped shine a light on the issues, though; people’s perceptions are slowly changing. But it’s virtually impossible to get through to the men of the older generation. They simply don’t know what the problems are. They just want to keep on reaping the benefits of the vested interests they’ve had for so long. All we can do is hope that education improves.

This book has created a flutter in literary circles around the world. Has the advent of automated translation helped bring out more diverse voices onto a global platform? Do you think a talented translator is still the key factor in a translated book’s success?

Automated translation might be good for getting the basic gist of something across, but that’s exactly what reading and writing novels isn’t about. While it might help in some situations, I really don’t think automated translation can capture a writer’s voice and render it a different language.

A translator is another author in a different language. Working with my translators, I feel like there’s this special, close bond that I don’t find in my relationships with editors or friends or even family members. Translators mean so much to me. I owe them a lot.

Which are some of your all-time favourite books?

Some of my favourites are Ichiyō Higuchi’s Takekurabe (translated as Growing Up or Child’s Play), which is a classic of Japanese literature, Haruki Murakami’s The Wind-Up Bird Chronicle and Nietzsche’s Beyond Good and Evil. There are many more, of course.

Who are some of your favourite contemporary writers?

Ferdinand von Schirach (a German writer) and Haruki Murakami are two of my favourites.

(Translated from Japanese by Tom Kain)