Apologies sometimes reveal more about the issuer than the original offence. It’s best to issue them sparingly and genuinely, otherwise they can unravel the issue.

Not all apologies are welcome; some can leave a situation worse than it was to begin with. (Illustration by Suneesh K.)

When actor Siddharth apologised to Saina Nehwal this week, he put out a letter that he probably thought was pretty generous and well-worded. It didn’t go down well and was met with considerable opposition from several quarters, some ideological and others just offended at the apology itself.

All apologies aren’t welcome and they can leave a situation worse than it was to begin with. We have become a society where apologies are issued as tokens, statements by people who have not bothered to gauge the damage they inflict, to counter cancel culture, or to just retain their jobs, image, and appear to be doing the right thing.

Apologies are not a virtue. They need to make reparations and be genuine. Psychological research by Roy Lewicki, Beth Polin and Robert Lount Jr. in 2016 found that the most compelling apologies contain six elements: regret, explanation of what went wrong, acknowledgement of responsibility, repentance, offer of reparation, and a request for forgiveness. The most important of these was found to be owning up responsibility for the mistake.

The ‘You Started It’ Apology: Don’t issue an apology that blames the person you are apologising to, even partly. When Siddharth begins his letter by apologising for what he said ‘in response to’ the badminton champion’s words, what he is actually saying is ‘you started it’. Why this is problematic is if you genuinely believe the person you are apologising to began the issue and that rendered it worthy of a response, you don’t seem to own any responsibility or even genuinely consider it worthy of apology, you just wish you had worded your insult better. Your first line has nullified anything that comes after. The ‘if’s and ‘howevers’ in the rest of the letter nail the contradiction even further. In spoken apologies, we liberally use ‘but’ ‘if’ ‘however’ and ‘although’. These do not make for an apology. These make for an excuse.

The 'I’m Sorry You’re Offended' Apology: You should not offer an apology if you’re only apologising for the outcome of your offence. For instance, someone who is apologising for infidelity who may only be apologising for being caught or for the feelings of hurt they have inflicted on a partner, and doesn’t regret their actions. If you’ve insulted someone with an expletive and are only apologising for using offensive words, but you do genuinely mean to denigrate their thought process, ideology or actions, then your apology is only for the words used. When you then add praise for who they are in the apology “champion” “hold you in high esteem” “I have the greatest respect for you”, etc., it rings inauthentic. You don’t really respect their choices, so why say you do? It only adds insult to injury because now you’re telling them their stupid enough to believe fake flattery. Notice how the initial offence has now been compounded?

The 'What I Really Think of You' Apology: An apology is ineffective when you have revealed personal prejudices and how you apply them to the person. Let’s say an expensive fountain pen is missing from your work desk and you accuse someone of stealing it. Then you find it at home later. You might issue an apology but now you have shown the person you accused that you consider them someone who is capable of stealing i.e. you have a really poor opinion of their character, social class, caste, race, or religion. In short, you don’t think very much of them. No amount of apologising will restore the respect in this relationship.

The Political Apology: An apology is meaningless if you simply meant to insult the person. You’re recapitulating because you have lost face socially by insulting them and there is a backlash you’d like to protect yourself from. In this case the apology becomes a political statement or move. In being so, it serves your interest and not that of the offended party. This is why nobody believes those accused in scams, scandals or the #MeToo movement when they apologise because it’s only a façade erected to resurrect a dying career.

When you mean to apologise, if you’re unwilling to spend some time understanding the other person’s perspective, it’s best to stay silent. 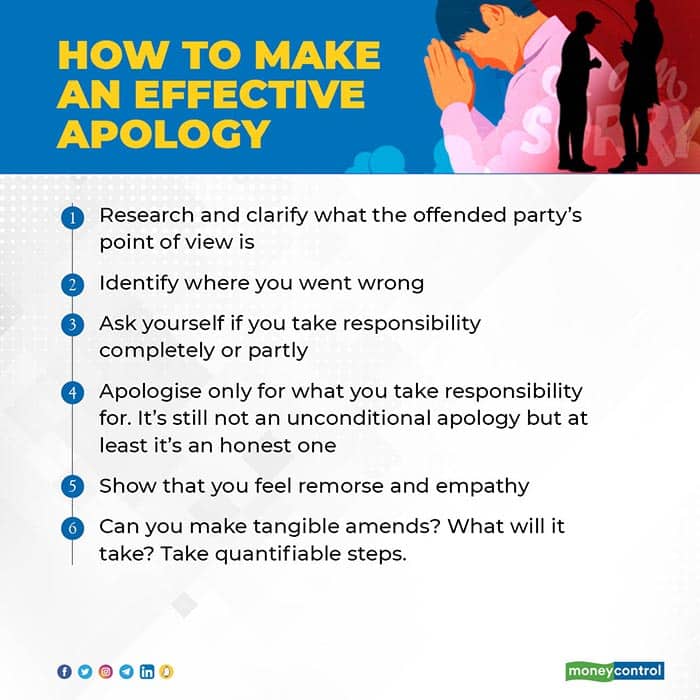 Checkout Budget Highlights 2023
Gayatri Jayaraman Gayatri is a mind body spirit therapist and author of 'Sit Your Self Down', a novice’s journey to the heart of Vipassana, and 'Anitya', a guide to coping with change. [ @G_y_tri]
Tags: #apology #Healing Space #mental health
first published: Jan 15, 2022 07:19 pm