Tenzin Tsundue is at the forefront of public advocacy against Chinese occupation.

Tenzin Tsundue is a poet on a mission. His words are not meant to delight or entertain; they are written to serve the Tibetan freedom struggle. Born and raised in India as a child of refugees from Tibet, Tsundue is at the forefront of public advocacy against Chinese occupation.

He seeks no accolades, only liberation. Now a man of 46, he is out on the streets walking from Dharamsala to Delhi urging the government of India to repeal its ‘One China’ policy. He began the journey on February 12, and plans to complete it on March 10.

In a press note on his website, he explains, “The main aim is to bring India’s focus on Tibet, the missing link in the India-China crisis. Our Indian brothers and sisters need to understand the reasons for China’s constant threat to India. China is creating border disputes not only with India, but also 14 of its other neighbouring countries.

China’s imperialist designs not only aim to expand its land and sea territories, and Xi Jinping has proved to all that the real aim of the People’s Republic of China is to strategically become the global super power.”

As a poet, Tsundue wears his political convictions on his sleeve. He believes in creating awareness about his cause through face-to-face contact with Indians from various walks of life, not only fellow poets and artists of other kinds.

His route has been neatly mapped out to accommodate stopovers in Mohali, Panchkula, Chandigarh, Karnal, Ambala and Sonepat where he reads out his poetry, distributes pamphlets in three languages (English, Hindi and Punjabi), and invites people to walk along with him if they feel moved to support him.

In the book Kora: Stories and Poems (2002), which is perhaps his most widely read publication, Tsundue offers a heartfelt dedication that states: “My forehead at/ thy feet/ I bow to thee/ the freedom fighters of Tibet/ who never gave up/ on their dreams.” It was published by Tibet Writes, a Tibetan writers’ circle with the specific mandate of publishing the creative work of Tibetans. Instead of waiting for a high-profile publishing contract, he has been publishing at a small scale and disseminating his work offline and online. 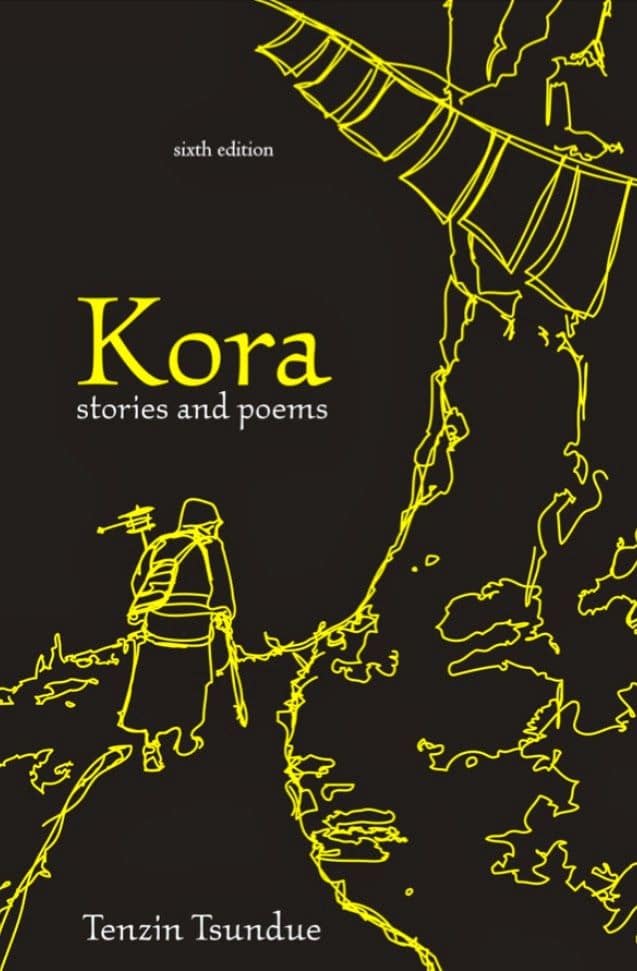 Tsundue’s poetry is informed by personal experience, not empty rhetoric. The poem “My Tibetanness” – which is part of this collection – captures the hardships of a life lived in exile. He writes, “We are refugees here./ People of a lost country./ Citizen to nation./ Tibetans: the world’s sympathy stock./ Serene monks and bubbly traditionalists;/ one lakh and several thousand odd,/ nicely mixed, steeped/ in various assimilating cultural hegemonies.” Tsundue completed his formal education in Himachal Pradesh, Tamil Nadu and Maharashtra. His family lives in Karnataka and Uttar Pradesh. India is a temporary home.

As a Tibetan who has been living in India, Tsundue believes that it is important to engage with Indian people and not only the Indian government. He uses the slogan “Jai Bharat! Jai Tibbat!” to highlight the strong bonds of friendship shared by Indians and Tibetans.

In an interview with Ajit Baral, published in the Bangladeshi newspaper Daily Star in December 2003, Tsundue says, “No nation would intervene in political matters unless their interests are at stake or a benefit can be reaped from in-between.” This explains his style of activism.

Tsundue wants Indians to vocalise their opposition to a ‘One China’ policy by participating in a signature campaign. In his appeal asking them to walk with him for a mile, he writes, “Beijing continues to stake claim to the entire state of Arunachal Pradesh, parts of Ladakh, Himachal, Uttarakhand, and Sikkim, and has dragged India to the UN on Kashmir.”

Indians, who are unaware about the Tibetan diaspora in India, and their long history of protest against Chinese occupation, might take notice when their own security is under threat.

Crossing the Border (1999) and Semshook: Essays on the Freedom Struggle (2007) are two other books written by Tsundue. His literary output is firmly grounded in the community that he lives in.

The language is simple, direct and unpretentious. It seeks to communicate, not insulate itself in a gilded prison. Each book reverberates with the fire of nonviolent resistance. Tsundue does not set himself up as a hero or saviour. He always places himself in the collective, and does not lose sight of his goal, which is independence for Tibet.

In the essay “Lathi Charge and Dal Roti: Estimating Our Activism” – which is part of Semshook – he writes, “Jail is a novel experience and I strongly recommend it for your personal growth. I have been to five different prisons and each has been a unique experience.

It’s an honour receiving a jail term, however small, for having worked for a cause as noble as a freedom struggle. Here, even robbers, murderers and cheats respect.” Perhaps it is this sense of humour that keeps him going, for there are miles to go before he sleeps.
Chintan Girish Modi is a writer, educator and researcher who tweets @chintan_connect)
Tags: #One China' policy #Tibet #weekend reads
first published: Feb 27, 2021 08:10 am