The London house of the Hinduja brothers, Carlton House Terrace, was originally built to finance the transformation of Buckingham House into Buckingham Palace.

In 2006, the Hinduja brothers bought 13-16 Carlton House Terrace for £58 million. They spent another £50 million on renovating the 67,000 sq. ft home which was formally opened in 2011. Over 300 people were invited to the housewarming party, but it was a few more years before the Hindujas moved in completely. The family was reluctant to leave their more modest 25,000 sq. ft abode - just opposite Carlton House Terrace - where they had lived for over 30 years. The four brothers Srichand, Gopichand, Prakash and Ashok who control the Hinduja Group do believe in lucky charms.

But now the 25-bedroom property, which comprises four interconnected six-storey Georgian Houses, designed by architect John Nash with its classical cornices, French polished timber, and ceiling roses is where they host the high and the mighty. It is easy to get dazzled by its current grandeur, but the Carlton House Terrace has an interesting history which links it very closely to the Buckingham Palace, which is also just a few minutes away.

Carlton House Terrace came up where once stood Carlton House which was the official London home of George IV (1762-1830), since 1782. Characterised as extravagant and profligate, he arm-twisted his father, the mad king George III, into financing his quest for costly refurbishments and the finest décor, when grants from the Parliament were not enough. Carlton House became the high point of the late Georgian era sex-capades and misdemeanours, a contrast to the official court of George III. One key reason for his mounting debts was his fascination with architecture which was fuelled by his friendship with John Nash. Apart from constantly refurbishing his own Carlton House, he got Nash to remodel the Royal Pavillion, his seaside retreat in Brighton. Its domes and minarets brought the exotic Indo-Islamic influence on English shores, and it is now among Brighton’s most distinguished buildings.

When George IV took over the crown in 1820, he set his eyes on Buckingham House, the private residence of his mother Queen Charlotte which was popularly called the Queen’s House. It was George IV who remodelled the Buckingham House into Buckingham Palace for which he again turned to Nash. The monarch’s obsession with alterations and repairs caused immense discomfort to Parliament due to the strain on public finances, especially as he had turned down the initial choice of Nash’s competitor Sir John Sloane.

There was perhaps a limit to the king’s avarice. A deal was made in 1826 - the Parliament agreed to the extensive remodelling of Buckingham Palace,  but Carlton House had to be demolished. Nash was again pressed into service to open up the Carlton House site to the public. The proceeds of the leases sold to magnates were to contribute to the Buckingham Palace refurbishment. It was one of many such projects that Nash (and other architects) undertook to extract money from the rich, except this one was to directly fund a monarch.

Nash, who also heavily speculated in property, drew up ambitious plans that laid the ground for Carlton House Terrace. Over 150 years before the Hindujas bought a slice of Carlton House Terrace, the original plan entailed a total of six terraces of houses. But in the end only two were made, along the north of St James’s Park – the western terrace (No 1 to 9), and the eastern terrace (No 10 to 18). Between the two wings, Nash had planned a large domed fountain, but eventually it came to be occupied by Prince Frederick, the Duke of York’s, column.

Thus 13-16 are part of the eastern terrace, and among the famous former residents of Carlton House Terrace are Lord Palmerston, Lord Curzon, William Gladstone. But there are plenty of other historical figures who may have not been residents but are present around in statues due to public and state munificence. Guarding the eastern terrace is Lord Lawrence, the Viceroy of India (1864-69). There are plenty more to be seen with every step you take.

The terraces were built as a combination of classical architecture with landscape design meant to cater to the tastes of the territorial magnates who came to occupy them. Now, territorial magnates have given way to international businessmen exemplified by the Hindujas, and an Arab sheikh who is known to own a house in Carlton House Terrace, but whose identity is still not known. However, it is not just statues that surround Carlton House Terrace. Piccadilly Circus, London’s equivalent of New York’s Times Square that provides ample shopping opportunities, Charing Cross and Trafalgar Square are all close by. 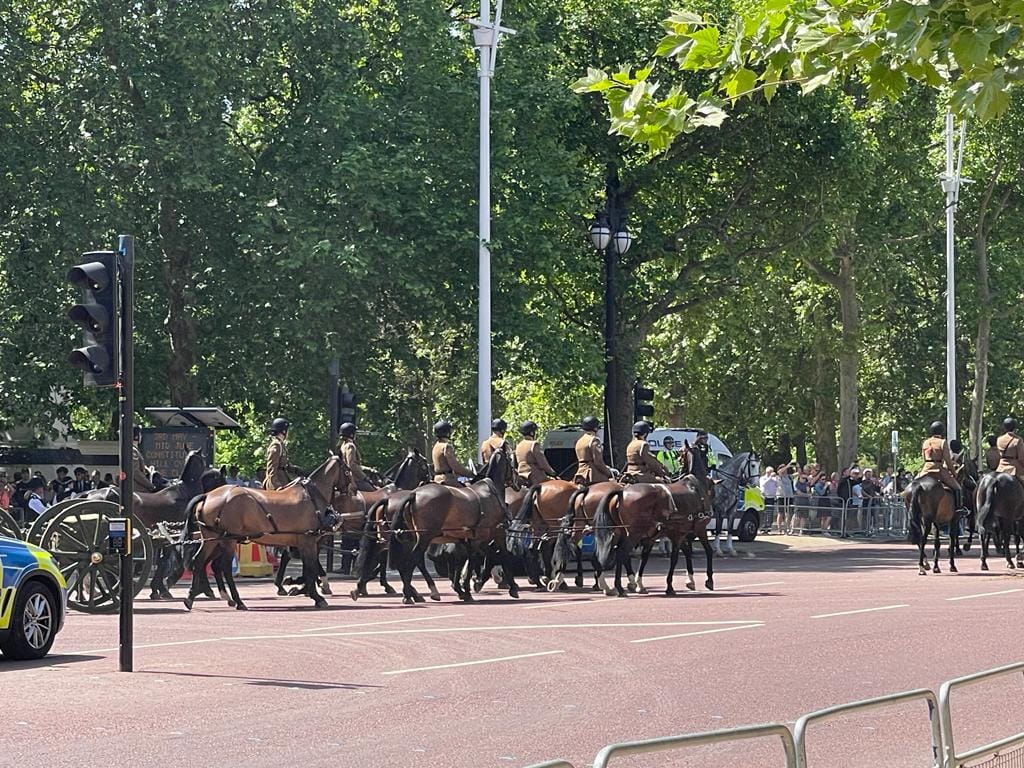 Scenes like this are visible from the rear of the Hinduja brothers' London home. (Photo: Danish Khan)

By virtue of combining four houses into one, the Hindujas clearly occupy the largest space in one of the most desirable addresses in London’s West End. However, 14 and 15 were amalgamated way back in 1845, creating a single large house. But 16, 17 and 18 Carlton House Terrace were constructed in the 1860s after Nash’s death and bore the imprint of Owen Jones, another famous architect of the Victorian era. Hence, No 16 has a Graeco-Moorish interior scheme which sets it apart.

Due to his impeccable taste and personal manners, George IV was also known as the ‘First gentleman in Europe’ although his conduct and rule stood in contrast with the teeming millions who toiled to make the Industrial Revolution possible. The house gives a glimpse to Britain’s strength in industrialisation through the deployment of iron beams, castings iron, and hydraulic stucco made of Roman cement.

As the Carlton House Terrace overlooks The Mall and St James’s Park, the design is such that the houses appear as appropriate street frontage and provide the backdrop to important state functions. Thus it is no surprise that the rear of the Carlton House Terrace with its majestic pillars is far grander than the entrance. When a tourist walks down on The Mall, they would most likely think that the inhabitants would be members of the royal family, foreign diplomats, or senior civil servants.

During the Second World War, German bombers caused damage to Carlton House Terrace, and 13, 14 and 15 were used by the British Red Cross. At one point in the 1950s, there were talks of pulling down Carlton House Terrace to make way for structures designed for government departments. But several lawmakers and architects spoke of the need to preserve the attractive friezes, columns and the pediments.

For a few years stretching over the 1960s, the  National Portrait Gallery used the three houses as office and storage, which strengthened their appearance and enhanced the possibility of being taken over as one unit. At that time, the conventional wisdom was that Carlton House Terrace could no longer be used for great, private residences. The post-war austerity and income levels meant that comfortable, and easy to maintain flats were more popular than grand mansions with liveried servants.

Before the Hindujas purchased it, the premises were used as headquarters by the Crown Estate, the freehold owner of the Carlton House Terrace land and the body which manages the crown property, for over 30 years. They added number 16 to the already linked Numbers 13-15, and then decided to sell them as private residences. Bids were submitted by billionaires from around the world, all of whom were left behind by the Hindujas. The family was residing on the opposite street in a four-floor building and perhaps always had an eye on the Georgian townhouses. At Carlton House, they have four floors and two storeys of basement.

Large sections of the house have marble walls and Italianate designs which were very popular in grand English houses. Some areas have paintings which provide a glimpse of London in the nineteenth century. Needless to say, they are now complemented by Indian motifs, Hindu gods and family heirlooms.

As the buildings were used by drab offices, architects and developers worked to provide for formal entrance hall at the ground floor during the refurbishment. The basements were converted into swimming pool and cinema room. The second floor of Nos 13, 14 and 15 have a suite of bedrooms and family rooms, and there are lifts within the property to connect them to various areas. Painstaking restoration of the roofs and fireplaces was done with immaculate care. A statue of Lord Lawrence, the Viceroy of India from 1864-69, at the entrance to the eastern terrace. (Photo: Danish Khan)

A five-year alteration for a Grade 1 listed structure meant working very closely with bodies like English Heritage, the body that looks after historic sites in the country. The house also has a 130-bulb Murano chandelier which is said to be serviced by technicians from Venice twice a year. As mentioned earlier, Carlton House Terrace is surrounded by statues, but the one that is closest is that of Queen Victoria, it's right at the entrance. The Empress of India will stay put, but the family, much after they purchased the property, got three sets of handrails to enhance accessibility, reportedly after an inhabitant had a fall.

It is here that the Hindujas have hosted prime ministers and presidents, sports stars and Bollywood celebrities. They have struck deals and brokered negotiations. And after a two-year break due to Covid, there is a possibility of a grand 2022 Diwali celebration. The Hinduja group is a truly multinational conglomerate; multiple expansions over the years did not give rise to succession battles. That has now changed. Cracks have appeared in the public in the last two years, but visitors insist that the famed 30-seater table in the 46-foot dining room still exists. The family's top spot in the Sunday Times UK Rich List is testimony that they are very much together. A division would certainly mean that the brothers would slide down the list rapidly.
Danish Khan is a London-based independent journalist and author of 'Escaped: True Stories of Indian fugitives in London'. He is researching Indian capitalism at University of Oxford.
Tags: #Ashok Hinduja #Buckingham Palace #Carlton House Terrace #Gopichand Hinduja #Hinduja brothers #Hinduja Group #history #Prakash Hinduja #Srichand Hinduja
first published: May 21, 2022 12:39 pm