Creative and fine-art photographer Leena Kejriwal has helped raise awareness about sex trafficking through her unique art and technology project Save Missing Girls.

Leena Kejriwal found herself confronting a unique problem when NGOs working in the field of prostitution and human trafficking reached out to her as a fine-art photographer. They were up against a frustrating fact: prostitution is demand driven. “As long as the common man on the street continues to come and buy sex, it’s difficult to keep the girls out,” explains Leena, who decided to bring another language to the fight against sex trafficking.

And so the Kolkata-based artist launched Save Missing Girls, a project that aims to raise awareness about sex trafficking through art installations, photography and technology. Coming from a traditional Marwari family, she had grown up in a patriarchal structure, which she thinks strengthened her understanding of the role society can play in a girl’s life. Further, being an artist, she believes in the power of the graphic language to connect with the public. “So, when I set out to create a public artwork, I wanted it to be so graphic, minimal and easy to grasp that it should have the ability to cross all vernacular boundaries to engage the masses on the issue of sex trafficking,” she says. The project makes girls go from disempowerment to feeling empowered to taking agency for their lives, and then fighting to make it better. “Why should we wait for a girl to get trafficked to save her?” questions Leena, who has developed a systematic school programme for municipal, public and private schools.

They are also empowering helpless victims of domestic or alcohol abuse in West Bengal. “These girls are totally vulnerable to trafficking. We provide them skill training as well as a market for the goods they create, so that we can empower each one of them and shake the status quo in remote Sundarbans, which accounts for 44 percent of India’s trafficking victims,” she informs. 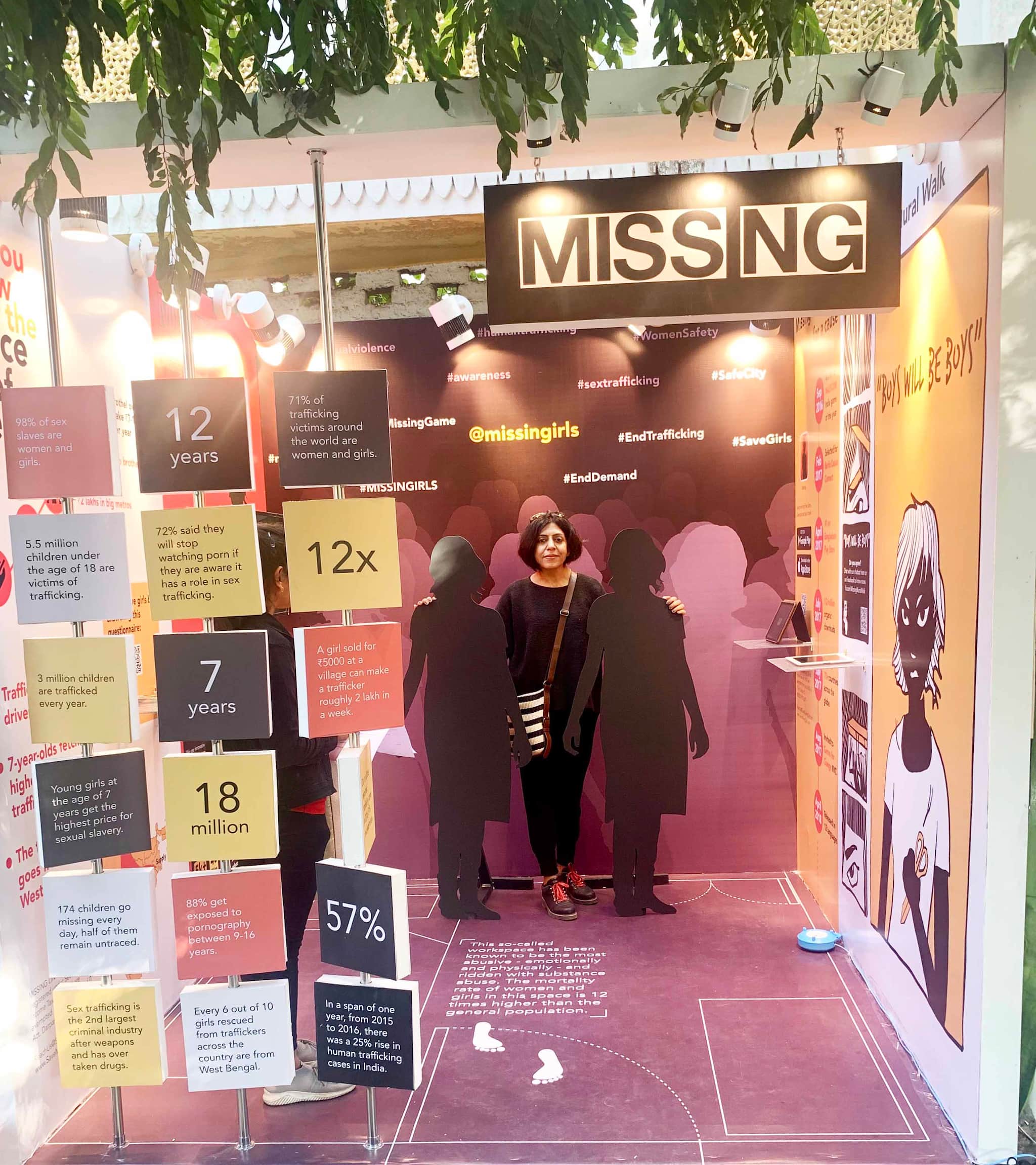 Leena set out to first make the public aware of an issue they are responsible for. “Art was the only language I knew. I wanted to create an artwork that was simple to understand and would move people enough or raise curiosity about what it was trying to say,” she says. It was with this focus that she created the Missing Girls silhouette, an integral part of their awareness programmes. Constructed around a very visual medium and storytelling narrations, wherein missing stencils have been left behind on the walls of the community and schools, it is made with the intent that people never forget what could happen and their importance as changemakers.

Leena believes that public art has the potential to create user engagement and social change beyond just adding beauty to the city. The ‘Missing Girl’ silhouette has now become a part of a bigger guerrilla art movement. “It’s proving to be a very powerful medium. It has also served its purpose for an initial dialogue and is a silent yet powerful argument in a public space,” she says. Recently, the team conducted a school awareness programme in 15 states, including the Sundarbans. A few months ago, a girl on the verge of becoming a child bride came upon the artwork. She called up the police and told them that she was being forced into marriage. They were able to stop it. “Curbing a grave issue such as child marriage plays a very important role in curbing the demand for trafficking girls,” says Leena.

Leena has also developed a one-of-a-kind interactive smartphone role-playing game called Missing. The award-winning game is designed to allow players to experience what a missing person goes through when trafficked into prostitution. In it, the player is actually put in the shoes of the girl. Her main quest is to escape.

With one million players across the world in more than 70 countries, the game has received a tremendous response. Players from across the world have been shaken by it, and the team has received many requests from volunteers who want to help their cause. It helped them build an army of thinkers and do-gooders. They have also now launched 12 vernacular versions in India. These will give them insights into behavioural patterns of the Indian population, which will further their research on how to address various pain points in society.

“People need to understand that they are, consciously or unconsciously, creating a world that enables sex trafficking. Till we don’t make any change in the demand, there will be supply,” she cautions, adding, “Awareness equals prevention.”