Ali Fazal on 'Death on the Nile', colour-blind casting, Mirzapur S3 and more

The Death on the Nile actor Ali Fazal is glad he got to share notes with Kenneth Branagh, who has received seven nominations at the 2022 Oscars for 'Belfast'.

Gal Gadot and Ali Fazal in 'Death on the Nile', based on Agatha Christie’s popular book. The film released in India on February 11, 2022, and is currently playing in theatres.

From a small role in Furious 7 in 2015, Ali Fazal has gone on to play substantial parts in international projects. The actor’s latest release is the Hollywood movie Death on the Nile based on Agatha Christie’s popular book. The star-studded whodunit also stars Gal Gadot, Arnie Hammer, Tom Bateman and Russell Brand, among others, with director Kenneth Branagh reprising his role as detective Hercule Poirot. Ali, who has recently also donned the producer’s hat, spoke about his projects and straddling Indian and international cinema.

You recently shot for Ric Roman Waugh’s 'Kandahar' that also stars Gerard Butler. Can you share your experience of working on this film?

Kandahar is an adrenaline-heavy film. As the name suggests, it’s set in Afghanistan, so we recreated that in Saudi Arabia. Ric is known for his action and for making big movies such as Angel Has Fallen and Greenland. I am grateful to Ric because he allowed me to bring what I wanted to the table. There are so many languages being spoken in the movie - including English, Urdu, Pashto and Dari. I had to prepare for the action for the first 15-20 days as I had to do a lot of stunts on my own because of the way the shots were designed. I had not done this kind of action before and there were a lot of new things to learn and share notes with Gerard. He was a great partner to work with.

Your 'Death on The Nile' director and co-star Kenneth Branagh called you a ‘real details man’ in an interview. How was it working with him and the rest of the ensemble cast?

Kenneth is someone who leads by example. It is so weird that Richa and I were having dinner with him and discussing cinema, scripts and art, and 24 hours later, Belfast was nominated for seven Oscars! It’s surreal. Belfast is leading the way and it’s so well-deserved. It’s one of the best films we have seen this year and I am really gunning for him. I hope this is the year of Kenneth Branagh, not just for Death on the Nile but for so many reasons. I’m blessed I could share notes with him and with such a wonderfully diverse cast.

This movie, we hear, is a case of colour-blind casting. As an actor straddling Indian and international cinema, how significant is that for you?

While it should not be all-encompassing, it is a very integral part of cinema because stories are being watched all over the world. The world has gotten smaller, and there is a global audience for everything.

Superhero films that are franchises or whodunits like Agatha Christie have the whole world watching them. These are places where you can have colour-blind casting and be inclusive.

Casting is very specific to a project, so we cannot demand for that everywhere. But at the same time, we as Indians have a lot to say on the global platform as artists.

I know that Victoria and Abdul was one of the first leading parts for an Indian man and it opened many doors. It's really good to know that we can have projects tailor-made for us and be global. We have so many stories to tell.

One of the reasons why I’m not tempted to move my base from India to anywhere else is because I think there are great stories I want to tell here. We are going through such a major turmoil in the arts and other aspects, and we need those stories told more than ever before.

You are acting in Vishal Bhardwaj’s 'Khufiya' which also has stalwarts like Tabu and Ashish Vidyarthi. What can you tell us about the movie?

It’s a spy thriller based on true events, and it’s got Tabu written all over it! (laughs)

I am such a fan of hers, but then who isn’t?

I don’t think I could have asked for a better mix. For Vishalji, I would have even crossed a frame, but I think I got a big piece of the pie. We’re excited to resume work in a few days. 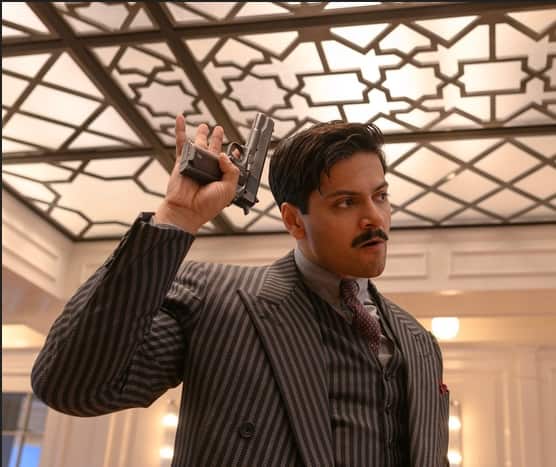 Ali Fazal in 'Death on the Nile'.

Your debut film as a producer 'Girls will be Girls' has received the Aide Aux Cinemas Du Monde grant from France. What does getting this grant mean to you, in terms of the content you want to produce in future?

There are only that many emotions in the human condition across the globe. Someone also said there are only six types of storylines across all continents. Here we are trying to tell stories that touch people globally and we have almost got a validation for that. This is a story which is as Indian as it gets. It's a relationship story, and we are going to shoot it in India. But at the script level, it already got recognized at the Berlinale Script Station and the Jerusalem Script Lab and got the prestigious grant which technically makes it an Indo-French production. We have distributors in France as well. The big task now is to get it in the can.

Lastly, do we get to see the third season of Mirzapur anytime soon?

I hope so. We got delayed because of the pandemic but we hope to start shooting soon so we can be out with it early next year.