Confused between the Derby and Oxfords? Not sure what a wingtip or Jodhpur boots are? A lowdown on every kind of style that a well-dressed man’s shoe wardrobe must include and how to care for them

There is a strict code of elegance and style when it comes to choosing a shoe that’s premium or luxurious.

When did a man’s shoe go from being functional to symbolising the love for good things in life?

That a man’s shoe has always been as much about style as function can be gauged from the design of what is considered the oldest shoe dug out by archaeologist Luther Cressman 70 years ago, in a quiet area of Central Oregon. Said to be over 10,000 years old, it was made of intricately weaved coir and sparked a book called 10,000 years of Shoes.

There is a strict code of elegance and style when it comes to choosing a shoe that’s premium or luxurious by the very nature of its design, the material used and the style. And we aren’t just talking about formal shoes here.

Take the example of platform sneakers, the hottest trend for young, or even young-at-heart, men. A simple one will cost upwards of Rs 10,000, and if you were to buy one from elevated basics master Rick Owens, you could pay up to $1,200 dosh. What styles should a shoe wardrobe necessarily include?

There are the formal square-shaped Derby shoes that most men own. But that is the basic variety. From formal to semi-formal and dress shoes, a man’s shoe wardrobe can be as extensive as any woman’s. Most men’s luxury shoes are categorised under the ‘Dress Shoes’ segment. Here are a few.

Oxfords: This isn’t the staid Derby despite the obvious resemblances. The difference between a classic oxford and the derby lies in its lacing. A derby has open lacing, in which the quarters or the side tabs in which the shoelace eyelets are punctured, are sewn on top of the vamp (the point where your shoe ends at the front of your foot). The oxford has closed lacing with the quarters stitched below the vamp and looks sleeker and more sophisticated. A spot of history: oxfords get their name from the eponymous city’s university students in England with whom they were the rage in the 1800s. The style has evolved to include several variations. The cap-toe features an extra piece of leather on the toe cap. The whole-cut has an uppercut made from a single piece of leather for a smooth and clean look. In traditional oxfords, the upper is made from different pieces of leather sewn together.

Brogues: These low-heeled shoes or boots are characterised by multiple-piece leather uppers decorated with broguing, a kind of ornamentation created by small perforations or serration along the edges. It is said that

these shoes were first been made in Ireland using pale hide. Once seen as a perfect country or outdoor footwear worn by Irish and Scottish men who worked extensively outdoors, they are now evening-out staples. The original brogues were rudimentary shoes made with untanned animal hide; the perforations allowed water to drain from the shoes. By the 1920s, men of leisure in American adapted brogues as essential wear, transforming them into a thing of fashion that has never gone out of style.

Wingtips: They are nothing but brogues with a pointed-toe cap that extends along both sides of the foot. The cap is shaped like the letter W, 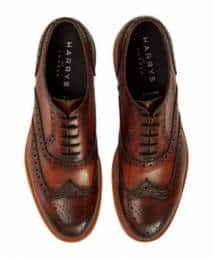 Wingtips are a type of brogues.

which is how it gets the name ‘wingtip’. Besides broguing along the edges, it has decorative broguing in the centre of the toe cap called the medallion. Wingtips in two contrasting colours are known as Spectator Shoes, with toe and heel cap and often the lacing in darker colour while the shoe body is normally white or off-white.

Monk Straps: Experts date this style back to 15th century Europe. As the name suggests, they were worn by monks leading an austere life. The monks had to protect their feet from the bitter cold, and the shoes were designed as a closed version of a sandal. While some men adopted the style in the 19th century, it was only in the 20th century that monk straps came into their own. Today, they are far removed from their austere version, having adapted an image of cool dress shoes.

Loafers: Many say it is a modern version of the moccasin. The loafer is a lace-less shoe that allows your ankles to be exposed since it does not wrap snugly around them. At the moment, loafers are enjoying a makeover with 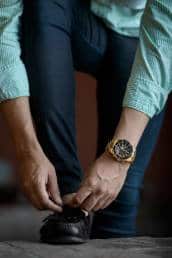 less clunky styles and vibrant colour treatments. The ones from Christian Louboutin represent casual luxury. Gucci’s Horsebit gilded loafers were first introduced in 1953 but have modern iterations. There are several styles of loafers. Penny Loafer was first presented by the British G.H. Bass shoe company in 1936. The design has unique strip leather with a diamond-shaped cut-out. The tassel loafers are famous with the Ivy Leaguers.

The Boat Shoe: After author Lisa Birnbach put it within the pages of her 1980 book The Official Preppy Handbook, which spent a whopping 38 weeks at the No 1 position in The New York Times Bestsellers List, the boat shoe came to be recognised as an essential part of preppy style. It was designed by seaman Paul Sperry in the 1930s. He took inspiration from his precocious pooch whose paw pads, with their cracks and grooves, provided a good grip even on the most slippery of surfaces. Sperry used a penknife to carve a herringbone pattern of slits into the rubber soles of a set of lace-less shoes. A British shoemaker adapted the design in 1935 on canvas. Now, you have both leather and canvas versions marked by low-cut, hand-sewn construction; soft, non-skid rubber soles; and laces that run through two eyelets on top of the shoes, as well as in and out of the sides. Chukka boots: The name ‘Chukka’ is derived from the game of Polo. “Polo players often prefer to stroll around in Chukka boots after a game rather than in their polo boots,” says designer Raghavendra Rathore, who comes from the Jodhpur royal lineage, known for their superlative polo team. Chukka boots have gone beyond the polo fields. One of the best-known lovers of the boots is shoe designer Steve Madden. A Chukka boot is essentially lace-up ankle boots, with two or three lacing eyelets, rounded toe box and thin soles.

Jodhpur Boots: The ankle boots feature a buckle around the ankle, using which you can tighten or loosen the shoe as much as you need, a perfect blend of function and style. Before Jodhpur boots, polo players wore boots that reached their knee. In the 1920s, shoe craftsmen in Jodhpur crafted the modern version for polo players who came from the Jodhpur royal family and the rest is history.

What are the most popular materials for luxury shoes?

How should I care for my shoes? Get a good shoe wax.

shoes whenever you feel the leather is getting dry.

Are there any rules to be followed while pairing your shoes with what you wear?

Modern fashion follows very few rules. So while Owen says elevated sneakers work best with a sporty outfit with a fresh and modern vibe, an amazing platform sneaker would look as good with denim and a blazer or one of the new-age contemporary bandhgalas that Indian designers for men regularly put out. An oxford, with its elongated toes, looks best with slim-fitting trousers or the trendier trousers with turn-up cuffs.

There are two versions of the monk strap shoes: the understated single monk strap works perfectly in a formal, business environment, while the edgier double-strapped can be worn anywhere, from parties to weddings. The Jodhpur and Chukka boots are versatile and can go from a day spent outdoors to an evening party.

What are the most expensive dress shoes in the world?

Tom Ford customised by Jason Arasheben: With a price tag of $2 million, these have to be the most expensive pair of shoes in the world. The all-diamond shoes by designer Tom Ford were custom-designed by jewellery designer Jason Arasheben using 14,000 full-cut white diamonds, delicately set in white gold.

Louis Vuitton’s Manhattan Richelieu men’s shoes: At $10,000, they are one of the most expensive. And you can order them online anywhere in the world. The waxed leather, along with complex stitch patterns and perforated motifs, makes them a design classic.

Aubercy Diamond Shoes: These limited edition shoes have a jaw-dropping price of $4500. The classic leather pair sparkle with diamonds hand-sewn into the leather.

Christian Louboutin's gold-spiked loafers have acquired cult status. But it is Berluti that has set the bar high for men’s designer luxury shoes. The Italian house is known for using perfectly imperfect swathes of leather with unique colours and patinas.

Raghavendra Rathore: In India, Rathore is among the best-known bespoke shoemakers. He has rejuvenated an age-old tradition of bespoke accessories that dates back to the 1920s when the aristocratic and business families followed the trend of customized handmade shoes that could be matched with their bespoke wardrobe.

Nawab Sikander Jah’s vintage shoes: Now, this isn’t a pair that you will ever wear. But they are on this list just for your vicarious pleasure. The shoes, now the property of a Toronto museum, once belonged to 18th century Nizam of Hyderabad. Embroidered in gold thread, it features rubies, emeralds and diamonds.

Deepali Nandwani is a journalist who keeps a close watch on the world of luxury.
TAGS: #Desire for Dummies #Men's fashion #weekend reads
first published: Apr 4, 2021 11:54 am