A new narco-state is blossoming in Afghanistan under the Taliban

In 2020, the area under opium cultivation expanded to 224,000 hectares from 163,000 hectares - overwhelmingly in areas under Taliban control.

A 2011 photo of an International Security Force Assistance marine greeting children at a farmland in Helmand province, Afghanistan. Ironically, the war in Afghanistan had weakened irrigation and other systems that supported the opium trade. (Photo: US Marines via ISAFmedia via Wikimedia Commons)

“A ma’jun party never goes well with araq and chaghir,” Zahiruddin Muhammad Babur ruefully observed after a dissolute evening in 1519CE. Weeks earlier, the emperor’s armies had raised a tower of skulls in Bajaur, massacring 3,000 people “at enmity with the people of Islam, by reason of the heathenish and hostile customs prevailing in their midst”. Then, on the march home to Kabul, he gathered his friends, serving them liquors, wines and ma’jun, balls made from sugar, ghee and opium.

“Try as we did to keep things straight, nothing went well; there was much disgusting uproar; the party became intolerable and was broken up”. 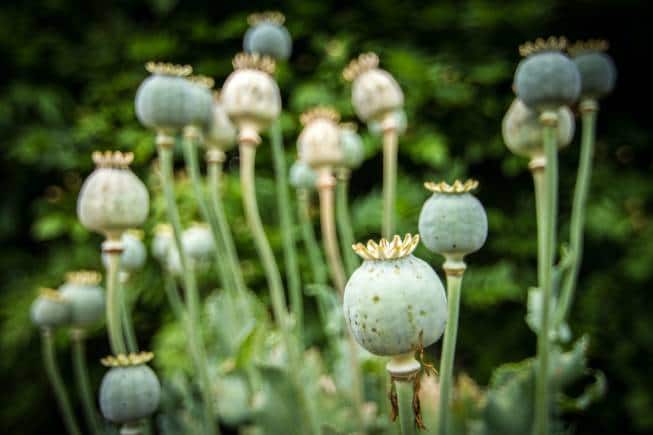 Poppy plants from which opium is extracted.

Five centuries on, as the Taliban sweeps across Afghanistan, the drug of kings is almost certain to become among the pillars of the resurrected Islamic Emirate. In 2018, the United Nations Office on Drugs and Crime estimated that the country’s “opiate economy is worth between 6 and 11 percent of Afghanistan’s GDP and it exceeded the value of the country’s officially recorded licit exports of goods and services.”

Even though drought has led to reductions in production since 2018, and global opiate prices are highly variable—from an estimated peak of US$6.6 billion in 2017, revenues fell to below $2.2 billion in 2018—the narcotics business has become the real backbone of the Afghan economy. From 2008 on, the Taliban earned over half its revenues from narcotics, organising cultivation, protecting harvests, and securing criminal supply routes into central Asia. Now, it will have the opportunity to use its expanded power to truly grow the business.

Also watch: Why US exit from Afghanistan is bad news for Pakistan

The story of Afghan opium is enmeshed with geopolitics. From at least the sixteenth century, commercial production of opium was widespread through Persia, Turkey and India. The market, however, was regional; it moreover served medicinal needs, as well as a small, élite consumer base.

Eighteenth century British imports of commodities like porcelain and tea—absent any significant exports—led to significant trade imbalances, estimated by economic historians at an average of 5% each year. Britain saw opium as a means to address this deficit.

In 1773, thus, opium became a monopoly of the East India Company, with production centres in what are now Bihar and Uttar Pradesh feeding the market in China.  In 1775, British merchants exported some 75 tonnes of opium to China; by 1850, it was nearly 3,200 tonnes. Even though China, aware of the catastrophic social impact of addiction, banned opium several times, British military campaigns in 1839 and 1858 secured the right to continue selling it.

As historian Carl Trocki has pointed out, opium was “a source of virtually free capital which allowed the English to get their foot into the door of the Asian commercial system”. Late in the nineteenth century, though, an international drug control regime began to spring up—spearheaded, among others, by American missionaries active in East Asia.  Imperial British authorities were compelled to cut back production in India.

From the mid-1920s, Imperial Britain tried—in the main, ineffectually—to stamp out smuggling from Afghanistan. In the end, the world made its peace with Afghan production, even making extensive official purchases in the war of 1939-45, as demand for opioid-based anaesthetics exploded.

Explosive surges in opium production took place in the 1980s, as the Islamist mujahideen groups that fought the Soviet Union looked for means to fund the  insurgency.

Gretchen Peters, author of an authoritative work on the Taliban’s narcotics operations, has described how insurgent commander Mullah Muhammad Nasim Akhundzada “set production quotas, implemented a predatory loan service to small poppy farmers”, and “reportedly threatened farmers who failed to plant poppy with castration or death”. “We must grow and sell opium to fight our holy war,” one mujahideen leader interviewed by The New York Times said in 1986.

The Inter-Services Intelligence Directorate—which managed American and Saudi financial support for the jihad—helped the drug trade along.  The smuggling routes used to bring in weapons, medicine and food took back opium. The drugs were shipped to Europe and the United States through criminal cartels in Karachi, who in turn laundered their finance through the stock exchange and the property markets.

War, interestingly, played its own role in creating an ecology for drugs. Afghanistan’s ancient karez irrigation system—a system of hand-dug tunnels that tapped groundwater—were bombed-out in the course of years of conflict. The social cohesion needed to maintain the system, moreover, disintegrated under the impact of war. In many cases, warlords took control of the system, and began demanding payments for irrigation water.  Although farmers themselves made no great profits from poppy, the crop was hardy, drought-resistant and had a ready market.

In 1997, the Taliban came to power, promising to crush opium. Afghans, a statement issued that year warned, are “reminded once again that they should strictly refrain from growing, using, and trading in hashish and heroin. Anyone who violates this order shall be meted out a punishment in line with the lofty Mohammad and Sharia law.”

For India, this will have several consequences. Islamist terror groups targeting the country will likely have access to new sources of funding.

The reality was at some distance from this promise. In 1996, Afghanistan had produced 2,250 metric tonnes of opium. That number soared in 1999 to 4,580 metric tonnes. The Islamic Emirate controlled most of the country by 1999; 97% of the country’s produce is estimated to have been grown in Taliban-held areas. Local commanders were charged with collecting a 10% tithe on all revenues, using the funds to expand their campaigns to seize and control territory.

From 2000, though, the Taliban moved to end drug cultivation, hoping to secure an end to sanctions and enhanced international aid. In one of the most remarkable reversals of narcotics production globally, cultivation fell from 82,000 hectares to 8,000 hectares.

Experts remain divided on whether the Taliban’s move was, in fact, a good-faith move against narcotics. Peters, among others, has noted that the Taliban continued to hold on to opium stockpiles, and used the production cut to raise prices. The regional price of a kilo of opium, according to Drug Enforcement Agency records, rose to a record high of $746 on the eve of the 9/11 attacks, falling inside weeks to $95 a kilo, suggesting that owners were dumping stockpiles in anticipation of the United States-led invasion.

Little real progress was made in rolling back the renaissance in drug production which took place after the invasion: cultivation had surged back to 72,000 hectares by 2002. In many cases, warlords with whom the United States cooperated were themselves complicit in the narcotics trade. Fitful counter-narcotics efforts were made, but often served only to alienate rural communities dependent on the income.

From 2006, as the Taliban reemerged from their sanctuaries in Pakistan, narcotics became an increasingly significant source of revenue.  In 2007, when the jihadist organisation briefly seized control of the town of Musa Qala, it is reported to have imposed an $8 monthly tax on opium-growing families. In subsequent years, the Taliban institutionalised these operations, imposing cesses on opium-transporting trucks, processing laboratories, and cartel convoys headed into central Asia or Pakistan.

Even though efforts were made to stamp out this resurgence, it had little impact. Aerial spraying operations, as experts familiar with similar campaigns in Colombia and Peru had predicted, had almost no impact. Neither did operations by military forces. US President Barack Obama’s administration concluded that the drugs were just part of a wider mosaic of illegitimate activity corroding the Afghan state, and focused instead on attempting—also unsuccessfully—to eradicate corruption instead.

Fitful efforts to take on the Taliban drug trade continued into 2018. The efforts of this campaign, spearheaded by air power, were less than roseate. A scholarly study of one operation, carried out by London School of Economics scholar David Mansfied, concluded that it had almost no impact. The likely loss to the Taliban was $190,750, if calculated as the street value of processed heroin, and just $2,863 as tax. The flying cost, per hour, of a single F22 bomber, by contrast, was $70,000.

As the Taliban seek to expand their authority in Afghanistan, and stamp out the small remnants of resistance which remain, narcotics revenues will without doubt be an important tool in their arsenal. In 2020, the area under opium cultivation had expanded to 224,000 hectares from 163,000 hectares, overwhelmingly in areas under Taliban control. The dramatic expansion in the Taliban’s territorial control is likely to see further institutionalisation of these operations, as the Emirate seeks to contain the likely cutbacks in foreign aid and trade.

For India, this will have several consequences. Islamist terror groups targeting the country—from groups like the Lashkar-e-Taiba to the Islamic State—will likely have access to new sources of funding, outside the gaze of institutions like the Financial Action Task Force. Flows of narcotics into India, moreover, may increase, as cartels seek new markets fed by growing acreage.