Webinar :Join an expert panel for a webinar on Smart investments for a secure retirement January 28, 2021. Register now!
you are here: HomeNewsTrends

Book Excerpts: 'Quarantined' explores love in the time of corona

‘Quarantined’, an anthology of six love stories by columnist and author Mahul Brahma, tells tales of unconventional and dark love, exploring the depths to which our minds take us in unfamiliar times with unfamiliar people.

Business travel, mostly to Switzerland, his head office, was an integral part of his job. So he has to travel for a greater part of the year. He loved golf and used the course extensively to close deals. At all times, wins and only wins kept him going. He thought like a lion. The lion will only think of getting its kill, it never thinks of survival like the other animals, it is never afraid. It only thinks of its prey, its win. This killer instinct has been paying rich dividends.

He is a father of two, happily married. His wife manages the children, 10 and 14 years old, and the household. She also is associated with an NGO. 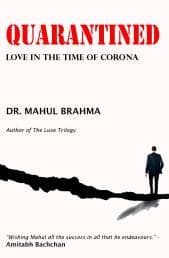 Naresh, due to his busy schedule, even when in town, finds it very difficult to make time for family. He has it planned. When he becomes the MD, he will take a month-long holiday with his family and visit his parents, who live in their ancestral home in a village in Kerala. This is the house where he grew up, spent his childhood. The ‘mandatory’ foreign holidays every year, end up being business trips with some meeting or the other lined up, and the rest of the time consumed by his office work via his phone or laptop.

The lockdown was not yet announced and the coronavirus was gaining ground more so in his headquarters. His HO mandated work from home, given that it was the need of the hour. Now for Naresh, even the days he was in town, his work never ended before 9 in the night. With the ever-crowded roads and Mumbai traffic, commuting took 2 hours. So he would typically reach home at 11 pm. Tired and with the baggage of some residual work for the next day.

He was aware his family time was compromised and so his promotion and then subsequently the Kerala plan have become so critical. But unfortunately, for the promotion he will need to give more and more time and attention to work. But he is a master manager and was sure he will manage this catch 22 situation too.

Radhika, his wife, knew his husband well. Their love was strong enough to endure these tricky situations. Naresh loved his wife and his boys. It’s just the time that was not enough to spend with them.

There was, however, a small caveat - a very closely guarded secret. Naresh was having an affair with a colleague named Rhea for over a year. Rhea lived alone in an apartment near the office. It was Naresh’s gift to her and a very convenient love nest. In the afternoons, both of them sneak out, separately, to meet at her apartment. Both worked till late hours so Naresh spends some of the nights at her apartment.

While the office colleagues were aware something is brewing, they didn’t have any concrete proof barring one out of turn promotion for Rhea and her occasional trips with Naresh to Switzerland office. 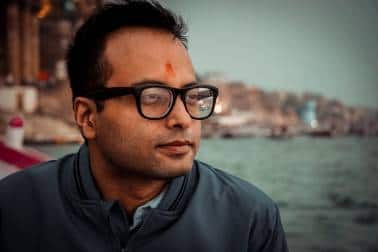 Radhika dutifully stood by Naresh during good and bad times.  And Naresh loved her. But somehow Naresh found his office and Rhea’s apartment much more relaxing and comforting than his home. Radhika only talks about the kids and their studies and their future. There is no lone time. And Radhika has no clue of office or the politics thereof so he can’t even discuss his most-beloved topic with her. The love is there, it is just a distance that seems increasing between the two. That’s why the Kerala trip has become very important.

Due to the increased intensity of the coronavirus Naresh decided to cut short the trip to headquarters and decided to return two days ahead of schedule. He was tested and there was no sign of any fever and thus he was let go, thanks to a friend at the airport. He narrowly escaped the quarantine. His friend, however, said, it will be better if you home quarantine yourself for two weeks and keep safe distance from Radhika and the boys. Naresh loved his family and dutifully agreed to do so.

When he came home in the evening Radhika was not there. He spoke to the children and they were happy to see him but he asked them to maintain a safe distance. He was happy to see but was worried where Radhika is. Their house help said as Radhika’s father is not keeping well she has gone to stay with him for two-three days.

Naresh was not aware of it. He felt bad that Radhika didn’t share this information with him. Anyway, no worries. It was way past midnight so he thought he will speak to Radhika about his father-in-law the next day. He will be in home quarantine so Radhika can spend a few more days with her parents. Quarantined for two weeks is a tough task but thanks to his laptop and mobile he will be able to stay connected with his team and with HO. Anyway, he has already instructed his colleagues to work from home. He was missing Rhea, he hasn’t seen her for over a week now.

And it was lockdown. Naresh could not reach Radhika, her cell was out of reach. Strangely enough, even Rhea’s cell was switched off. He was worried but work soon consumed that worry.

A day later when it was the day of his scheduled return, Naresh got a call from Radhika. She just said hi and went silent. Naresh sense she is upset. He presumed that his father-in-law’s health must have deteriorated.

After a few minutes of assumptions and presumptions filling the silence, Radhika spoke: “Naresh, I have been admitted to the state hospital. They have found initial symptoms of coronavirus so they are conducting a test for that.”

“Oh my God. Just tell me which hospital? Is it the government hospital near your father’s place? I will be there in no time R, just hang in there. I am sure it is nothing and just fever. There is a lockdown but this is an emergency so I will somehow make some arrangement and be there for you. Even I am at home quarantine for the past two days.”

Radhika said, “I am not in Mumbai. I am in Goa. And I was scanned and quarantined by the airport authorities in Goa.”

“What? What are you doing in Goa? Don’t you know there is a lockdown? Now how can I even come? Who will look after you? How can you be so irresponsible?” Naresh was shouting now in frustration.

Radhika continued, “I am here with Rajneesh. We are in love with each other. He had fever and I must have caught it from him. He is also admitted here. We both are quarantined. The test results will come in three days.”

After a long pause, she continued like her usual strong self. “I have been meaning to tell you this for a long time. But you have no time. For the last one year you have been avoiding home like a virus. I know about Rhea. I know where you have been spending the nights.”

Naresh was so shocked he could not speak. He has had such moments very rarely.

Radhika continued after a brief pause so that Naresh can get a grip of the situation. “And when I will be back from this quarantine, rather if I am back, we will talk it out like adults. Take care of yourself and the boys till then.”

Mahul Brahma is author of The Luxe Trilogy, which includes Luxe Inferno, Dark Luxe and Decoding Luxe. He is an award-winning CSR, Communications and Brand head with a Tata group company. The above excerpts have been published with the permission of the author.