UPCOMING EVENT:Know how Global Investing can be spread beyond the US markets by joining an engaging webinar on November 30, 11:30 a.m.
you are here: HomeNewsTechnology

Samsung Galaxy Z Fold2 Review: A week with the best foldable smartphone of 2020

If you are a tech enthusiast or even follow technology, in general, you must have heard the words “Smartphone innovation has peaked”. We have been seeing companies launch smartphones worth Rs 1 lakh in India with top-of-the-line specifications packed inside a glass and metal sandwich design. Just when smartphones got boring, Samsung made it interesting last year with the Galaxy Fold - a smartphone that came with a foldable screen.

What looked like a marvel in the smartphone space soon turned into a chapter that Samsung wanted us to forget. The original Galaxy Fold was plagued with several issues around the display and the hinge below it. Screen blacking out, green lines, dust under the display due to the gap in the hinge were the primary issues that were reported.

Acknowledging the issues, Samsung relaunched the Galaxy Fold with minor tweaks and enhancements that made it more durable for the real world. Although Samsung said these tweaks made the Fold resistant and practical, it may not have convinced many with its durability.

Jump to 2020 and there’s the Galaxy Z Fold2. The new generation of the foldable smartphone comes with a bunch of new changes, including a bigger, better cover display, and what the company claimed as a more durable folding screen. Galaxy Z Fold2 also packs the latest top-of-the-line hardware found in 2020 smartphones.

A big draw for the Samsung Galaxy Z Fold2 is the display. With a large cover display and an even bigger screen on the inside, the Galaxy Z Fold2 does the job of both, a smartphone and a tablet. The large 7.6-inch Dynamic AMOLED screen is colour accurate and more than bright for day-to-day use and you would appreciate its quality while consuming content. What complements the media consumption is the loud and clear dual stereo-speaker setup.

The notch is also gone, making some more room for content on the screen. In case you want to use the Fold2’s inner display as a mirror for those touchups, Samsung has incorporated a 10MP camera inside a hole-punch cutout on the folding screen. What’s even better is the 120Hz refresh rate support. Two things though - the crease is visible and the screen is prone to fingerprint smudges. 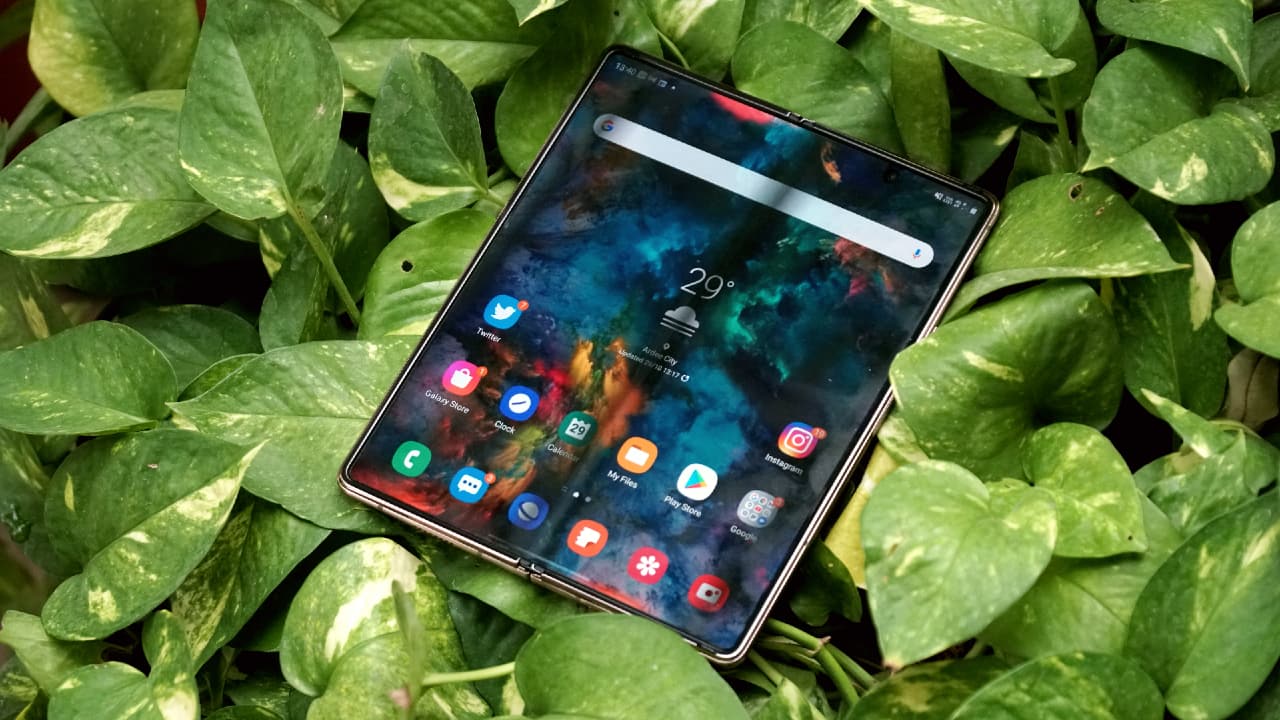 The outer Super AMOLED display is now bigger. Samsung has pushed the top and bottom bezels to the edges of the Galaxy Z Fold2, offering a 6.2-inch cover screen. Although the tall screen with a narrow aspect ratio is quite comfortable to use, apps like Instagram had scaling issues, forcing me to unfold the Fold2 and use the bigger screen. (More of this later in the review).

To answer any of your Galaxy Z Fold2 durability concerns - Yes, you need to be careful while using the foldable screen. That’s not just me but even Samsung as the Galaxy Fold2 reminds you twice (unboxing and while setting up) to not press very hard on the screen.

Keeping these instructions in mind, I continued my typical tweeting and scrolling. The only times when I was careful with the inner display was while folding the device. You should not even go the JerryRigEverything way and scratch test the foldable screen with keys or any kind of debris.

Even while playing games like Call of Duty, I was initially concerned that the screen might get damaged if I apply too much pressure. However, that wasn’t the case. I played the game as I play on a regular smartphone. With the performance unit packing a Qualcomm Snapdragon 865+ processor, 12GB RAM and 256GB storage, you are bound to get a smooth experience. Couple that with a 4,500 mAh battery, and you get all-day battery life.

Samsung claims to have worked on the hinges and launched the Galaxy Z Fold2 with a ‘hideaway hinge’ that features sweeper fibres to provide better durability and dust resistance. It employs a CAM mechanism which allows the Galaxy Z Fold2 to stand on its own from 75 to 115 degrees. This hideaway hinge features modified fiber composition, and adjusted fiber density. 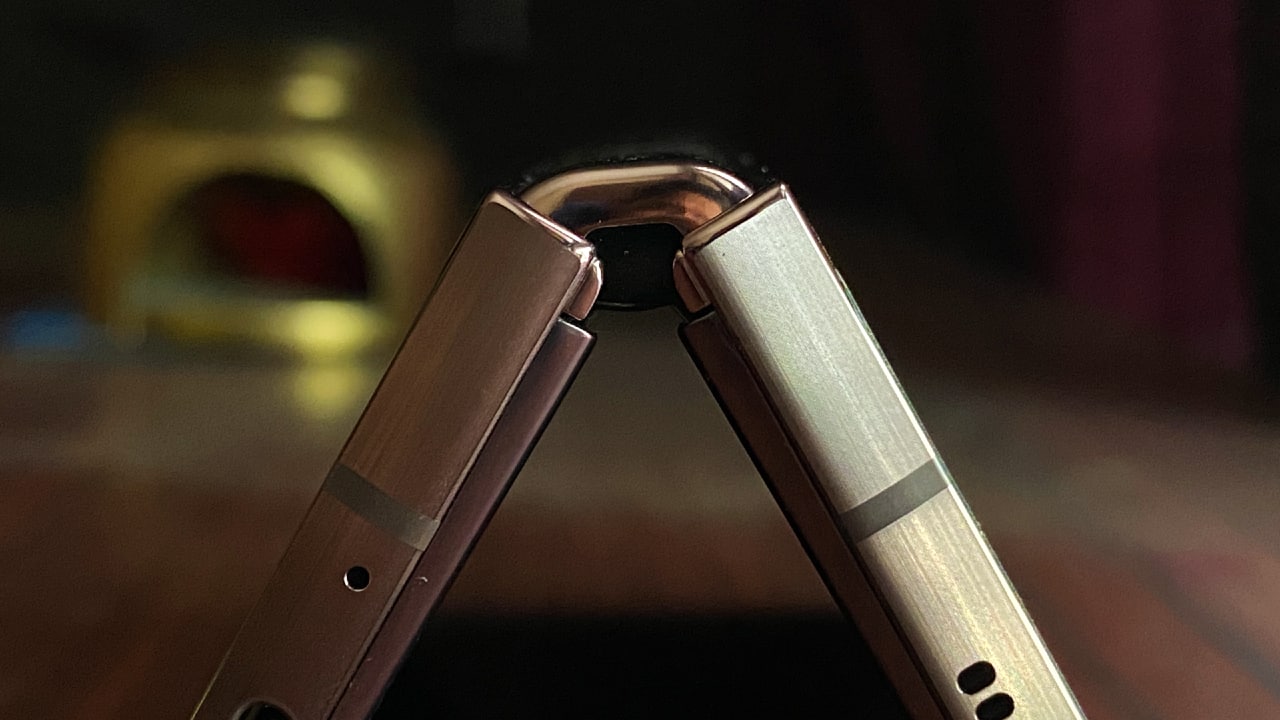 This is an improvement on the feature which was first introduced on the Galaxy Z Flip, within the gap between the body and hinge housing to repel dust and undesirable particles. The new sweeper technology can achieve the same level of protection in a smaller space.

The back is quite similar to the Galaxy Note 20 Ultra (Review). Our Samsung Galaxy Z Fold2 review unit came in a Mystic Brown colour that sports the same rectangular design housing the three camera sensors. There is no 108MP sensor or 100x space zoom. Instead, you get three 12MP camera sensors that shoot good-quality images. 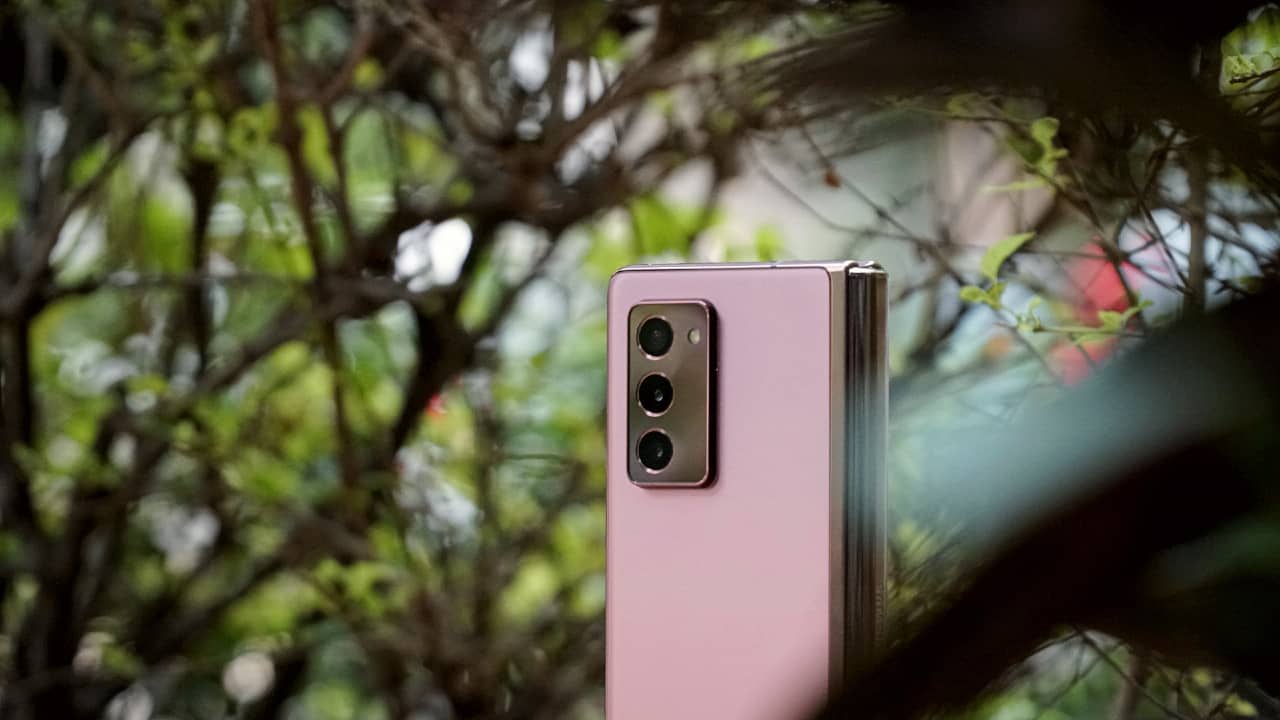 The primary camera offers the best results with sharp, detailed, and colour-accurate images. To my surprise, there wasn’t any over-saturation of colours in the photos that I took on the Galaxy Z Fold2, and they were very close to the real-life colours. The 12MP ultrawide too offers good colours but not as good details and contrast as the main camera, which will be noticeable on the bigger screen. Night mode, too, is fine but not the best. It does reduce noise and also manages to get good details in shadows without overblowing the highlights.

Although the 10MP sensors shoot detailed selfies, I would unfold the Fold2 and use the cover screen as a viewfinder to click selfies using the 12MP main camera at the back. Click on the photos below to check the Galaxy Z Fold2 camera performance. 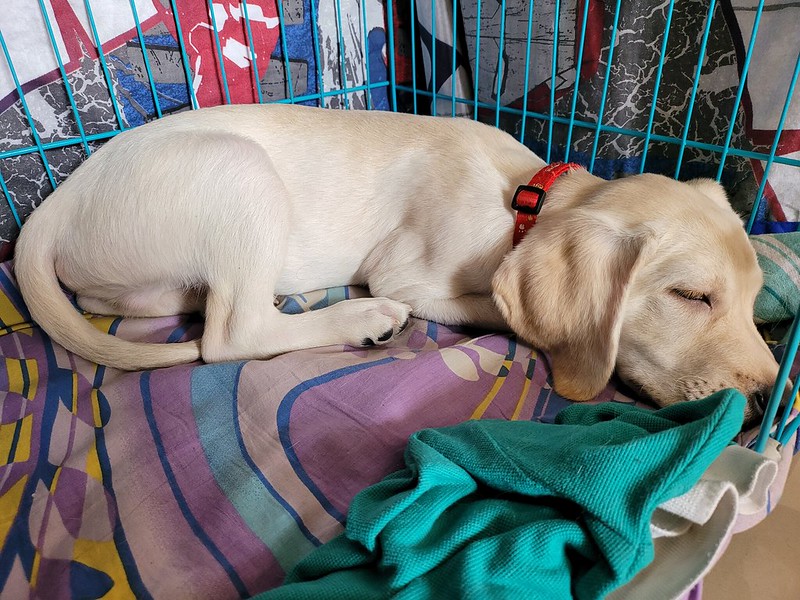 The native camera app has been optimised well to make use of the big screen. Fold the device into half (what Samsung calls the Flex mode) and the left side of the screen shows the most-recent image, whereas the right-side acts as a viewfinder. It also works best when you want to click timer-based selfie shots, with half of the screen acting as a tripod.

Not just the camera app, but even stock Samsung apps have been optimised to take the advantage of the bigger screen. Flex mode activates the keyboard in the Notes app and you can use the Fold2 just like you are typing on a laptop.

However, the problem starts when you use other apps.

Like many enthusiasts out there, I too was curious to see how the display and the hinge-mechanism on the Galaxy Z Fold2 worked. However, once I got over the “Wow! The screen folds” phase and started using the foldable phone as a regular device, I noticed the shortcomings. The most fascinating feature is also perhaps one of the most concerning elements of the Galaxy Z Fold2 - the display.

You see, the display, although much better and durable than the predecessor, is a bit fragile and can attract scratches when exposed to the outer world. The Fold2’s display attracted many fingerprints, and while I did try to clean it using a microfibre cloth, there were stain marks on the screen. I also thought of using the Fold2 as my primary device, but then held back after realising how thick the device is when it's folded. 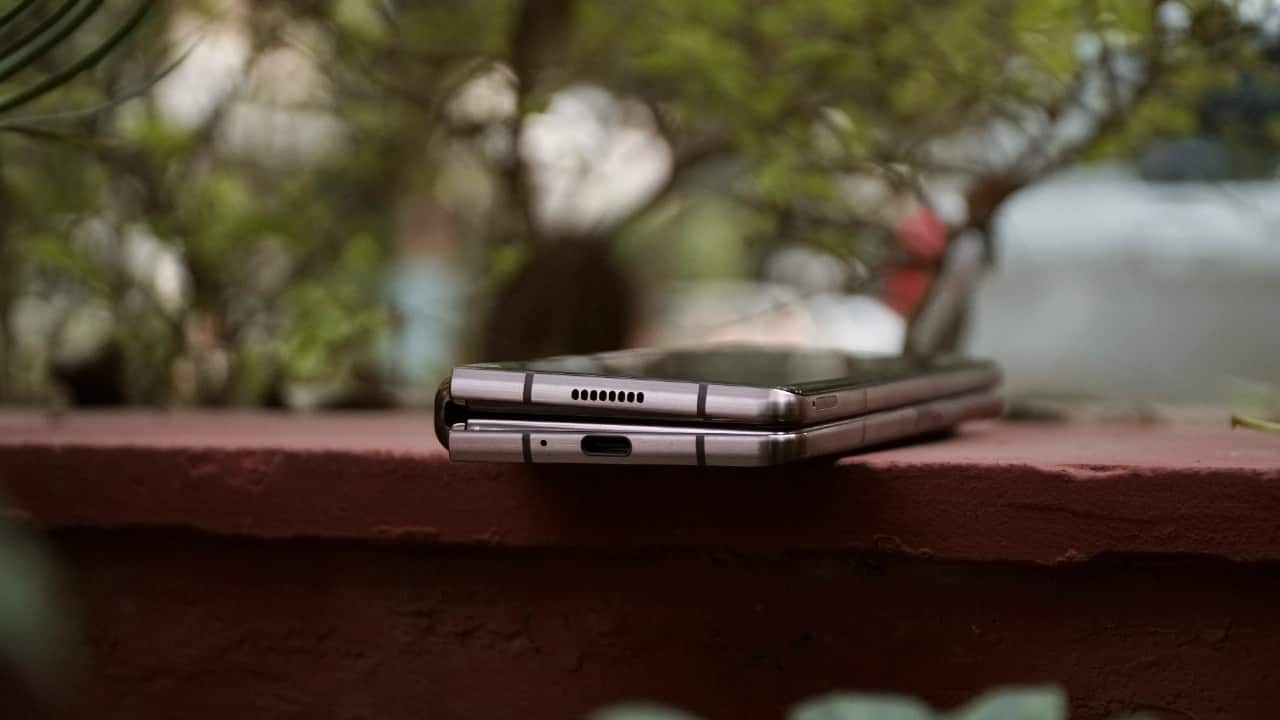 It's not as uncomfortable as it may seem but then I am someone who prefers not-so-heavy-and-thick devices. If you are okay with that, this point can be ignored.

Lastly, app optimisation. Although Samsung apps have been well optimised for the Fold2, third-party apps fail to make use of the screen space. Apps like Instagram, Hotstar, Netflix, etc show those ugly, thick black bars at the top and bottom that do not aid in offering an immersive viewing experience. 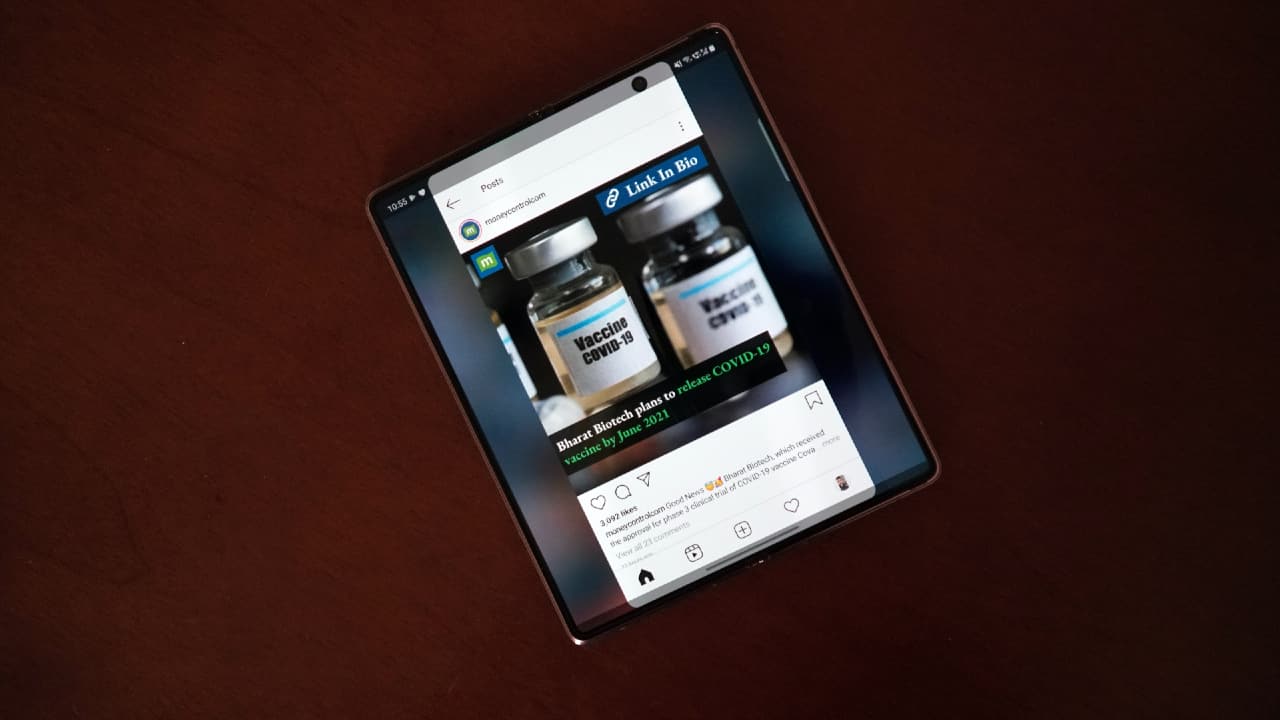 This is bound to happen as most videos around the world are optimised for the standard 16:9 aspect ratio. Apps like Instagram also cut the text when I was scrolling on the cover screen.

Do these issues suggest that one should skip the Galaxy Z Fold2? The answer depends on your use case. If you are someone who consumes a lot of content and also wants a big screen as an alternative to your tablet, the Galaxy Z Fold2 is a perfect replacement.

Although there are a few minor shortcomings, Samsung has already set a high standard when it comes to the future of smartphones. Tech Pundits often say foldable phones are the future, and only time will tell if this is true. With phones like the Moto Razr, LG Wing, and even Samsung’s own Z Flip and Fold2, we have a teaser in front of us that showcases what the future of smartphone tech holds.

However, in 2020, Galaxy Z Fold2 is a growing baby. Compare it to the original Galaxy Fold, and you will see how much of a big stride has Samsung taken with the Galaxy Z Fold2 in a year's time. If things go well, the foldable tech will certainly mature and we could one day use foldable smartphones without any durability concerns.

For now, I would wait and watch Samsung and other brands challenge themselves further and evolve the foldable tech. As for the ones who want a foldable smartphone in 2020, the Galaxy Z Fold2 is the best possible device that you could get. Samsung Galaxy Z Fold2 offers the best of both worlds - the use case of a regular smartphone and the convenience of a larger screen estate of a tablet in one device.