Dell Latitude 7400 2-in-1 review: One of the best business laptops you can buy, but it doesn't come cheap

The Latitude 7400 takes productivity to new levels with over 14 hours of battery life in a full charge.

Dell sent us the new Latitude 7400 for a review. Before we get into more details, the variant that we received and under review is the top-end model with an Intel Core i7-8665U, 16GB of RAM and a 256GB PCIe SSD.

The Latitude 7400 is purely a business-oriented machine, and Dell has integrated a bunch of nifty features to make life on-the-go easier and secure.

While all these innovative features and high-end hardware don’t come cheap, there’s more to this 2-in-1 laptop than what meets the eye. Let's analyse at this new machine:

Considering this is a business-friendly laptop, performance is more than up to the mark. From multitasking to casual gaming, the Latitude gets the job done pretty effectively. The Latitude 7400 we received was equipped with an Intel Core i7-8665U processor with Intel vPro technology. One of the primary reasons Dell has chosen this processor is because it supports vPro technology that allows management solutions to mitigate risks and threats from malware on a processor level.

The quad-core processor is accompanied by 16GB of DDR3 RAM along with a fast 256GB PCIe SSD. Dell’s reasoning behind opting for DDR3 RAM over DDR4 is to help improve battery life at a very slight cost of performance. The Latitude scored 5,289 in the single-core and 16,293 in the multi-core Geekbench 4 tests. 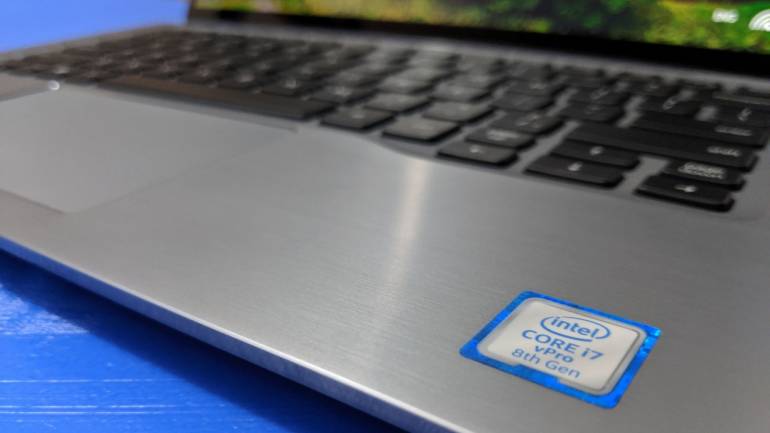 The one thing we’d have really liked to see on the Latitude is a dedicated graphics card. Instead, you get an integrated UHD 620 graphics courtesy of Intel. You can run some older titles on this laptop by dropping the settings.

Both Counter-Strike: Global Offensive and Heroes of the Storm were playable on medium settings. However, you can connect an external GPU using one of the two Thunderbolt ports.

The Latitude also does well in terms of thermals. The question of throttling doesn’t really arise when doing regular tasks, while temperature rarely rises above 25 degrees Celsius. Putting the 7400 under maximum load will make those fans on the bottom keep in, but they aren’t really loud and can be easily drowned out by the sound from the speakers. We thought the Latitude passes the performance test with flying colours.

When it comes to the screen, Dell has opted for a 14-inch FHD (1920 x 1080) resolution IPS Touch panel. The Latitude 7400 features a 16:9 aspect ratio, excellent for Netflix and YouTube. The 7400 covers the colour gamut fairly well – 94 percent sRGB and 70 percent AdobeRGB, which will get the job done for creative professionals who use Photoshop and Lightroom. 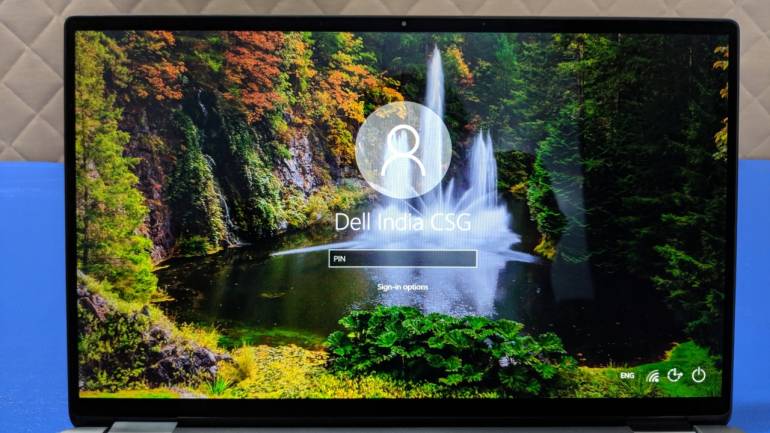 Latitude 7400 features a peak brightness of 278 nits, which is a bit of a letdown as several notebooks in this category easily surpass the 300 nits brightness range.

However, Dell claims that the Latitude was engineered for business professionals who spend most of their time indoors, and in those conditions, the Latitude fares quite well. We did face some issues with reflections, but it was rather mild and only while using the device outdoors.

Dell has also incorporated a 14-inch display into a 13-inch chassis on the Latitude 7400. The screen on this 2-in-1 notebook features four slim edges on either side as well as a drop hinge to open the laptop with minimal effort.

This 10-point multitouch screen has a glossy panel with Gorilla Glass 5. The two downward-firing speakers on the bottom of the chassis were relatively loud with surprisingly no distortion. In a quiet room, the speakers should be effective, but we’d recommend you keep a pair of headphones around.

The Latitude 7400 is a slim and relatively lightweight notebook. This is an extremely portable laptop, and if you’re an on-the-go business professional, the Latitude 7400 perfectly fits the bill. Dell uses a brushed aluminium finish on the Latitude 7400. The notebook’s all-metal unibody design just looks and feels premium. The Latitude’s dual-hinge design ensures the bezel on the chin is as slim as those on either of the sides. 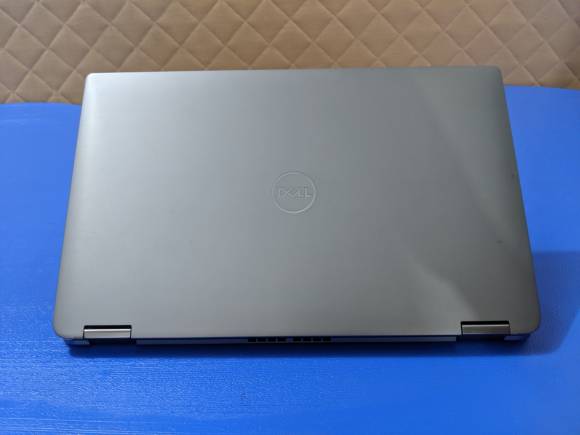 The brushed design is used across most of the surfaces, while the hinge receives a glossier finish. The new Latitude also gets diamond-cut edges and a “Dell” logo on the top. Dell has even opted for a sunken keyboard on the Latitude, allowing you to place the notebook on a surface while using it in tablet mode without worrying about key presses. 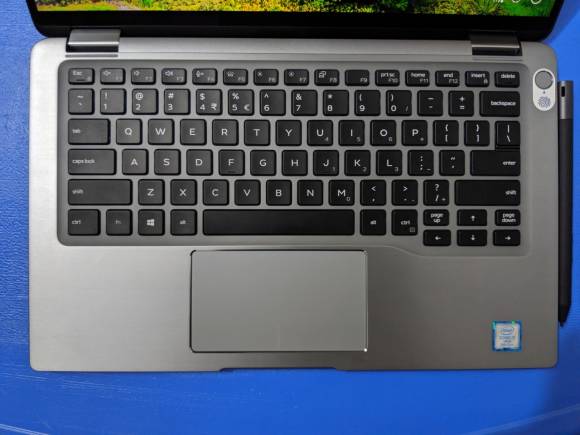 Speaking of the keyboard, the Latitude 7400 is equipped with a tenkeyless keyboard, which is comfortable over long stretches. The keyboard features LED backlighting, excellent while working in a dark room or dim environment. Additionally, we really liked the 1.3mm key travel distance that provides a tactile feel while typing. The glass touchpad on the Latitude is quite smooth and features Microsoft Precision drivers. The touchpad also offers flawless support for Windows 10’s multitouch gestures.

One of the great things about the Latitude 7400 is that it can be used in different modes. 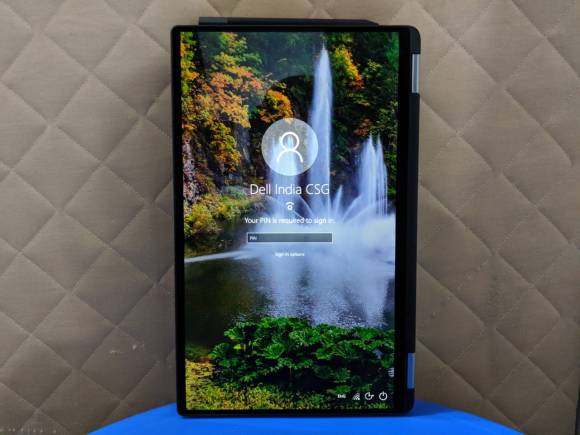 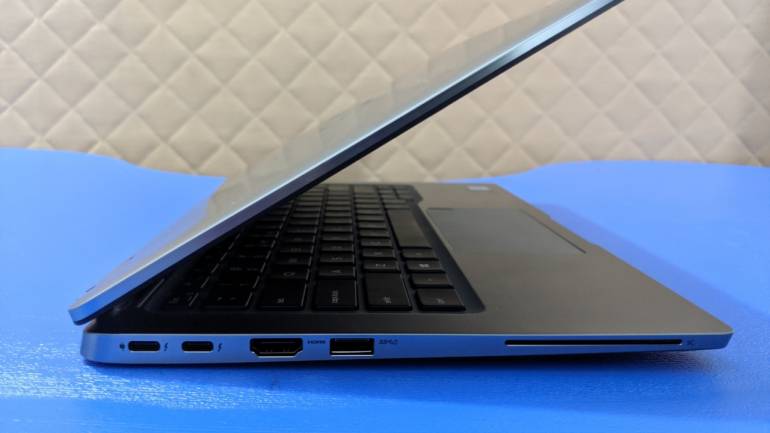 The assortment of ports on the Latitude 7400 is good. Dell has incorporated a Kensington lock slot, a USB Type-A, a headphone jack, MicroSD card slot and a SIM tray on the right side.

On the left, you get two USB Type-C Thunderbolt 3 ports, an HDMI port and another USB Type-A port. Our unit also came with a smart card reader, but this is an optional port. In terms of I/O, we’d have to give the new Latitude a 10/10.

The Dell Latitude is one of the few laptops on the market that fit a 78Wh battery in a 13-inch chassis. While you can get the Latitude 7400 in a 58Wh battery configuration, Dell claims the 78Wh battery can last up to 26 hours on a single full charge.

But manufacturers often make inflated battery life claims by running specific tests in controlled conditions. However, the Latitude’s battery life is pretty impressive, making it the standout feature on this notebook.

We went through a nine-hour workday and ran the machine for four more hours the next day before heading for the charger. This is definitely a one and a half workday laptop; we’re talking up to 15 hours of battery life on a single charge if you’re multitasking over MS Office and a web browser. I even powered through Stranger Things Season 3 on Netflix with little over 50 percent battery life.

But it isn’t just the massive battery, Dell has used a low-wattage display coupled with DDR3 RAM to keep power consumption down to a minimum on the Latitude. We noted that turning off the ExpressSign-In also helped marginally improve battery life. We’d have to give this machine a straight 10/10 in terms of battery.

The Dell Latitude 7400 has a few unique features to help improve productivity, security, and usability.

Express Sign-In: Apart from the expected fingerprint reader that doubles as the power button, the Latitude also gets a face-unlock feature. Dell has worked with Intel for the Express Sign-In feature. It uses intelligent software, an infrared camera, and a proximity sensor combined with Windows Hello to ensure security and privacy.

The sensor recognises when a user leaves the field of view and locks the system. Once the user returns, the laptop recognises it and automatically turns on the display, unlocking the account through facial recognition. 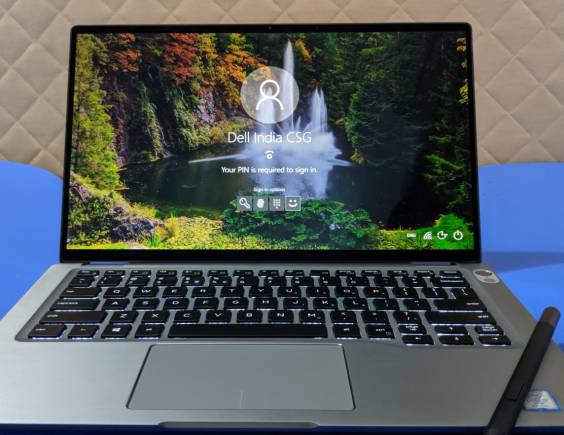 The price of the Latitude 7400 is perhaps the only undesirable feature of this notebook. The 7400 starts at Rs 1,35,00 for the base configuration, and that’s not including GST, which is quite expensive. But there are a few other things to think about before dismissing this as an overpriced 2-in-1 notebook.

The Latitude 7400 is considered a purely-business laptop. When we spoke to the people at Dell, they couldn’t have been more specific about the 7400’s primary purpose. So, it’s worth noting that most businesses wouldn’t mind paying Dell’s premium for a product that will go a long way to helping increase their overall productivity. 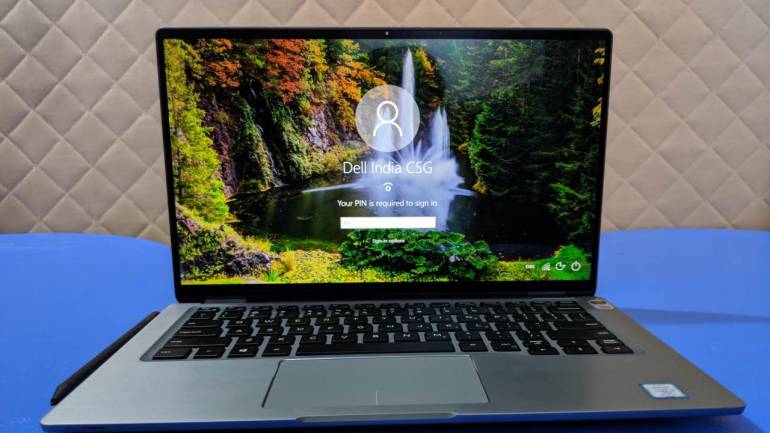 Plus, businesses buying this laptop in bulk will likely get discounts from supplier. For consumers, if your work demands travel from one part of the world to another, and you can afford the premium price, then this is the laptop you’d want in your corner. Once again, the model we received was a top-of-the-line model, which has more RAM, a more powerful CPU and a bigger battery than the base variant at Rs 1.35 lakh.

In our view, the Dell Latitude 7400 does a lot right and very little wrong. For one, the performance is up to the mark, while display could be a little better.

The downward-firing speakers are great, and cooling is efficient.  The Express Sign-In is one of those features that doesn’t feel important until you use it. Once you use it, then you simply can’t live without it.

Where the Latitude really comes out on top is in battery life. Battery life on this 2-in-1 laptop is insane, there’s not much else that can be said about it. It is crazy how long this battery lasts and how fast it charges up.

After factoring in the extended battery life and special features, one would agree that it is just about worth the steep price if the job demands productivity on-the-go.

Dell also sent us the Premium Active Pen along with the Latitude 7400. We found it particularly useful while taking notes during meetings. We’d also recommend getting the pen if you’re serious about sketching out the artwork and taking notes. The active pen can be magnetically attached to either side of the Latitude. 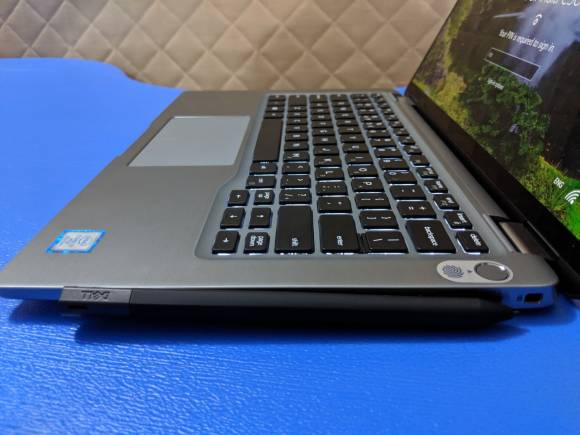 Palm rejection technology prevents potential errors when you leave a palm on the device when using the pen. You can also use buttons on the pen to launch different apps like OneNote, Cortana, take screenshots and do so much more.

Windows Ink Workspace can also be used to customise buttons according to your requirements. The Premium Active Pen can be purchased separately for Rs 6,500 + GST.

We also got a chance to take a look at Dell’s Thunderbolt Dock, which has a nice array of ports. The docking station featured two Full-size DP1.4 ports, a speaker output, one HDMI, MFDP USB-C, USB-C 3.1 Gen 2, USB-A 3.1 Gen 1 and a Gigabit Ethernet port. The WD19 is equipped with a Kensington and Noble Wedge lock slots. 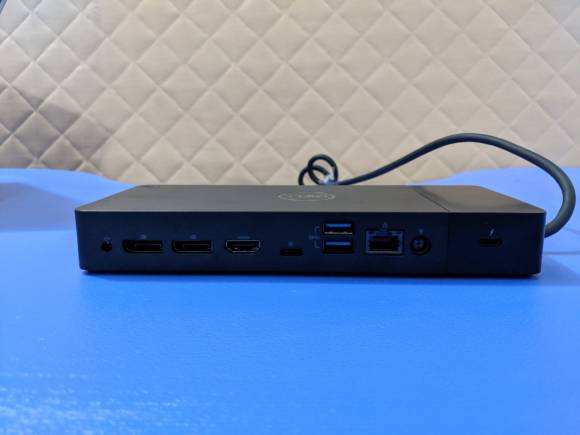 Dell claims that the WD19 is the world’s most powerful USB-C dock and will significantly enhance a user’s productivity. This docking station offers data transfer speeds up to 10Gbps and supports up to two FHD displays simultaneously. The dock also delivers 130 Watts of power, allowing for an 80 percent charge in an hour with the Express Charge feature. For any user working with multiple displays, the WD19 is an excellent choice. You can get the Dock separately for Rs 18,000 + GST.