Hero Xtreme 160R review: A muscular lightweight that surprises you at every corner

We got to test ride the Hero Xtreme 160R and aside the from the looks that we already knew were fairly radical, it promises to be a really fun bike to ride.

Hero MotoCorp launched the Hero Xtreme 160R in India after it was first showcased at the Hero World event. The bike is finally here and has started reaching dealerships as well. The good part? We got to test the bike out for ourselves, too.

Let’s start with the looks

The Xtreme 160R has pretty radical styling for a bike coming out of Hero MotoCorp. Ever since the Impulse (no, the Xpulse came later), the company has been adding focus on the bike’s designs to make them more appealing to the wider, more youthful audience. 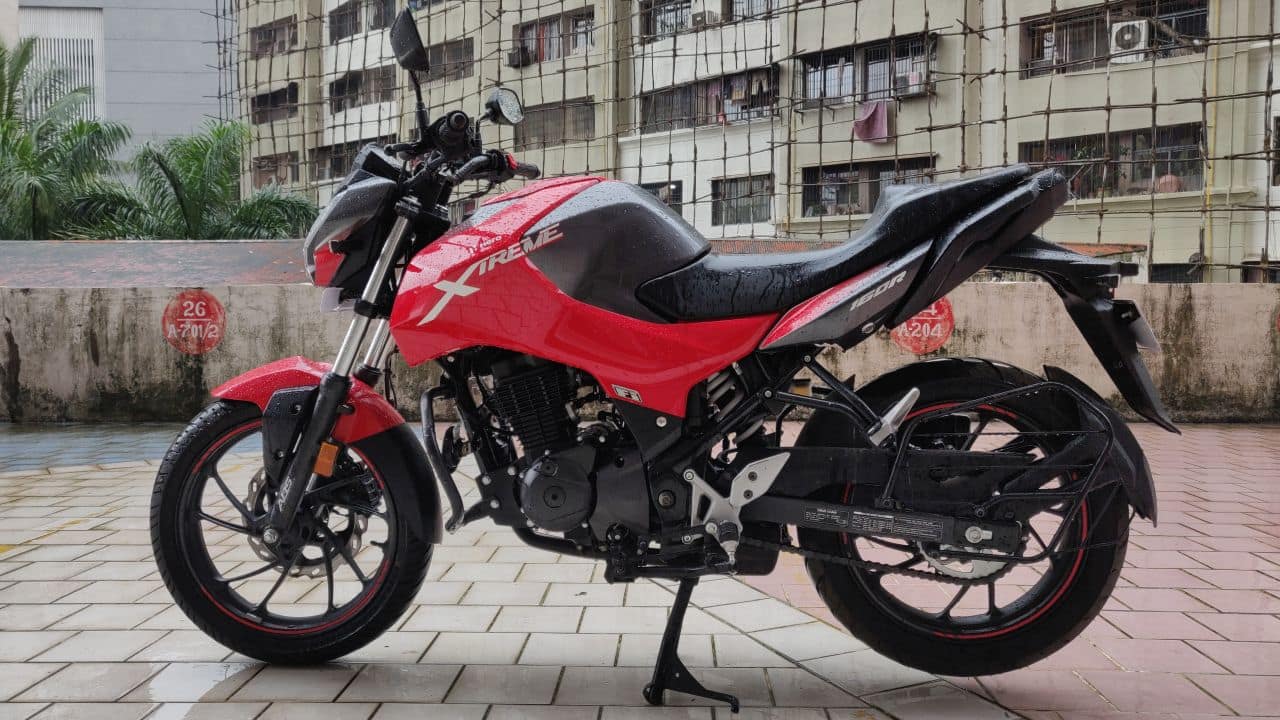 The Xtreme 160R, too, follows in this suit. The bike packs in a fairly muscular design with sharp edges all around. The tank is nice and beefy and the tail section gives off this stubby, chopped off vibe that we usually see in naked sports bikes. But the best-looking thing about this bike has to be the headlamp. The all-LED unit looks like it has been taken off a robot and is repurposed to illuminate our streets while riding. At the rear too, the tail lamp gets a smoked finish, so, while the tail lamp isn’t on, it flows into the rear section inconspicuously.

What is it powered by? 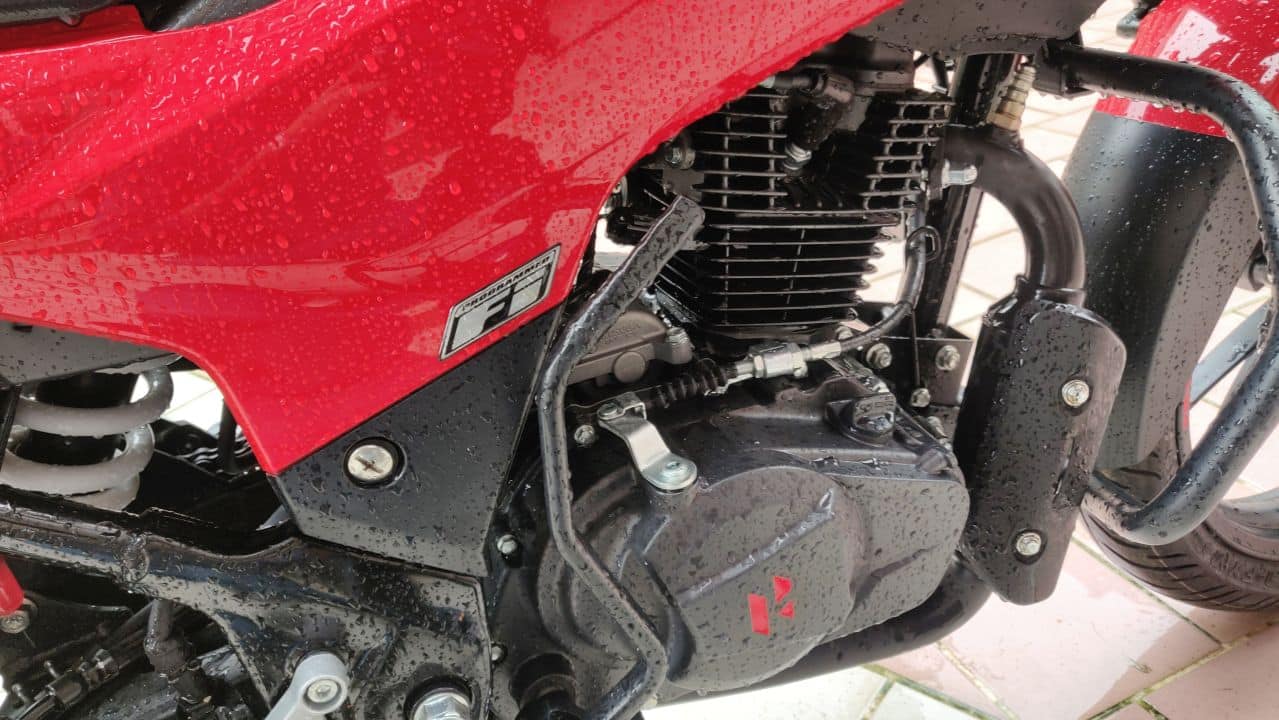 Transmission is handled by a 5-speed constant mesh gearbox. Suspension comes from a standard telescopic forks up front and a 7-step preload adjustable monoshock in the rear.

As for braking, the Xtreme is available in two options. The disc at the front is standard, but you get a rear drum variant and a rear disc variant but the price gap between the two isn’t that wide. However, both variants still only get single channel ABS.

To start with, I just have to say that the bike is extremely light. The single disc variant gets a kerb weight of just 138.5 kg while the double disc is a kilogram more. This light weight factor adds a whole lot of fun for your ride. It feels sprightly even at low speeds and the run up to the top of the meter is progressive too with no real dead spots anywhere in between. Now, the company claims a sprint from 0 to 60 km/h in 4.7 seconds. This is a pretty good time in the 160cc segment, and while my lack of right tech didn’t let me confirm it, I don’t think I doubt that that claim.

My gripe, however, came from two things. The gears for one. While the shifting itself is smooth internally, it felt like I needed to twist my ankle further up or further down to change a gear. A slightly shorter shifter or maybe even a smaller action would probably help here, but it’s nothing you can’t get used to. 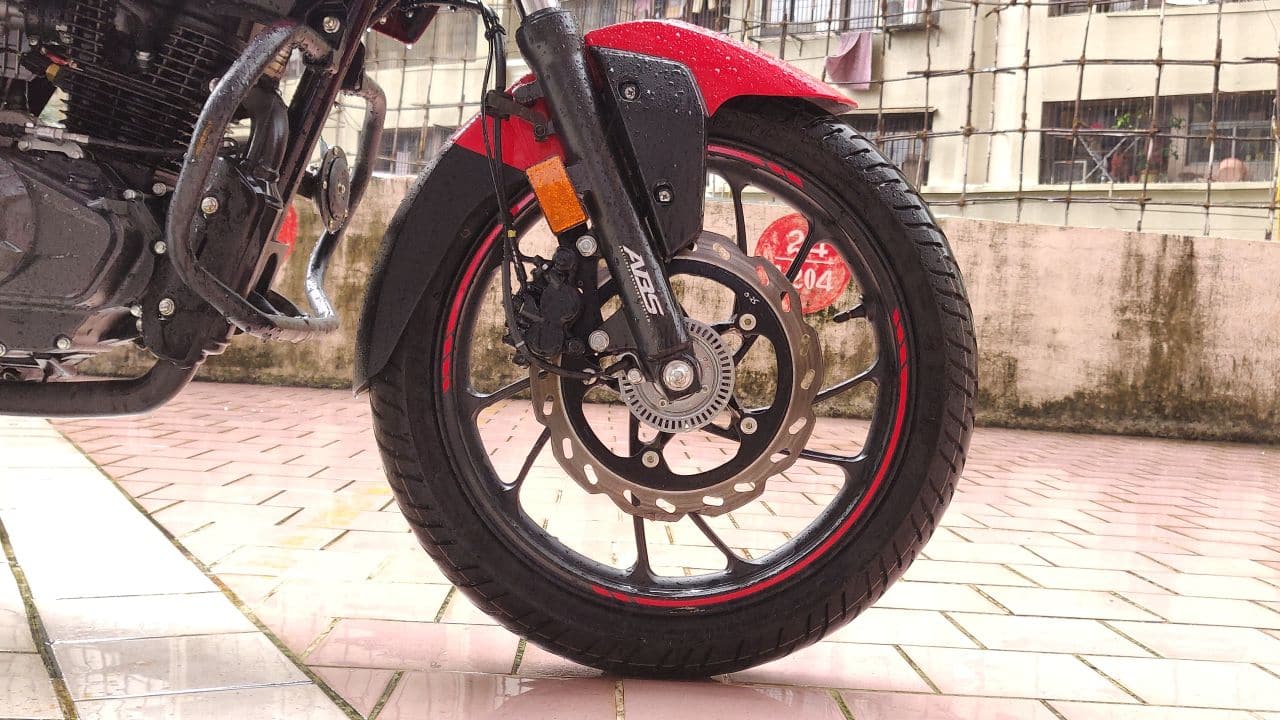 Then there is the more troubling issue. The suspension is stiff. In stock setup, you can feel almost every bump on the road. This definitely comes in handy when you’re carving mountainsides, but on Indian city streets, you’re going to have to slow down a bit. But, what makes up for this, in the little way it can, is the seat. It is wide and strikes a pretty decent balance between soft and stiff.

Coming down to riding dynamics, you sit in a fairly upright position and as with all naked sports bikes, the footpegs are rear set. So, every time you take your foot away from ground, you know you can have some fun. The bike’s handles are a standard flat bar and the length provides you with decent leverage. Add to that the light weight and the bike is extremely flickable. I saw myself cutting through traffic like its nobody’s business. The tyres too, 100/80 at the front and 130/70 at the back gives you enough confidence, even in the wet conditions that I was testing the bike in. 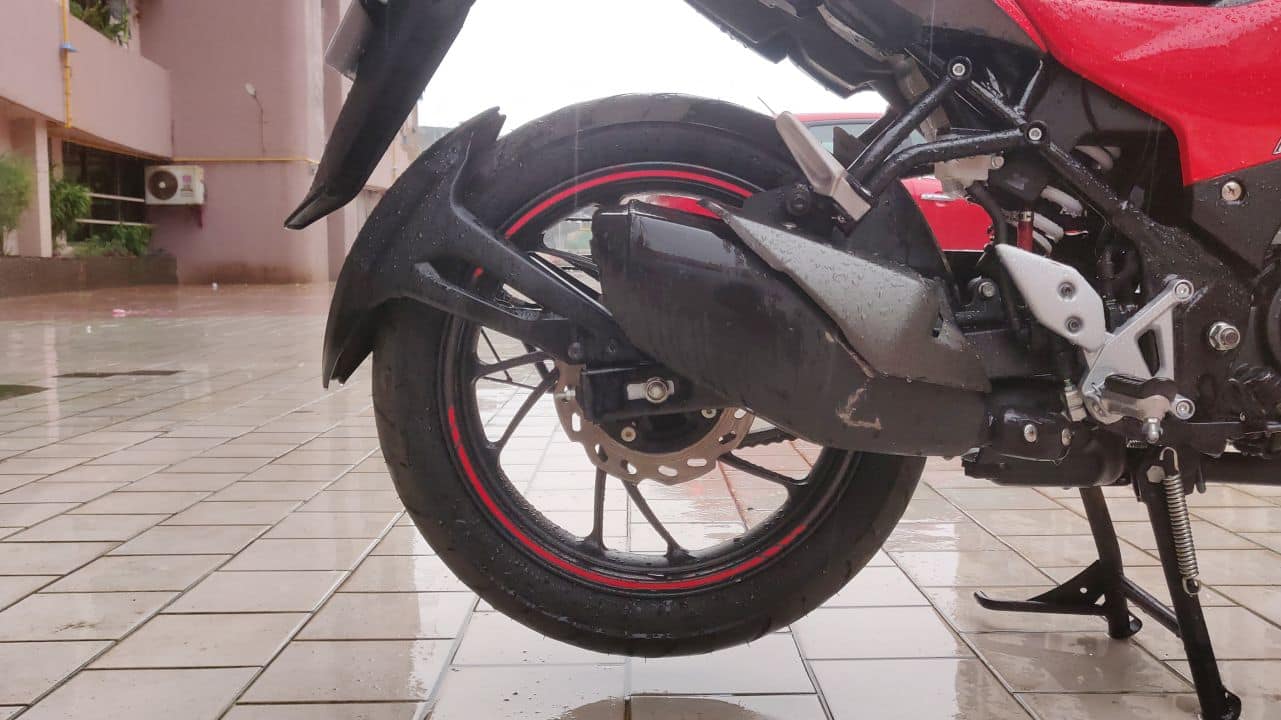 The engine refinement, too, is something special. All through my ride, I was able to hear the engine, but not in a bad way. The only time I actually felt the engine, however, was when I was at speeds in excess of 70 km/h. Vibrations, even above those speeds were muted and a long day in the saddle at cruising speeds would probably do very little to give you that buzz in the hands and feet that you would normally get.

What about build quality?

First off, the Xtreme 160R is a beautiful bike to look at, even from up close. But if you get in too close, you start to see some imperfections. The design is big and chunky but it is the minor details that may not have been given much focus. For example, the switchgear, while it worked properly, looked like poor quality plastic. The switches themselves had a tactile feel while clicking, but they were a little sticky on the fingers. 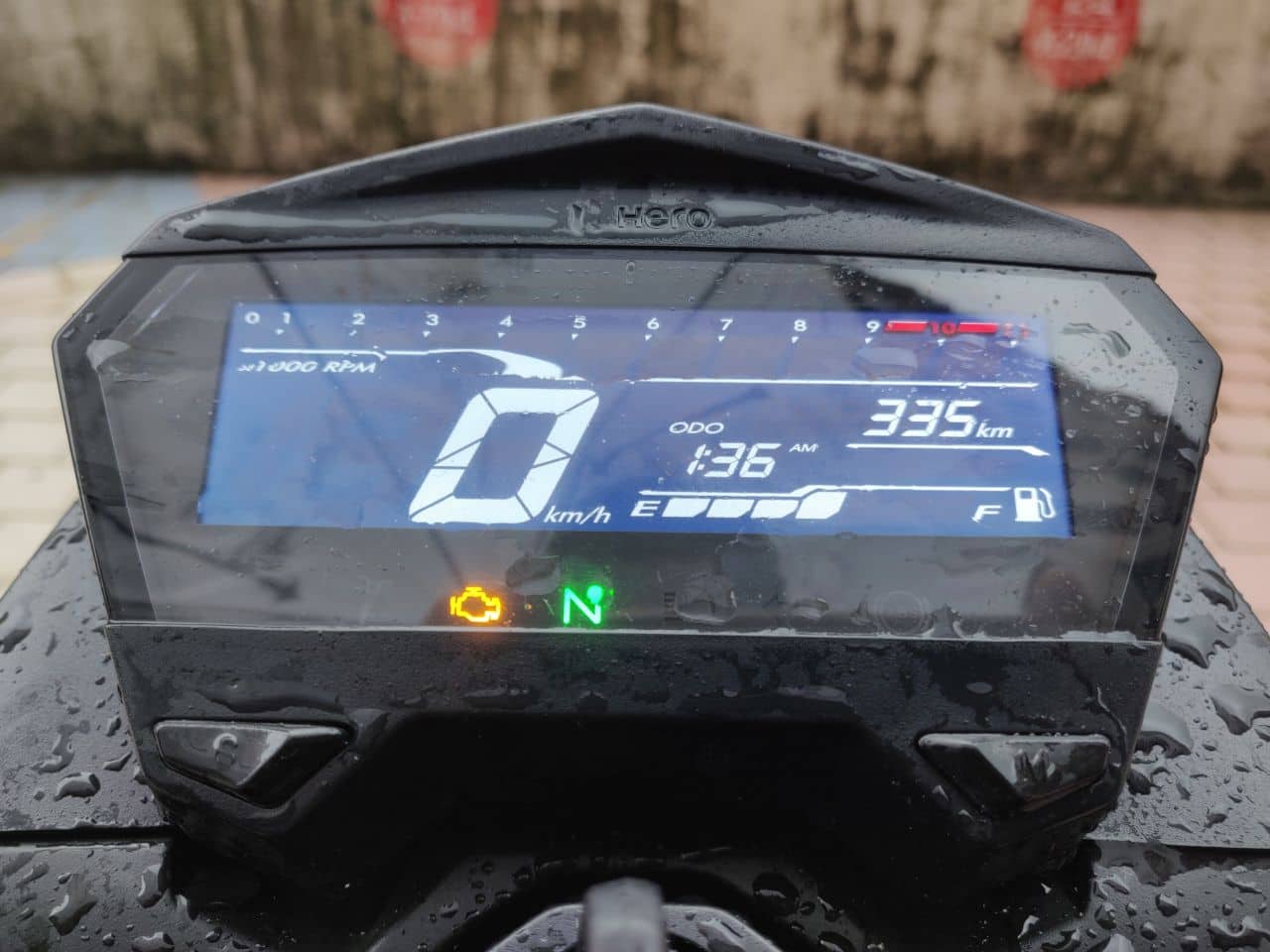 Next is the instrument cluster. Now, I’m not sure, if it was just my bike, but the it was shaky. Every little bump in the road and the dash would move forward and backward as if saying, “Hey! Look at me. I can dance.” The cluster itself is fairly informative and the blue and white LCD display is pretty to look at, and while fairly informative, I missed a gear position indicator.

And the last thing I would probably want to ask is why would Hero put in a kick start on a bike that is so beautifully built. Batteries these days are refined enough that a kick starter goes completely unused for years and its only when a rider doubts the amount of fuel in his tank, that he will ever use it which, obviously, again will be useless. 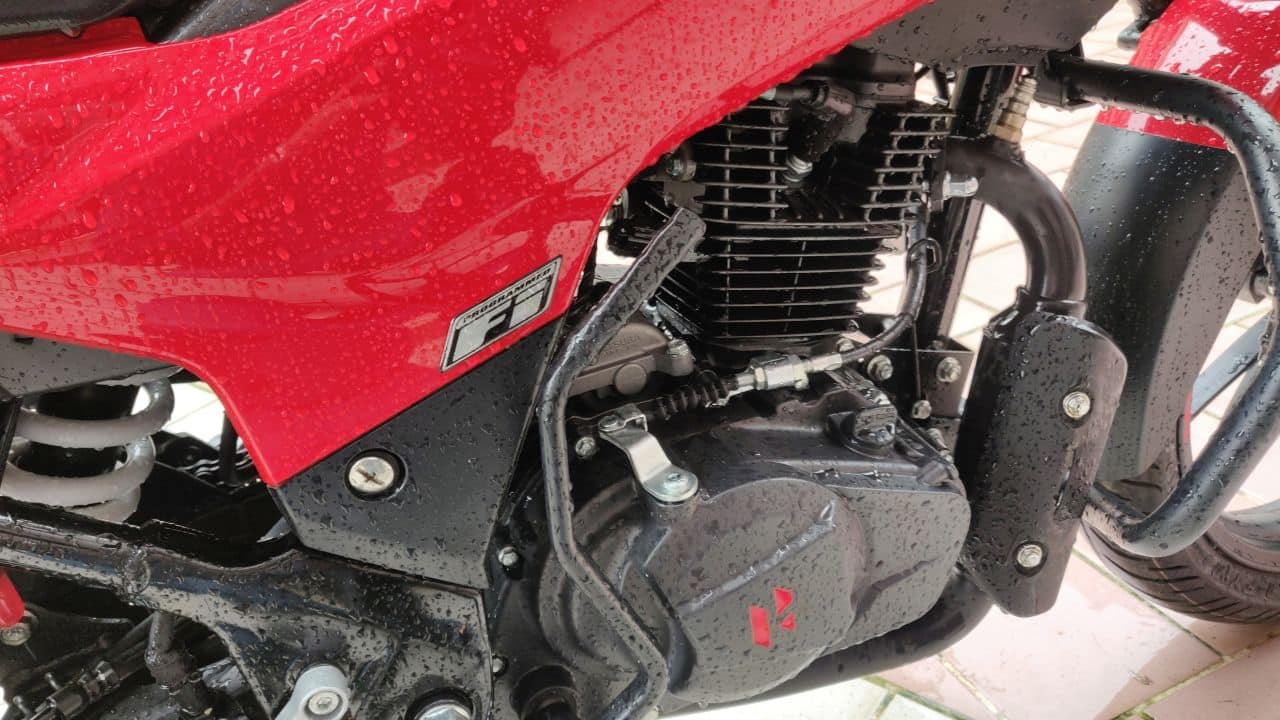 All of these, save for the dancing dash are minor details and can be overlooked easily. The rest of the bike seems to be built strong. There were no creaks, no hisses, no squeaks for the time that I had the Xtreme and that is comforting enough. To top off the safety on the Xtreme, Hero has also added in a side-stand cut--off feature so you won’t go riding around with your side-stand down.

Now, how much do I have to shell out?

Well, this is a Hero Xtreme 160R. Anything more than aggressive pricing was stupid to expect. The rear drum brake variant retails at Rs 99,950 while the dual disc variant gets a sticker price of Rs 1,03,500. At this price point, the Hero Xtreme 160R is the cheapest bike in its category rivalling the likes of the TVS Apache RTR 160 4V, Suzuki Gixxer, the Bajaj Pulsar NS160, Yamaha FZ V3.0 and the Honda X-Blade.

To me, the Hero Xtreme 160R is as beautiful to look at as it is a fun bike to ride. It’s peppy and cheerful and still exudes confidence in its stance. Not to mention, people kept asking me about the bike at every other signal, and you know that’s always fun.
Stanford Masters
Tags: #Auto #Hero Motocorp #Hero Xtreme 160R #Technology
first published: Jul 29, 2020 12:14 pm