Upcoming Event:Join us for the exciting discussion with Danone on role of nutrition, protein in working professionals’ quality of life on July 31, 3pm.
you are here: HomeNewsTechnologyAuto

The Himalayan stands tall with high mounted handlebars, a fly screen and a very comfortable seat for long rides. The instrument cluster is an amalgamation of analogue dials and digital inserts with some pretty informative read outs.

The Royal Enfield Himalayan, first launched in 2016, took off almost immediately under the brand’s name and the kind of adventure abilities it provided. But it was plagued with production issues and the low quality of parts prompted some customers to file lawsuits against the brand for either a refund or compensation. Now four years later and two emissions upgrades later, the Himalayan still goes strong.

To be fair, I never got the chance to ride the earlier bikes, but I believe the company has made some improvements and the bike does not have many of the issues it earlier had. So for the rest of this article, I’ll be giving you my opinion on the bike with occasional mentions of what I’ve heard about the previous iterations. The Himlayan, for the most part stays exactly the way it was when it was first conceptualized. This seems to be a theme for Royal Enfield – build a bike and leave it exactly the same. Yes of course, the Himalayan was and still is a huge step up from the Classics and the Bullets (I’m probably hurting some sentiments here), but one could’ve done with a little more upgrade.

The Himalayan stands tall with high mounted handlebars, a fly screen and a very comfortable seat for long rides. The instrument cluster is an amalgamation of analogue dials and digital inserts with some pretty informative read outs. But the digital compass, just like the battery voltage indicator on the Classic, seems pretty much useless to me. Now for the powertrain

The Himalayan is powered by a new BS-VI 411cc single-cylinder air cooled motor that produces 24.5 PS at 6,500 rpm and 32 Nm of peak torque between 4,000 and 4,500 rpm. This is mated to a 5-speed gearbox. The Himalayan is built on a half-duplex split cradle frame suspended by 41mm telescopic forks at the front and a rear monoshock with 200 mm and 180 mm of travel respectively. Give the bike a ground clearance of 220 mm and what you have is a very capable off roader.

This was what Royal Enfield was going for when the ADV was conceptualized, a bike that was easier to navigate over rocks and hills. Hence the name Himalayan. But they didn’t really do a good job of it. Sure, the ground clearance was good and the suspension was nice and the engine was torquey enough as well. But, when the Himlayan was first launched, only its export units received fuel injection and ABS, while we were stuck with a carb that would choke in high altitudes. Since then we did get the components, but the company also made the ABS switchable which means I get to slide around in the dirt as well as keep from sliding around on the pavement and no more cold-start problems since the fuel pump now takes care of that.

How does it ride you ask?

How does any ADV ride? It is tall, a little heavy to turn in and a 21-inch rim that feels fairly numb. But all of this is on the street and at highway speeds. You need to take the Himalayan to where it belongs. No, I couldn’t go to the mountains, what with all the viruses everywhere, but I did take it for a joy ride to the nearby trails.

Here, the Himalayan performed more like a dirt bike than a big lumbering ADV. At slower speeds and standing up, the Himalayan is quick to turn and extremely easy to handle. The high ground clearance like I mentioned also means the seat is a little high. Not a problem for taller riders, but I am not one of them. Still, once you get used to the balance of the bike, the weight becomes a non-issue. Our test bike also came with hand guards and panniers. So we tried riding it with it on and off. Safe to say the bike still stays perfectly balanced either way. The handguards on the other hand, I’d probably get rid of them and get something that would actually protect my levers. 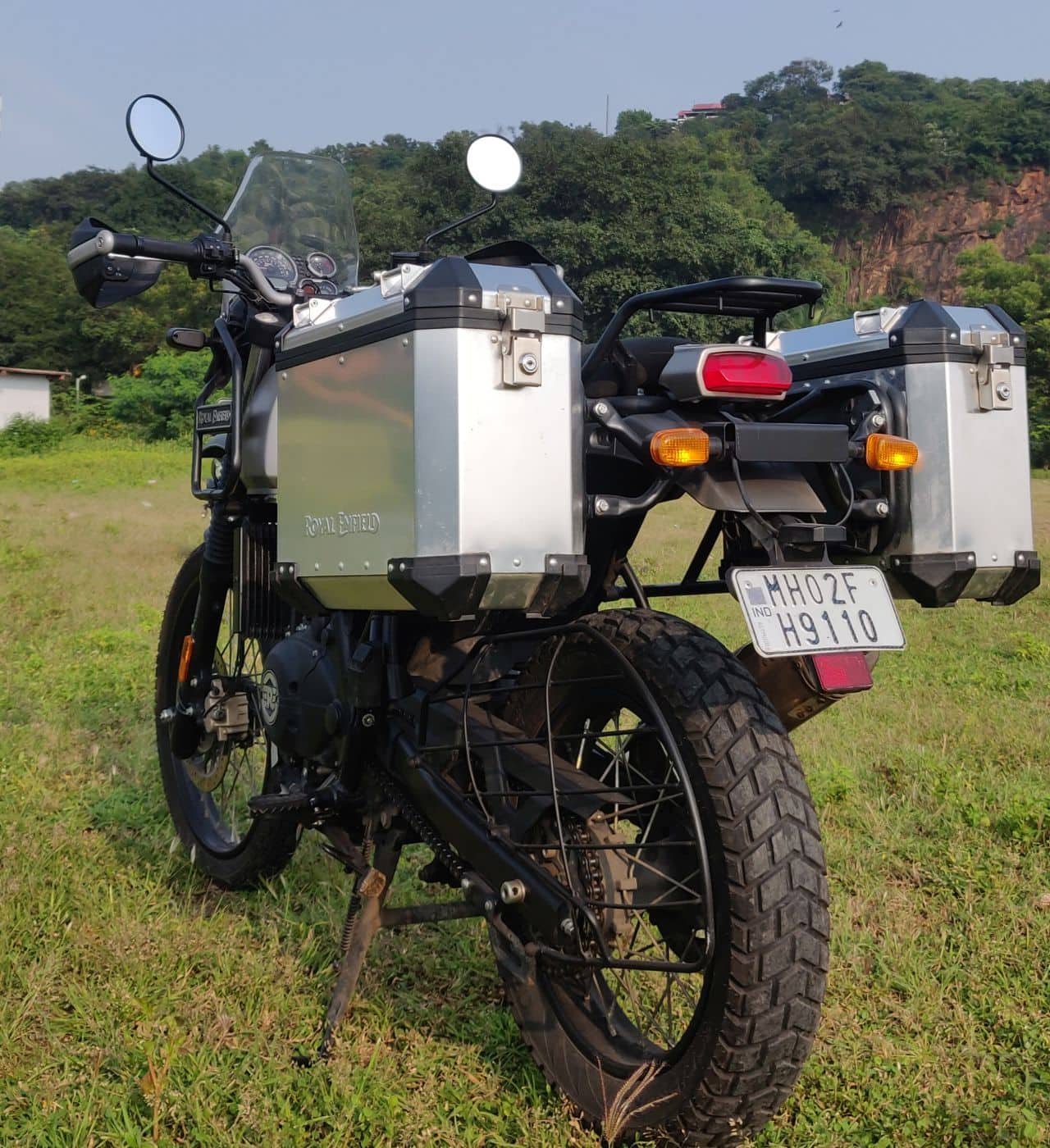 While we are on the subject of panniers, I noticed that I couldn’t park the bike on the kick stand when I had them on. I heard that Royal Enfield had lengthened the kick to keep the bike from leaning over too much, but now if I have the panniers on, the bike barely leans over at all. For someone travelling with a lot of luggage, this could mean a lot of back breaking main stand parks. I’d probably swap that out too.

So then, is it worth price?

Well, yes and no. The Himalayan is a hugely capable bike with nothing that compares to it in the same price range. At Rs 1.91 lakh, the Himlayan is closer to the Hero Xpulse 200, but in terms of engine capacity, it stars in the same league as the KTM Adventure 390 and the BMW G 310 GS, both of which are priced significantly higher than the Himalayan. But, on the other hand, the Xpulse shines a little more than the Himalayan in the mud while the KTM and the BMW get better performing engines and more tech. Overall, the Himalayan is a wonderful bike in this middle-ground. It will munch miles on tarmac while still daring to take you into the forest on an adventure.
Stanford Masters
Tags: #Auto #review #Royal Enfield #Royal Enfield Himalayan #Technology
first published: Oct 3, 2020 01:43 pm