So, stick around to get our thoughts on the new Asus ZenBook Flip 14 UM462DA.

In terms of design, the new ZenBook Flip weighs in at little under one and a half kilos, a bit on the lighter side for a 14-inch laptop. Asus’ latest ZenBook Flip laptop features an aluminium top case and a plastic bottom cover. The entire chassis and both 360-degree ErgoLift hinges, give the appearance of a premium laptop that is quite sturdy.

Our model came in a silver finish with a subtle Asus logo on the lid. If Asus’ claim of US Military-grade quality is to be believed, it could be able to withstand a drop or two – We don’t recommend trying this though.

The ZenBook Flip packs a tenkeyless keyboard and a smooth touchpad. The chicklet keys are well spaced out and easy to type on, despite the considerably small strokes. Moreover, the backlighting on the keyboard is quite good, making keys visible in all light. The ErgoLift hinge design offers a slight elevation, which is better than typing on a flat keyboard. Moreover, the arrow keys are squished in the corner. The ZenBook Flip 14 UM462DA doesn’t get an integrated number pad and a fingerprint reader on the touchpad. However, it’s considerably difficult to fit a full-size keyboard on a 14-inch laptop with a 13-inch chassis. The touchpad is pretty smooth and responsive, getting the job done.

The trackpad subtly hides two buttons, which offer a nice feel once pressed down on. There’s not much to complain about here, the keyboard and touchpad provide a comfortable typing and scrolling experience, whether the notebook is on a desk or your lap.

Asus has incorporated a decent number of ports on the new ZenBook Flip. You get three USB ports, including a Type-C port. The 2-in-1 notebook also features a full-size HDMI port, a MicroSD card slot, and a headphone jack. In terms of a 14-inch laptop, the ZenBook Flip has an appropriate number of ports. The new ZenBook Flip features a 14-inch 1080p glossy IPS touchscreen with a 60Hz refresh rate. Because the display uses an IPS panel, viewing angles are great on the laptop. The screen also offers a maximum brightness of little under 280 nits, which is quite good in any indoor scenarios. However, bright sunlight does make life hard for this display.

The IPS panel also offers 85-per cent sRGB coverage, which is suitable for photo editing. The display on the ZenBook Flip features touch support. The new ZenBook can also be used in different orientations. The interface also works seamlessly when you want to use the convertible laptop in different orientations, like a tablet mode. Asus also includes a stylus with the device, which isn't the best but is quite useful in some scenarios. The LCD screen on this 2-in-1 notebook has thin bezels on all four sides with an excellent 90-percent screen-to-body-ratio. The NanoEdge display also allows for a much more compact design, letting Asus fit a 14-inch screen on a 13-inch laptop. Additionally, the top bezel on the screen houses an HD webcam with 3D IR capability for fast face-login and a new four-element lens for sharper images.

On the performance front, the new ZenBook Flip is powered by an AMD Ryzen 7 3700U processor paired with 8GB of 2400MHz DRR4 RAM. The notebook also packs a 512GB PCIe SSD for faster read/write speeds. The four-core CPU features a base clock of 2.3GHz and a boost clock of 4GHz.

So, let’s see how those specifications translate to real-world scenarios.

Firstly, multi-tasking with MS Office, Chrome and other mainstream apps won’t be an issue. In Geekbench 5 benchmark, the ZenBook Flip’s AMD’s Ryzen CPU scored a multi-core score of 2589 points and a single-core score of 788  points. In the Cinebench R15 test, the laptop scored 309 and 1238 points in single and multi-core tests, respectively.

Apart from multitasking, the ZenBook Flip can also handle casual gaming. Games like Heroes of the Storm, Overwatch and DOTA 2 will give you playable frame rates on low settings, while Counter-Strike: Global Offensive and League of Legends will provide you with decent fps on medium settings. However, we wouldn’t recommend gaming for more than a couple of hours of this machine. While the Ryzen CPU may not be as fast as its Intel counterpart, the Radeon RX Vega 10 graphics can easily best Intel’s UHD Graphics 620. The new RX Vega 10 is based on 5th gen GCN Vega architecture. It also supports DirectX 12 and performs somewhere between an Nvidia GeForce 940MX and MX150.

Asus has just incorporated a single fan, vents on the back and an ErgoLift hinge for cooling. The fan produces some noise when the laptop is put under moderate load but remain relatively quiet most of the time. Surface temperatures remain relatively cool on the ZenBook Flip 14 and heating won’t be an issue with the laptop on your desk.

The UM462DA packs a 42Wh battery that’s capable of decent battery life for regular workloads. The new ZenBook Flip 14 offers up to seven hours of battery life running Chrome and MS Word with the screen on 40-percent brightness. If you’re looking for great battery life, the VivoBook might be a better option.

Asus and Harman Kardon have partnered on the audio for the new ZenBook. The downward-firing stereo speakers aren’t the best but reproduce sound accurately with impressive bass. Asus has also incorporated an AudioWizard app offers sound presets based on the type of content. And, while listening to much shouldn’t be much of a problem, watching a movie, videos or shows requires external speakers or headphones. Music was quite audible in a quiet room with a fan, but conversations and dialogues proved very difficult to hear. It’s safe to say that the Harman Kardon branding didn’t impress.

The Asus ZenBook Flip 14 UM462DA starts at Rs 64,990. Our model with the Ryzen 7 CPU will set you back Rs 74,990, which is a bit on the expensive side, especially considering its AMD chip. The new ZenBook Flip 14 is a very good laptop with a few caveats that can be overlooked, depending on your requirements.

There’s a great balance of performance here, the Ryzen 7 3700U CPU may not be as capable as an 8th Gen Intel Core i7 but offers more bang for your buck and gets the job done for mainstream usage. The design of this convertible notebook is nothing short of premium, and it doesn’t feel like a cheap laptop. The IPS touchscreen and 360-degree hinge design allows you to effortlessly switch between tablet, tent, and traditional laptop mode. 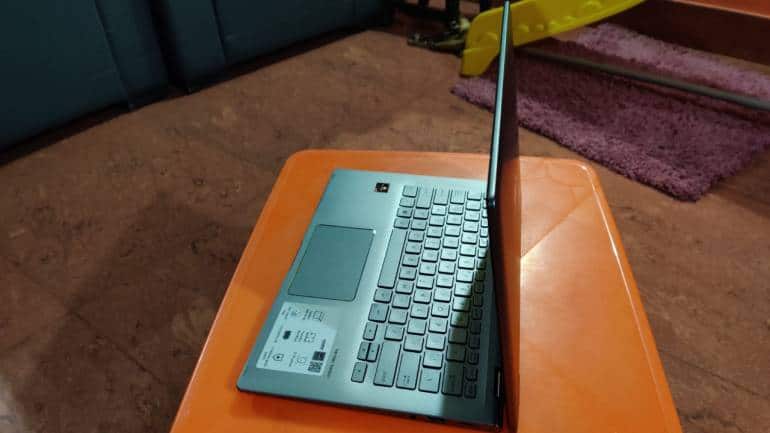 Moreover, we couldn’t find much fault in the display while using it indoors.

The latest addition to Asus’ ZenBook Flip lineup also doesn’t offer good battery life, and this isn’t a laptop that will get you through an eight-hour workday on a full charge. While the battery is below the average at this level, it isn’t that far behind its competitors. Additionally, the audio here is sub-par, and the screen isn’t the best for outdoor use in bright natural light.

So, should you buy the new ZenBook Flip 14 UM462DA? Well, if you’re looking for a 2-in-1 laptop with good performance and a premium design, then; “Yes”. However, with the Intel 10th Gen CPUs making their way on laptops, we'd suggest looking elsewhere.
Invite your friends and family to sign up for MC Tech 3, our daily newsletter that breaks down the biggest tech and startup stories of the day
Carlsen Martin
Tags: #Asus #laptops
first published: Nov 12, 2019 01:41 pm