The Asus ROG Strix Scar 15 was unveiled in India earlier this year. While Asus’ Strix series may not be its most powerful line of laptops, they do offer a ton of power while offering some of the boldest designs among gaming laptops. And the latest Strix Scar 15 (2022) is no exception.

You can’t talk about the Strix’s design without talking about the RGB lighting here. First off, the keyboard has RGB lighting, while the ROG logo on the lid also lights up. There’s also a light strip that runs through the front of the laptop, right under the trackpad. The overall design of the laptop itself is similar to last year’s model with vents on the sides and back as well, while the two extra faceplates for the ROG section of the hinge are interchangeable. The lid does attract smudges, so you’ll have to wipe it down every now and then. 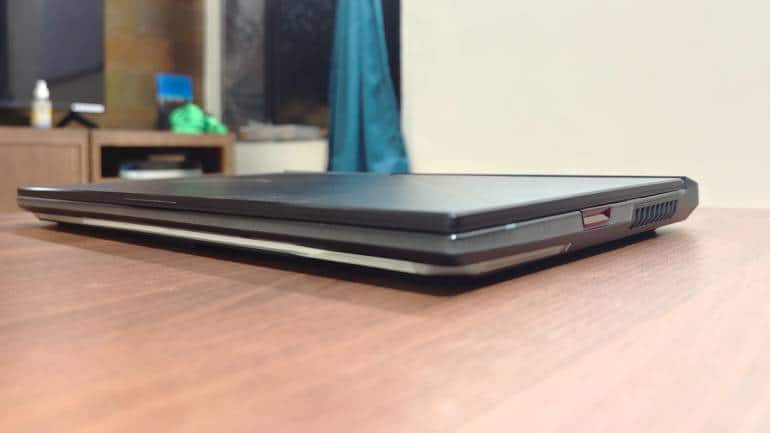 The new Strix Scar 15 weighs around 5.07 lbs or 2.30 kg and measures 27mm thick or 1.07-inches thick. Not to mention the added weight of the adapter. While the chunky build might not be as appealing as slim and light gaming laptops, it does offer much more room for cooling those powerful components, which is critical to improving performance. The new design element on the Strix Scar 15 is seen on the right of the keyboard, which has a translucent portion that gives you a look at the device’s internals.

The ports on the ROG Strix Scar 15 are spread out on the left and back of the machine. There are two USB Type-A ports and a 3.5mm audio jack on the left side, while the rest of the ports sit on the back of the laptops. These include an HDMI 2.0 port, an Ethernet port, and a pair of USB Type-C ports, one of which supports Thunderbolt 4. There’s a Keystone 2 reader on the right, which is a personal key that can be used to save personal settings. Asus also refers to it as a ‘shadow drive’ as it can also be used to access a private storage space. For wireless connectivity, the Strix Scar 15 (2022) also supports Wi-Fi 6E and Bluetooth 5.2.

The Strix’s chiclet-style keyboard comes with per-key RGB backlighting. There’s no Numpad on the left, but you do get a couple of dedicated media buttons on the right and top of the keyboard. The keyboard was good for gaming, with the keys offering a decent amount of travel. Additionally, there was more than sufficient spacing between the keys to offer a comfortable typing experience. You can customise the keyboard’s lighting through the Armoury Crate software, while you also get preset lighting modes that can be activated directly from the keyboard. The keyboard also has adjustable levels of brightness. The Strix Scar 15 also gets a glass touchpad that was convenient to use in part thanks to its smooth surface. The touch response was also quite good while there were no issues with palm rejection. The Strix also doesn’t have an LED Numpad on the touchpad. The keyboard on the ROG Strix 15 is excellent for both gaming and working, while the touchpad gets the job done.

Our Strix Scar 15 model came with a 15.6-inch WQHD (2560 x 1440 pixels) IPS panel with a 16:9 aspect ratio. The display boasts a super-smooth 240Hz refresh rate and a 3ms response time. The panel also covers 100 percent DCI-P3 coverage and Dolby Vision support. There’s no G-Sync support, but you do get Adaptive-Sync to reduce ghosting and frame rate tearing. The display also has relatively slim bezels on three sides and excellent viewing angles. The new 240Hz display is excellent for gaming and ensures zero input lag. 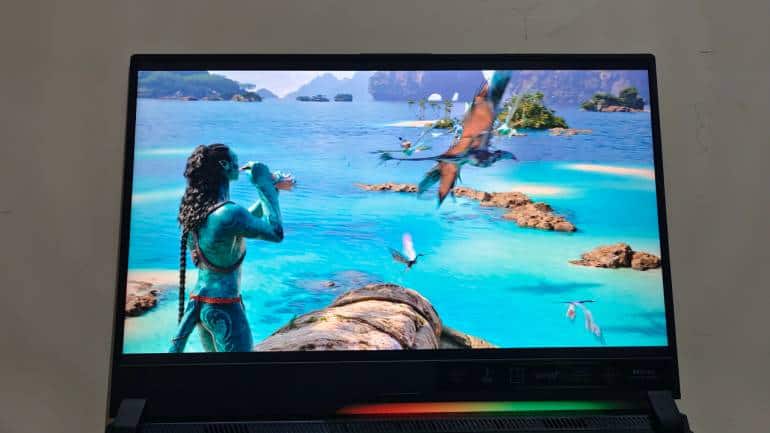 Additionally, the screen offers a nice balance between content consumption and gaming. AAA titles offer excellent visuals, while the panel is fast enough for players to enjoy competitive multiplayer shooters. Watching content on the screen was also a joy, while the Dolby Vision HDR was the cherry on top. The one noticeable absentee here is the lack of a Pantone validation, which has become a staple of ROG laptops. On the flip side, the screen gets plenty bright and can be used for work outdoors. Overall, the display on the new ROG Strix Scar 15 is one of the best in the segments.

The audio on the Strix Scar 15 was handled by powerful quad speakers with Dolby Atmos support. I found the sound to be fairly rich with good bass response, while the audio was loud enough to fill a small room. However, I did experience distortion at around 60 percent volume. But this may be a problem with my review unit as this is the first time, I’ve experienced these levels of distortion on a ROG laptop. There’s no webcam on the Strix Scar 15 but Asus does include a pretty capable one in the box that can do 1080p video at 60fps.

For performance, the new Strix Scar 15 is powered by a 12th Gen Intel Core i9- i9-12900H processor paired with 32GB of DDR4 RAM and 2TB of PCIe Gen 4 SSD storage. The laptop also comes with a dedicated Nvidia GeForce RTX 3070 Ti laptop GPU. The laptop also comes with a MUX switch (Accessible through Armoury Crate) that can be toggled to give you an up to 10 percent boost in gaming performance. So, let’s take a look at some real-world results. 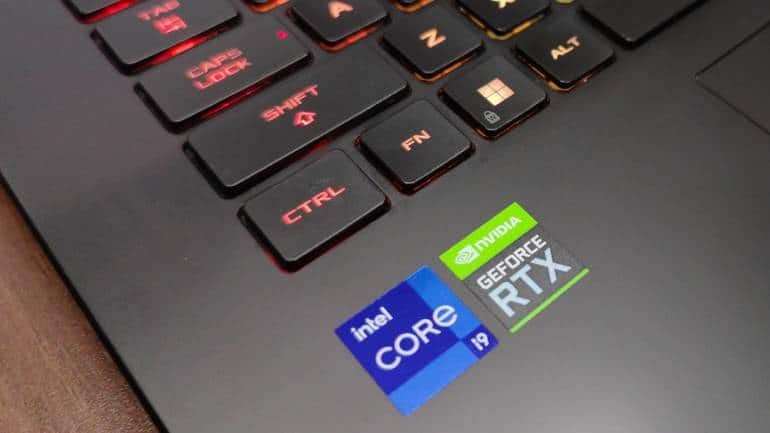 Asus has also equipped the Scar 15 with improved thermals that include four heatsinks, two Arc Flow fans, a ton of vents, and a liquid metal compound on the CPU. The CPU here hit 95 degrees C in Turbo mode while gaming, while the GPU settled at around 85 degrees. In the long run, I did see temperatures settle at around 85 degrees C for the CPU and 75 to 80 degrees C for the GPU. Most of the heat strays away from the keyboard area and is emitted out of the vents, making the overall gaming experience rather convenient. The fans on the Strix Scar 15 were also relatively quiet as compared to most other gaming laptops we’ve seen with so much power.

Asus has also equipped with the new Strix Scar 15 with a 90Whr battery, while a 240W adapter is bundled in the box. As with most Intel laptops, battery life here was fairly average. I got around four hours of battery life on a single charge when using MS Word and Google Chrome simultaneously, which isn’t bad for a gaming laptop. But when compared to what some AMD machines can do, the new Strix Scar 15 does fall a bit flat. You can use the Armoury Crate software to further increase battery life with a few tweaks, including Panel Power Saver and MSHybrid Mode when Nvidia Optimus is enabled. The former turns the panel’s refresh rate to 60Hz whenever the charger isn’t plugged in, while the latter disables the discrete graphics and runs the laptop on the integrated Intel Iris Xe graphics. The battery life on the Strix Scar 15 (2022) was pretty good for a gaming laptop but fairly average by consumer notebook standards.

With a price tag of Rs 2,64,990, the Asus ROG Strix Scar 15 (2022) doesn’t come cheap. However, after a little digging, I found this to be the norm among other similarly specced gaming laptops. But unlike most other gaming laptops, the Strix Scar 15 is quite the performer. The Strix Scar 15 delivered some of the best benchmarking results and gaming performance I’ve seen on a laptop in this segment. What’s more is that it had an excellent display, a comfortable keyboard, a solid assortment of ports, and some neat software tricks to improve performance and converse battery life. Lastly, the Strix doesn’t shy away from its gamer DNA with the over-the-top aesthetics we’ve come to expect with the Strix series. One can also appreciate the fact that there is a superb webcam bundled in the box, although it would be nice to have one integrated into the machine. Laptop prices have gone up in the past couple of years and Asus hasn’t been immune to the hikes. But there’s no doubt that the ROG Strix Scar 15 (2022) is a mobile powerhouse that can keep pace with just about any laptop in the segment. As far as gaming laptops are concerned, this is definitely one of the most powerful machines I’ve tested, and it doesn’t meet the desktop replacement requirements. If you are looking for a powerful gaming laptop in 2022, I think the ROG Strix Scar 15 is worth considering.
Carlsen Martin
Tags: #Asus #Asus ROG #gaming #gaming laptops #Intel #NVIDIA
first published: Jun 29, 2022 03:24 pm