Check out all the biggest announcements from Apple's Spring Loaded event!

Apple just concluded its first major product announcement for 2021. Spring Loaded has given us a ton of new products, including AirTag, a new iPhone 12 colour variant, a revamped Apple TV 4K, and lastly, an M1 powered iMac and iPad Pro. There’s not much to say about the new iPhone 12 model, apart from the fact that it now comes in purple.

First up is the new iPad Pro, the highlight of the night. Apple launched two models of the iPad Pro, powered by its powerful M1 chip. The 11-inch iPad Pro’s price is set at Rs 71,900, while the 12-inch iPad Pro costs Rs 99,900. The iPad Pro models are available in Space Grey and Silver colour options. Apple claims that the new M1 chip in the iPad Pro can deliver 1,500 times faster graphics performance than its predecessor. Additionally, the iPad Pro now arrives with an improved camera and display as well as Thunderbolt and 5G support. According to Apple, the new image signal processor and LiDAR scanner can capture “incredible detail” in low light. The new camera system includes a 12 MP ultrawide camera and a TrueDepth camera on the front for facial recognition. The 12.9-inch iPad Pro will feature a new Mini-LED, Liquid Retina XDR, display with 10,000 Mini LEDs.

The 24-inch iMac has also been updated with the new M1 chip. The new 24-inch iMac’s price in India starts from Rs 1,19,900. The iMac is available in green, yellow, orange, pink, purple, blue and silver colour options. The new iMac also features a new 24-inch 4.5K Retina Display and maintains a much smaller footprint, making it only slightly larger than last year’s 21.5-inch iMac. Apple also claims that the camera, microphone and speaker system on the new iMac are the best on an iMac to date. The thermal system from previous iMacs has been replaced with two compact fans, but still runs cooler and quieter thanks to the M1 chip. The new 24-inch iMac also has a magnetic power cable, while the Ethernet can be connected to the power brick. The iMac also has up to four USB-C ports, two of which support Thunderbolt.

There’s a new model of Apple’s TV 4K that improves on the older model from 2017. The new Apple TV 4K is powered by the A12 Bionic chip. With the new chip, Apple TV 4K can play HDR video at higher frame rates and will also support 60fps Dolby Vision playback over AirPlay from a compatible iPhone. It also supports Dolby Vision and Dolby Atmos sound codecs, although there’s no support for a 120Hz refresh rate. While the TV box has the same design as previous editions, the remote has got a design overhaul for a more ergonomic design and more functions. The new Siri-enabled remote also has a five-way touch controller and a Siri search button. A new Apple TV 4K feature will allow the box to optimize the colours of the TV screen with the help of the light sensor on the iPhone. The Apple TV 4K’s price is set at Rs 18,900 for the 32GB variant and Rs 20,900 for the 64GB model.

Lastly, Apple AirTag is the company’s new tracking device, which allows users to track items within Apple’s “Find My” app on iOS. The AirTag’s U1 chip uses Ultra-Wideband technology, haptic feedback, and sound to help users locate items. AirTags will be useful for tracking smaller items like keys, wallets, etc. The AirTag packs a built-in speaker, accelerometer, Bluetooth LE, and a user-replaceable battery. 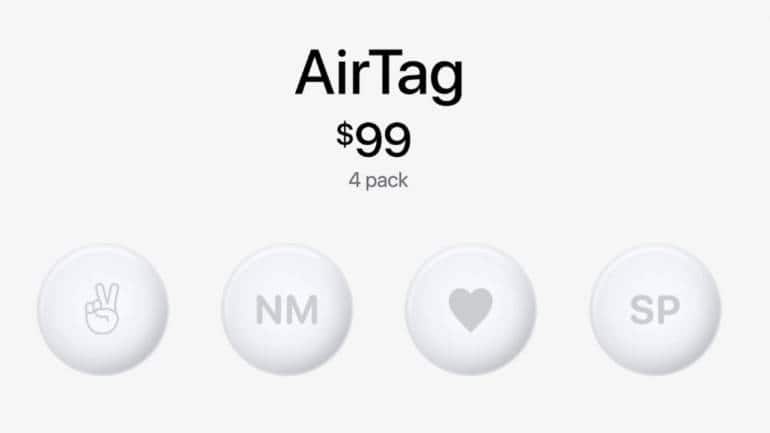 You can use NFC tap to activate a lost mode and Apple says battery life should last for about a year. It is worth noting that AirTags don’t store any location data or location history and uses end-to-end encryption when it communicates with the Find My network. Apple AirTag is priced at $29 or $99 for a pack of four.
Invite your friends and family to sign up for MC Tech 3, our daily newsletter that breaks down the biggest tech and startup stories of the day
Moneycontrol News
Tags: #Apple #Apple TV #iMac #iPhone #PC #smartphones
first published: Apr 21, 2021 12:49 am