Upcoming Webinar:Innovate Your Future at India Inc. on the Move on August 26 and 27, 2021 at 10am, with Rockwell Automation
you are here: HomeNewsPolitics

Manish Maheshwari, the MD of Twitter India has been asked to report to the Loni Police Station and record his statement within seven days.

The Uttar Pradesh Police have sent a legal notice to the Managing Director (MD) of Twitter India in connection with posts on the micro-blogging site related to the assault of a Muslim elderly man in Ghaziabad.

Manish Maheshwari, the MD of Twitter India, has been asked to report to the Loni Police Station in Ghaziabad district of UP and record his statement within seven days of the notice. 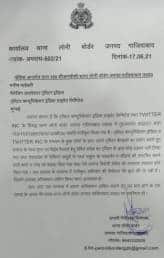 Ghaziabad police had earlier this week booked Twitter India, some Congress leaders, and a few journalists including Rana Ayyub and Mohammed Zubair for ‘inciting communal sentiments’ through tweets related to the assault of the elderly man.

In the FIR, the Police invoked IPC sections 153 (provocation for rioting), 153A (promoting enmity between different groups), 295A (acts intended to outrage religious feelings), 505 (mischief), 120B (criminal conspiracy) and 34 (common intention) against them.

Twitter has been accused of not removing the "misleading" content linked to the June 5 incident in which an elderly Muslim man had alleged that his beard was cut off and he was forced to chant "Vande Matram" by a group that assaulted him.

The Uttar Pradesh police have denied any communal angle in the incident saying that the victim and the accused knew each other.

Soon after the FIR was lodged, the micro-blogging site reportedly lost intermediary status and could lose legal protection because of its failure to comply with new rules requiring it to appoint key officers in India, according to reports.
This means Twitter could now be liable for content that is published on the social media platform and cannot claim protection under the "safe harbour clause".
Maheshwari was also questioned by Delhi Police on May 31 over BJP spokesperson Sambit Patra's tweet being tagged as "manipulated media", as per reports.
Moneycontrol News
Tags: #Current Affairs #Ghaziabad #India #IT Rules #Manish Maheshwari #Ministry of IT and Electronics #Politics #Twitter India #Uttar Pradesh Police
first published: Jun 18, 2021 10:12 am