Upcoming Webinar:Join our experts for discussion on ‘Re-inventing Finance: with Process, People & Technology’.
you are here: HomeNewsOpinion

The large scale return of NRIs from the ‘Gulf’ will present an unprecedented unemployment crisis. This will be coupled with a sharp decline in remittances to India

From the indentured labourers sent to Britain during the colonial rule and the Partition of the subcontinent, we have had a long relationship with migration. Today, India has the largest global diaspora in more than 110 countries. There are 30 million Indians overseas and India was the top recipient of remittances in 2018 with $79 billion inward remittance. These millions of people sending billions of dollars as remittances to their families has helped India, as it has become an unavoidable source of their well-being and the national income.

The states in India which see the large scale migration are Uttar Pradesh, Bihar, Rajasthan, Tamil Nadu, Kerala and Andhra Pradesh. These states account for more than 80 percent of India’s total remittances, with Kerala having the highest (19 percent). UP has the most number of migrants, followed by Bihar. The current population of migrants in select countries is given below. India’s relationship with West Asia (or the Gulf, as it is commonly referred to) goes long back and the flock of migration from Kerala to West Asia during the 1970’s and 80’s leading to the ‘Gulf Boom’ strengthened these ties.

Kerala’s economy is particularly dependent on such remittances, and has been in the forefront of the state’s economic growth. In 2003, remittances were 1.74 percent higher than the state revenue receipts. Remittances from abroad have proved as a better source for the poor than any foreign aid or investment, as they directly receive cash for their daily expenses.

While the Indian economy as a whole is not dependent on the remittances from abroad, states such as Kerala and Punjab are among the most remittance-dependent economies in the world.

According to the World Bank, 82 percent of the remittance receiving households in India received remittances in cash, 15 percent as cheques or draft, and 2 percent as money orders. The Reserve Bank of India (RBI) suggests that more than half of such remittances are utilised for family maintenance, 20 percent as bank deposits and 7 percent for securing land, property, securities etc. 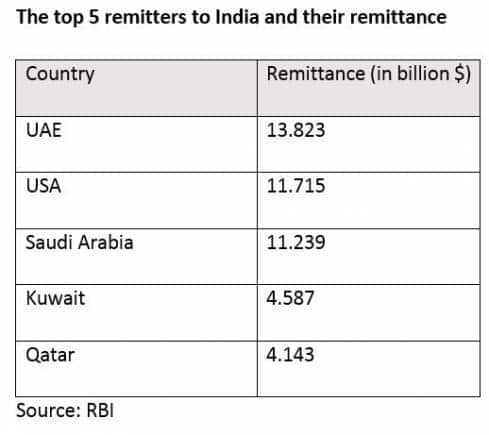 The Gulf as can be seen, together contribute more than half of the remittance to the country. India experienced a surge in the flow of remittance after the liberalisation policy of 1991. This accelerated the integration of India into the world economy opening up vibrant opportunities and jobs abroad. The new economic policy coupled with the establishment of the market exchange rate in 1993, reduced the appeal of sending money through hawala networks.

From this point, private transfers and remittances became an important constituent of India’s Balance of Payments, and since the 1990’s Indians working overseas have been the world’s top remitters consistently. Until recently, remittances to India have proven to be one of the most unhinged forms of economic flows to the country.

The looming global financial crisis in light of the pandemic has already affected the world with the start of a recession. The great lockdown adding to the economic crisis at hand has stranded hundreds of thousands of migrants in more than 100 countries.

Recently the Department of Non-Resident Keralites (NoRKs) commenced an online registration for people stranded abroad due to the ban on international flights — and within days more than 340,000 people have already registered. A majority of them could be the unskilled and semi-skilled workers who will be rendered jobless. The ‘great homecoming’ of these migrants will adversely affect the economy as unemployment will increase and the economically vulnerable will be pushed into poverty.

World Bank President David Malpass has stated that the recession will take a severe toll the ability of migrants to send money home and the remittance to India will witness a sharp decline of 23 percent to $64 billion this year. Economies dependent on remittances, such as Kerala, will have to face a huge drought in its income as many migrants are waiting to return home. The migrants within India might face a larger unemployment crisis as they will be going back to their home states. Adding to this will be the pessimism and uncertainty that is expected to loom over the market for quite some time.

An Opportunity At Hand

The most important task at hand is to handle the reverse migration into India. The returnee migrants will be more skilled in terms of their work experience abroad and, therefore, harnessing their potential can prove to be beneficial for the economy.

Along with registering them upon arriving in India, these websites/portals can be equipped for profiling them and reviewing their skillsets. The government and the private sector can use this portal to mobilise potential job opportunities for the returnees.

The central and state governments can help these returnees by forming self-help groups which will help in finding jobs and pooling resources. Such SHGs can be boosted to start small scale businesses and enterprises of their choice.

In order to recover, the government must invest in projects that create more employment, such as an expansionary fiscal policy with increased government spending. Demand revival will be yet another crucial step in this process and for the demand to be improved, people should have sufficient disposable income. Thus, easing the tax liabilities, providing unemployment allowance for poor labourers, strengthening policies such as MGNREGA, providing moratorium for repayment of loans and lending to MSME’s will be vital to rejuvenate the economy.

The history of migration and remittance to India is taking a huge turn here. The repercussions and after-effects of this economic pandemic can have a huge toll on millions of lives unless there is quick and effective action from both the people and the governments.

Nila Nair is an economics graduate and research intern at the Centre for Public Policy Research, Kochi. Views are personal.