Popular playback singer SP Balasubrahmanyam, who was fighting COVID-19 for over a month, passed away at the age of 74 on September 25. He breathed his last at around 1.04 pm at a hospital in Chennai. He is survived by his wife Savithri, daughter Pallavi and son SP Charan.

"With profound grief, we regret to inform that SP Balasubrahmanyam had passed away on September 25 at 13:04 hours. We express our heartfelt condolences to his family, friends, well-wishers and admirers at their loss during this time of anguish and sorrow," MGM Healthcare said in a statement. 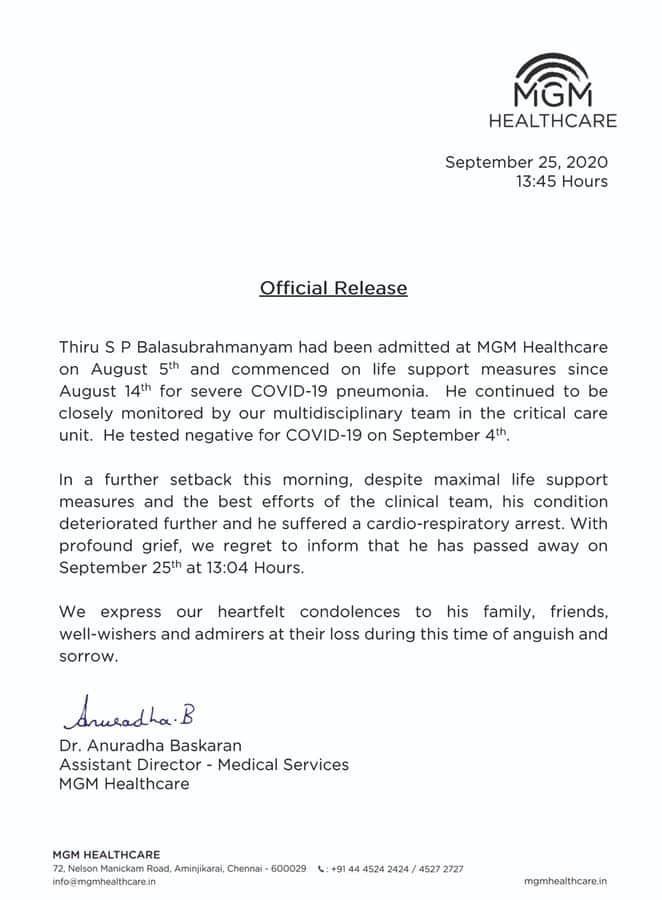 Balasubrahmanyam, popularly known as SPB was admitted to the MGM Healthcare on August 5 after testing positive for COVID-19.

He was put on ECMO (extracorporeal membrane oxygenation) and other life support measures after his condition deteriorated.

In a statement issued on September 24, Assistant Director (Medical Services), MGM Healthcare, Dr Anuradha Baskaran said that in the last 24 hours, the condition of SPB had deteriorated further warranting maximal life support and was extremely critical.

The health condition of the singer, who was admitted to the hospital with mild symptoms, deteriorated for the first time in the late night on August 13. Considering his health condition, he was put on life support and moved to the Intensive Care Unit.

On August 19, he was put on ECMO besides ventilator.

When SPB remained critical, people from all walks of life, including celebrities and the general public, came together to pray for his early recovery.

Towards the end of August, he underwent passive physiotherapy and later "actively participated in physiotherapy" and he was fully awake and responsive during that phase.

A multi-disciplinary team, comprising specialists from internal medicine, pulmonology and infectious diseases among others, took care of him. Also, the team actively collaborated with international experts from reputed centres in the United States and the United Kingdom that saw a slew of COVID-19 patients requiring ECMO support.

On September 3, the hospital had said that he was stable, conscious, responsive and continued to show clinical progress and days later it said his condition warranted an extended stay in the ICU requiring ECMO and ventilator support.

Balasubrahmanyam, who has to his credit over 40,000 songs, has sung in languages including Tamil, Telugu, Kannada, Malayalam and Hindi.

During admission, he had symptoms of cold and intermittent fever for a couple of days and had even posted a video in which he sounded confident.
Moneycontrol News
TAGS: #coronavirus #India
first published: Sep 25, 2020 01:26 pm