An analysis of constituency-wise data from the 2014 general election shows that the BJP may lose as many as 37 Lok Sabha seats in Uttar Pradesh should the SP+BSP+RLD combine in 2019, leaving only 36 seat with the National Democratic Alliance (NDA).

It's often said — in politics, there are no permanent friends or foes, only permanent interests. On January 12, once arch-rivals Akhilesh Yadav-led Samajwadi Party (SP) and Mayawati's Bahujan Samaj Party (BSP) is likely to announce its seat-sharing pact for the upcoming Lok Sabha polls.

The move assumes significance as Uttar Pradesh sends the largest number of MPs to Parliament. They may also leave a few seats to accommodate smaller parties like Rashtriya Lok Dal (RLD) and Nishad Party.

The alliance has the ability to inflict damage on the chances of the ruling Bharatiya Janata Party (BJP) in 2019. This is evident from Prime Minister Narendra Modi’s speech at Agra on January 9, while launching projects worth Rs 2,980 crore. He indirectly attacked both parties, saying, “Political rivals who did not even like to look at each other are now coming together just to oppose us."

Why an alliance is imperative

Riding on the Modi wave since assuming power after the 2014 general election, BJP, in alliance with its partners, went on to wrest Haryana, Jharkhand, Andhra Pradesh, Maharashtra and Jammu and Kashmir only to be outdone by the Nitish Kumar led-grand alliance in Bihar. It then went on to win Uttar Pradesh, Assam, Goa, Manipur and Uttarakhand. The meteoric rise of BJP across India threatened the survival of regional parties.

An analysis of constituency-wise data from the 2014 general election shows that the BJP may lose as many as 37 Lok Sabha seats in Uttar Pradesh should the SP+BSP+RLD come together in 2019, leaving only 36 seats with the National Democratic Alliance (NDA). 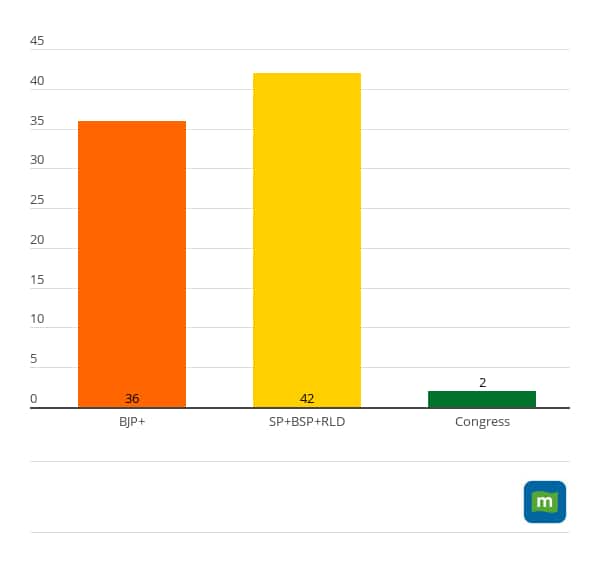 In terms of vote share, BJP and its allies secured 43.3 percent votes in 2014, whereas BSP+SP+RLD together bagged 42.65 percent. Last year’s bypoll results in the state also boosted the alliance’s hopes that they can wrest a significant number of seats from the BJP after winning Gorakhpur, Phulpur and Kairana seats.

Tacit understanding with the Congress

The alliance expects to secure majority of the Dalit-backward caste-Muslim votes by keeping Congress out of the coalition and making sure that the BJP does not make it a Us-Vs-Them election. They also hope the Congress may eat into the BJP’s vote share by garnering upper caste and Brahmin votes. Historically, upper castes and Banias have supported the BJP while some upper castes and Brahmins have favoured the Grand Old Party of India.