A fitness plan drawn up by trained coaches, to help you go from the couch to 10K in just eight weeks. For intermediate runners who want to up their game, scroll down to the second plan by Gagan Arora.

With most outdoor activities - sports, travel and socializing - suspended, and the world waking up to the work from home life since last March, fitness has been our one legit reason to step out of our homes.

According to a multi-university study published as a part of the research topic “Coronavirus Disease (COVID-19): Psychological and Behavioral Consequences of Confinement on Physical Activity, Sedentarism, and Rehabilitation,” about two-thirds of those who never or rarely exercised before a lockdown might adopt an exercise behaviour or increase their exercise frequency under similar lockdown conditions. Many, the study found, took to exercise to fill their idle time.

If you have been wanting to take up running during this time, then now is a good time to take advantage of the cooler weather that the monsoons promise to bring, and set yourself a target of completing your first 10km run.

It may sound daunting. After all, we are used to taking a cab or car to travel from Vasant Vihar to the Delhi airport, Andheri to Bandra in Mumbai, Velacherry to Anna Nagar in Chennai or Indiranagar to Brookefield in Bengaluru — all roughly 10km apart.

But this feeling is normal. Even seasoned runners like Boston Marathon finisher Shailja Singh Sridhar, 41, was not sure what it would be like when she ran her first 10km run. “For anyone new to running, completing 10km is no small feat,” said Singh Sridhar of Bengaluru.

Mumbai-based business development manager Radhika Kaushik, 40, who ran her first 10km race in 2016, said: “I had never run after finishing school, and 10km felt like a huge distance, definitely not meant to be covered on foot.”

After signing up for the race, Kaushik tried to begin training with three-four months to spare, but work, family, commitments kept getting in the way. “I wanted to train for 12-16 weeks for the race but I never penciled in training in my calendar and so it never happened,” said Kaushik, who still feels 10km is tough but not at all impossible.

Finally, Kaushik trained for four weeks before the race. She was nervous when she showed up for the race after her truncated but intense four-week training. “It was all about starting the run. With every step, the nervousness dissipated and I became more comfortable. I had covered more than 7km using a carefully planned run-walk strategy without even realising it. But the final couple of kilometres were tough,” recalled Kaushik, who finished her maiden 10km race that day in 83 minutes.

For experienced runners like Singh Sridhar, and also intermediate runners who have already completed 10km and longer distances such as half and full marathons, the aim is usually to improve and have stronger runs with better times. Because their goals, base training and endurance levels are different, their training plans are also different. Given that they want to run longer and faster, their 10km training plan is a lot more intense compared to a couch to 10km plan for newbies. “When I wanted to improve my speed and get better timings, my coach started including strength-training components at least twice a week. He told me that I needed to have the strength in my muscles to be able to run at higher speeds and greater intensity,” Singh Sridhar said.

Moneycontrol got two coaches to put together an eight-week training programme for beginners and intermediary runners. This article brings you the first two weeks’ plan.

It is normal to have butterflies in the tummy when you get a training plan or sign up for a race. “Don’t fret,” advises Dharmendra Kumar, running coach and co-founder, Protons Sports and Fitness Private Limited. “Many have done it before you and you can do it too. Don’t overthink it,” he says. Just do it. Enjoy it. 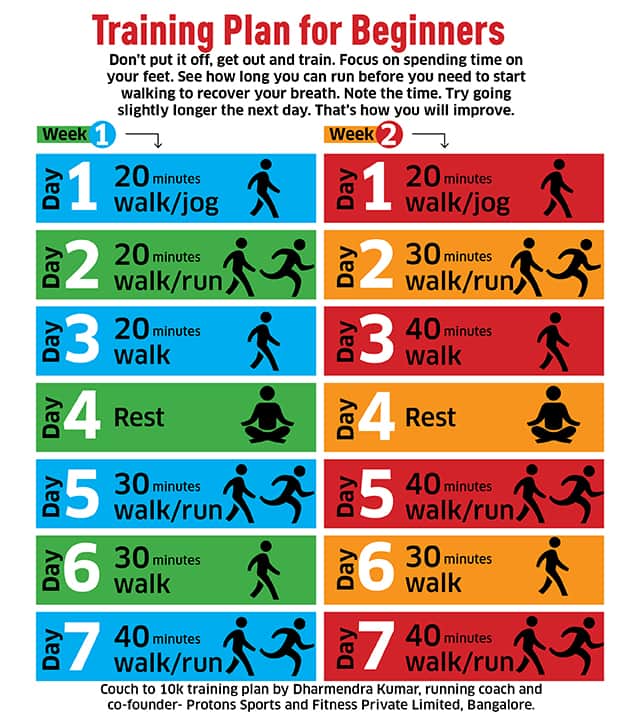 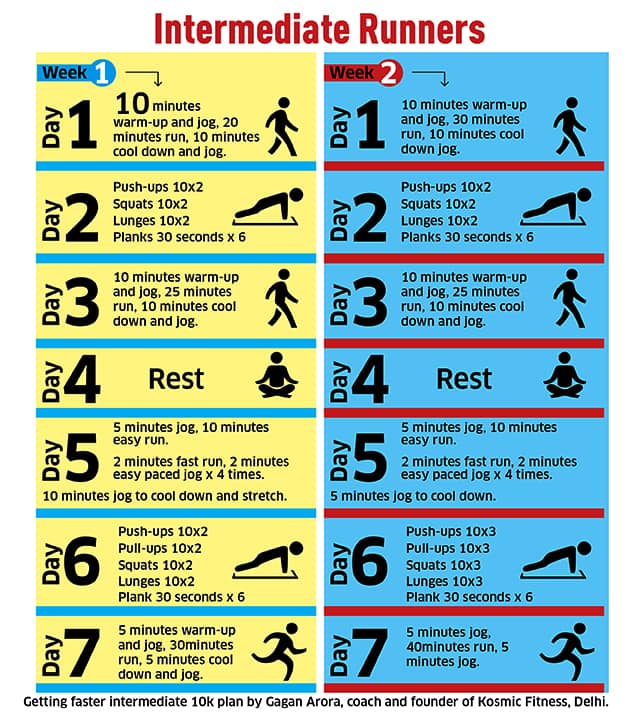 Part 2 in this series coming up over the weekend.
Shrenik Avlani is an editor, writer and journalist, and co-author of The ShivFit Way, a book on functional fitness.
Tags: #10K run #fitness #Health #running #weekend reads #workout
first published: Jun 28, 2021 07:46 am