Whirlpool or IFB: Which stock should you pick?

Given the heady valuations of both stocks, use the current market volatility to accumulate on dips

In 2017, India’s long-term consumption theme showed no signs of slowing down even though Goods & Service Tax-induced disruptions took a toll on the country’s economic activity for a while. Discretionary spending, which seems to be gaining traction in recent years, has favoured white good and electronic item manufacturers and retailers considerably.

In this context, we analysed the FY18 earnings of Whirlpool and IFB Industries, two of India’s largest multi-category consumer durable companies. Given the heady valuations of both stocks, use the current market volatility to accumulate on dips. 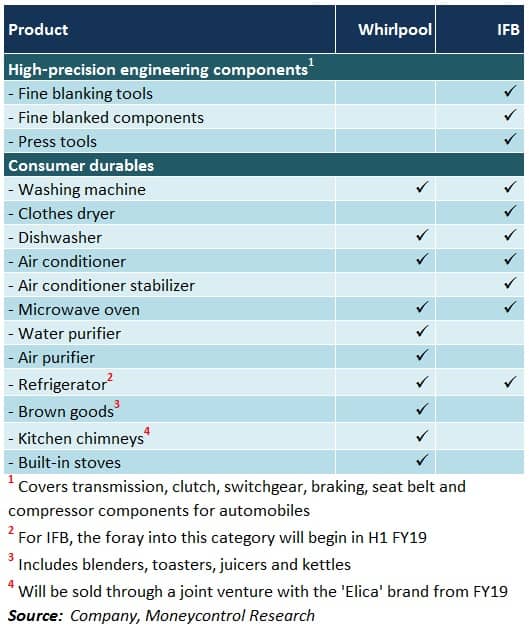 Economies of operations through higher asset turn and cost rationalisation will be pivotal to margin accretion. A low working capital cycle, ability to generate robust cash flows every year, and higher other income (through investments of surplus funds) are likely to reduce the company’s dependence on borrowings even further. Collectively, these should bolster profitability.

IFB registered strong revenue traction across its 3 segments. From a segmental perspective, margin uptick was due to improved sales mix, value engineering initiatives and product indigenisation. Owing to rising input costs and a high tax rate, a corresponding expansion in operating/bottom-line margins, respectively, couldn’t be achieved.

Demand pick-up in home appliances will play a key role in IFB’s bid to achieve its targeted 20 percent top-line compounded annual growth rate (CAGR) over the next 3 fiscals. Addition of new products in stores directly serviced by the company, coupled with an increase in indirectly serviced (by distributors and wholesalers) retail outlets by 3,500 each year, should help the company boost its turnover too.

To prevent margins from compressing, the management announced a 4 percent price hike in June. Impetus will be laid on getting rid of loss-making IFB Centres as well. Domestic sourcing of electronic components in front-load washing machines (one of IFB’s most profitable products), which stands at 50 percent at present, is likely to conclude by Q2 FY19, leading to margin growth.

Which stock should you pick?

Notwithstanding the measures undertaken by Whirlpool and IFB to make their presence felt in the minds of the consumers and shareholders, neither is immune to a few challenges that characterise India’s white goods industry. These include lack of brand loyalty, difficulties in passing on raw material price spikes, stiff competition, fluctuations in dealer margins, and changes in trade settlement terms.

Both companies are well-placed to take advantage of the growth opportunities in India’s secular and fast-growing consumer durables space. In spite of the bearish environment at the bourses, Whirlpool withstood the odds and trades pretty close to its 52-week high. IFB, even after witnessing a sharp downfall of 18 percent from its 52-week peak, captures the positives pretty comprehensively.

Unsurprisingly, at 36/33 times FY20 projected earnings, Whirlpool/IFB are steeply priced for now. Therefore, investors may consider going long on corrections in both cases.