Tiger Global's aggression and the 5 stages of startup grief

Tiger Global's deal-making spree has shocked and surprised top VC firms and entrepreneurs alike. But the initial shock has given way to cold hard logic. Tiger's $1.4 billion in Indian startups this year is a record but how will its strategy of aggressive valuations for unproven companies pan out? The answer may not be what you expect.

Some funds have held internal meetings where Tiger’s strategy, or seemingly the lack of one- has dominated discussions.

Denial, anger, bargaining, depression and finally acceptance are the five leading emotions when we deal with loss. Each of them bog us down, push, pull, motivate and shape us. But these stages of grief, defined by Swiss American psychiatrist Elisabeth Kübler-Ross in 1969 found a new, strange parallel recently.

Venture capitalists, private equity funds and late stage technology funds who have either lost deals to Tiger Global Management, or are simply trying to understand its strategy have seen their emotions shift in a similar trajectory the last six months.

In February 2021, the New York-based investment firm led a $100 million round in construction materials marketplace Infra.Market, valuing it at a billion dollars. It was a hotly contested deal, and not a single new investor could come in,because Tiger was sitting perched in Infra.Market since its Series A round in 2019, and simply doubled down on its bet. The valuation surprised many investors. Other investors eyeing the deal had pegged a valuation of $700 million internally, and that was their upper range. “I really wanted to do the deal, but at not more than $500 million (valuation). No way I’m investing at a billion (dollars)” said a partner at a global technology fund, requesting anonymity.

In July, Moneycontrol exclusively reported that Tiger is investing another $125 million, this time at a valuation of $2.6 billion. By now, the deal was almost passé. Investors, founders and bankers close to the firm say it is “just another Tiger deal,”. In the intervening four months, the startup and venture ecosystem in India has gone through the stages resembling grief- first dismissing it (Tiger’s momentum) as crazy, then growing intrigued by it, then rethinking their own strategies in light of Tiger’s dealmaking spree, and finally settling in for the new normal.

Some funds have held internal meetings where Tiger’s strategy, or seemingly the lack of one- has dominated discussions. These funds have discussed Tiger’s strategy with their own backers- Limited Partners (LPs) and how it would affect their fundraising and investments.

No one can replicate a $10 billion fund’s strategy. This strategy, however, is upending startup investing as we know it, and its consequences, similar to SoftBank’s rise, fall and rise again, will play out in the next few years.

Tiger did not respond to a detailed query from Moneycontrol.

Tiger has invested in 28 Indian internet companies this year, deploying over $1.4 billion, across stages, from Series A to pre-IPO rounds, as per data from Venture Intelligence. Tiger seems to have something for everyone. That something is called valuation. 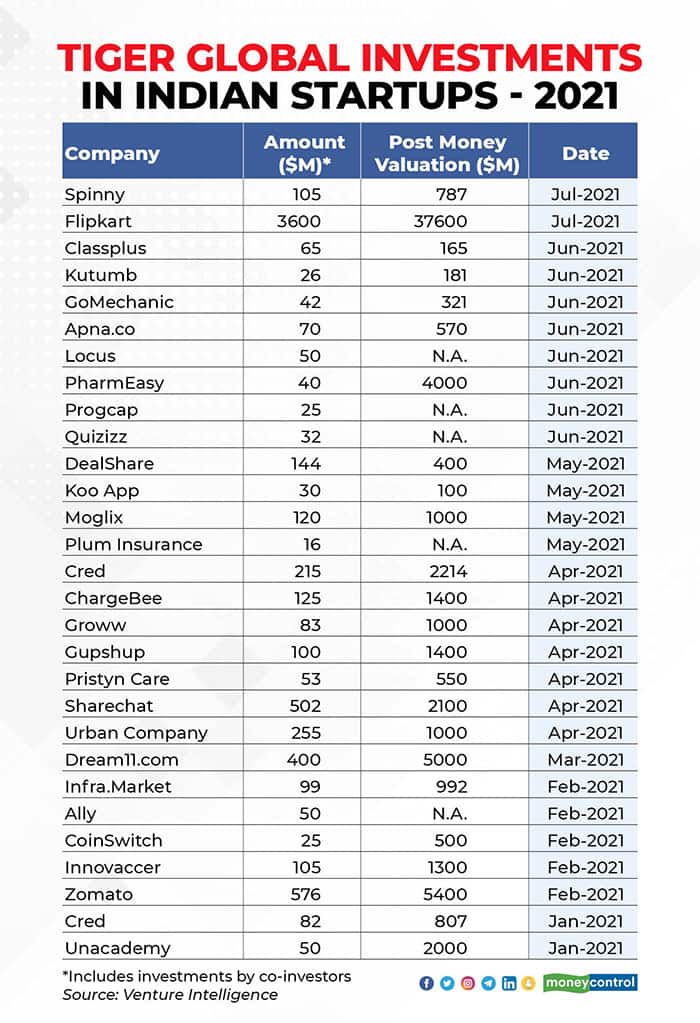 The examples are dime-a-dozen but one stands out. When investing app Groww was raising funds earlier this year, investors were offering it a valuation of about $500 million, doubling in six months. Tiger could have offered a valuation of $600-700 million and won the deal. It invested $83 million at billion dollar valuation, catapulting Groww to unicorn status- private firms valued at a billion dollars or more. This, with Groww’s revenue still being miles behind its valuation and not having seen how a bear market will affect retail investing trends.

“Tiger is playing a game at a different level. A few hundred million more in valuation, for one deal out of 100, for $100 million in a $10 billion fund, simply doesn’t matter,” said a person who has worked with Tiger on deals. “They want to get into all the best startup deals in India. Everything else is negotiable,” this person adds.

Tiger has been a key startup investor in India for at least the last decade. Lee Fixel, its erstwhile head honcho was known to close deals in a few phone calls, back founders to the hilt, and is a big reason for Flipkart’s growth and success- India’s new economy startup pioneer. Fixel, however, left the firm in 2019, to start his own firm- Addition.

Scott Shleifer, who has been leading the firm ever since, invests even faster than Fixel, founders say. “Shleifer avoids getting bogged down in details and can turn on a salesman’s charm to close deals...Shleifer looks at “how the world fits into something—he puts the overall thesis on top of stuff,” says a report from The Information.

Compared to Fixel, Shleifer seems to have a more macro approach, and although he comes well-prepared to meetings with founders, he is not as entrenched as Fixel was with Flipkart, or to a lesser extent, Ola. Fixel virtually bet his entire career on the online retailer, and fortunately it paid off. Even though Shleifer’s Tiger may invest more in India than Fixel’s Tiger did, Shleifer decidedly broad-bases his bets, said people who have spoken to him. 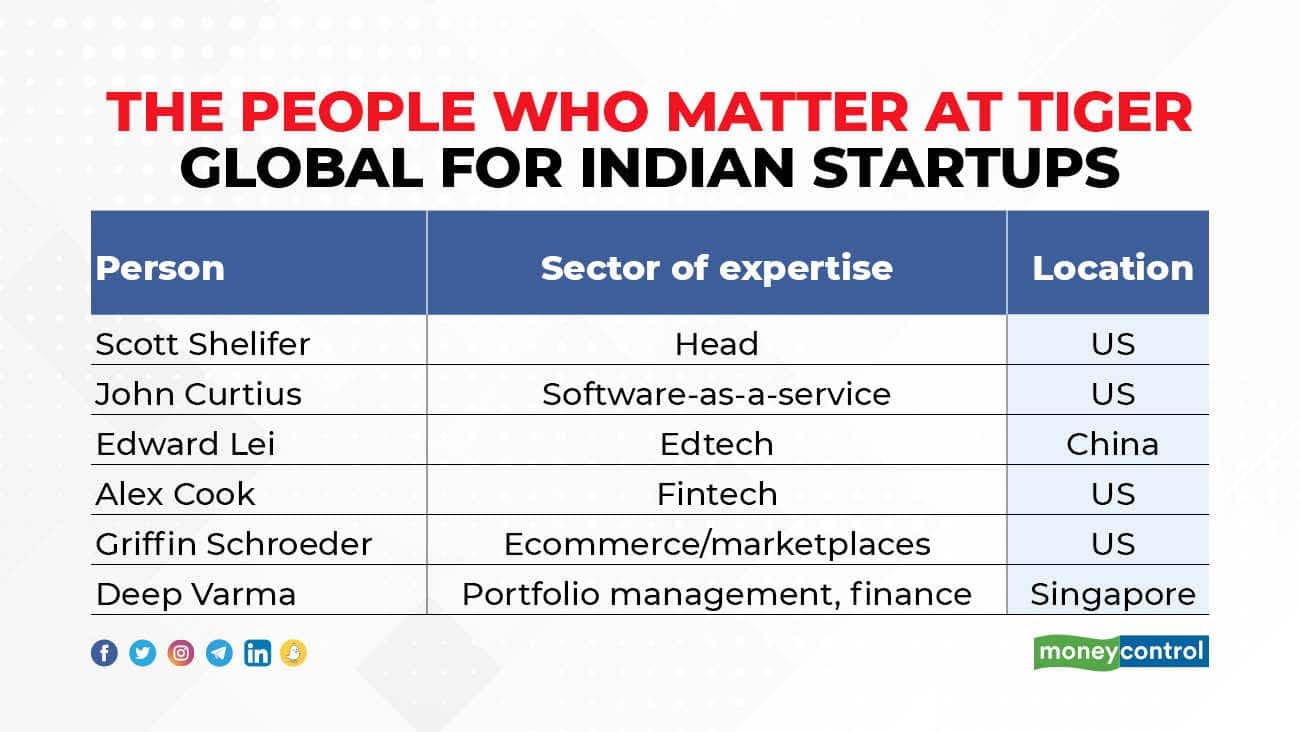 Tiger’s dealmaking frenzy has taken the venture industry by storm. Because of its multi-stage strategy, Tiger can be a friend and a threat to a VC at the same time. It has given early stage VCs attractive markups on their investments that arguably no other investor would, but it has also beaten VCs to deals, and invested in companies when VCs have told founders that they are better off not fundraising at that moment.

One partner at a $300 million venture firm recently advised a founder in his portfolio that he shouldn’t raise money from anyone, especially not Tiger, because its attractive valuation terms are a double edged sword.

“You will get the valuation of your dreams, and which no other investor will give. The pressure is on you to justify that valuation. If you don’t raise money now and focus on the business, you can raise next year once your metrics are better proven,” the investor told the founder. The founder raised about $20-25 million from Tiger anyway, confident of his execution capabilities.

But Tiger’s famed speed, large cheques and aggressive valuations should not be seen as signs of an investor who doesn’t know what it's doing. Far from it. This strategy, in various forms, has proven itself over and over again.

“They come in having done a lot of research and have a strong thesis. So you don’t have to spend time educating them, which is great,” says Abhishek Poddar, co-founder and CEO of Plum Insurance, a one-year-old startup which raised a $16.5 million Series A round led by Tiger in May.

“They have a lot of conviction, which is why they can move fast,” he adds.

Tiger does extensive research on the sectors it invests in, builds a thesis, does background checks on founders and only then has the first conversation with a founder, people who worked with the firm say. It regularly works with management consultancy giant Bain and Co., which conducts due diligence on behalf of Tiger, and works with its portfolio companies after investment to help analyse new markets, study competition and configure internal strategy. It’s like having an on-demand chief of strategy, something many early startups typically cannot afford, said one early stage founder, requesting anonymity.

Tiger does not invest in every space either, although it may not seem that way. For example, it is yet to back a lending marketplace startup in India. As of last year, Shleifer was not convinced that Indian startups can lend profitably without needing a license, and if they do get a license, whether these firms have technology that will set them apart from the hoi-polloi of lenders in India, said two people who have spoken to Shleifer on the subject. They did not want to be named.

Tiger is betting on a market, and not always on a company. Its bets are on the India education market, cloud software market or social media market first, and on a specific company second, if at all.

Not all of Tiger’s high-flying bets will work. They never do. But they don’t need to. From its 2015 deals, ecommerce firm ShopClues, accommodation platform Zostel and classifieds portal Quikr among others did not work out. But, Flipkart, software firm Freshworks, payments firm Razorpay and ride hailing firm Ola did. Tiger made $4 billion on a $1.5 billion investment in Flipkart, at a time when investors struggled for exits far more than right now. Freshworks- which Tiger entered at $500 million, is eyeing a public offering at $10 billion, while Razorpay is currently valued at $3 billion.

Similarly in 2019, Tiger invested in a dozen business-to-business and software startups. From that cohort, Zenoti and Chargebee- both unicorns- may end up overshadowing whatever happens to the rest of that cohort.

Early stage VCs are gradually making their peace with Tiger’s ins and outs, its inconsistent but always impactful dealmaking and where that leaves the industry.

Tiger’s investments are also astonishing at first look because they are viewed from a traditional venture capital lens, which work on very specific models planned for very specific outcomes (with inherent risk factored in). Tiger seems to be investing with the DNA of a stock market investor, but the risk-taking ability of a VC.

It isn’t too fussed on price (valuations), is happy to stay invested even after companies go public, and most importantly, is rather detached from company fortunes compared to typical VCs- who often fancy themselves as operators and consider their operational inputs a key part of what they bring to a startup.

“Tiger is very clear that funding this round doesn’t mean they will fund your next round. VCs and PEs often promise companies that they will back you even in your hard times, and that is what makes them a partner, not just an investor. Tiger makes no such promises,” said an investor who has worked with the firm. He did not want to be named.

The public market lens to private investing could have an interesting endgame- a listed exchange traded fund- consisting of stocks across various technology sub-sectors.

“Apart from picking winners, they are picking spaces. They can spin it out and also list it as an ETF someday. To some global pools of capital, it could be appealing,” he adds.

Tiger is trying to change the rules of the game, or play an entirely different game, depending on how you look at it. The last time an investor tried this, Masayoshi Son-led SoftBank raised a record $100 billion Vision Fund. It seemed to misfire with WeWork’s IPO downfall and Uber’s tepid listing, but Coupang’s bumper listing and other deals have SoftBank cheering once again.

Investors often compare the current funding boom to 2015, the first real startup funding boom India saw. Tiger and SoftBank were the big players then too. What is different is that India’s internet user-base has expanded, entrepreneurs are more experienced and investors have seen more boom-and-bust cycles.

At current pace, Tiger is raising $3-6 billion every year for public and private investments, leaning more towards private technology deals. Investors say that in six months or so, its India dealmaking mania should slow down. Where individual companies will stand then, and how many of them can still justify the rich valuations may determine the success of Tiger’s strategy and the viability of this style of deal-making