Summer schedule of airlines: Despite COVID restrictions, more airports to get busy

Sunday marked the beginning of the Northern Summer Schedule 2021 -- the longer of the two IATA schedules. In India, 108 airports will become active if all operations start as planned. Puducherry, Nanded and Bhatinda lose connectivity this season.

The month of March has not been kind. The second wave of COVID-19 has subdued travel sentiments and while the number of departures is more than those in February, passengers are not growing in proportion, landing a double whammy for airlines.

Sunday marked the beginning of the Northern Summer Schedule 2021 -- the longer of the two IATA schedules. This summer, the economy and the people as well as airlines are relatively upbeat. Most of the world, including India, was in a lockdown when the Northern Summer 2020 schedule started.

Data released by the Directorate General of Civil Aviation (DGCA) shows that 108 airports will be operational across the country in the Summer Schedule. Ten airlines have seen their schedule being approved.

The highs and lows

IndiGo – the country’s largest carrier by fleet and domestic market share -- has its schedule approved for 66 destinations in the country. Interestingly, the airline has not sought approval for flights to Jabalpur, making it the first station in history to be dropped! The airline is slated to start operations to Darbhanga -- one of the seven stations it had announced early this year.

Close on the heels of IndiGo is Air India and its subsidiary Alliance Air -- both operating to 54 destinations. The much smaller Alliance Air, which is an all-ATR operator, has traditionally been an RCS - UDAN operator. However, the summer schedule sees the airline venture beyond its comfort zone of RCS-UDAN and operate many commercial sectors, which see competition from multiple other players.

Air India continues to have a smaller schedule as it continues to focus on the next phase of Vande Bharat Mission (VBM), where it is the only operator on many routes!

The Mumbai-headquartered GoAir is seeing a sudden jump in approved destinations, taking the count to 35. Some of these destinations, like Surat and Shirdi, are expected to come up in May.

Also, destinations not starting immediately in the North East for Flybig -- the Indore-based regional carrier that started operations in December 2020. The airline will operate to Rupsi, Tezu and Pasighat, among others. While there are constraints at a few airports, Flybig is yet to induct additional aircraft into its fleet.

SpiceJet is scheduled to fly to 48 destinations, and Vistara and AirAsia India 28 and 20, respectively.

These destinations also include certain routes which operate as military charter and are not open for commercial passengers. The New Delhi -- Thoise (Jammu and Kashmir) route by Air India or routes to Port Blair by AirAsia India fall under this category. While they add a destination to the airline’s approved schedule network, a common man won’t be able to buy a ticket and fly. 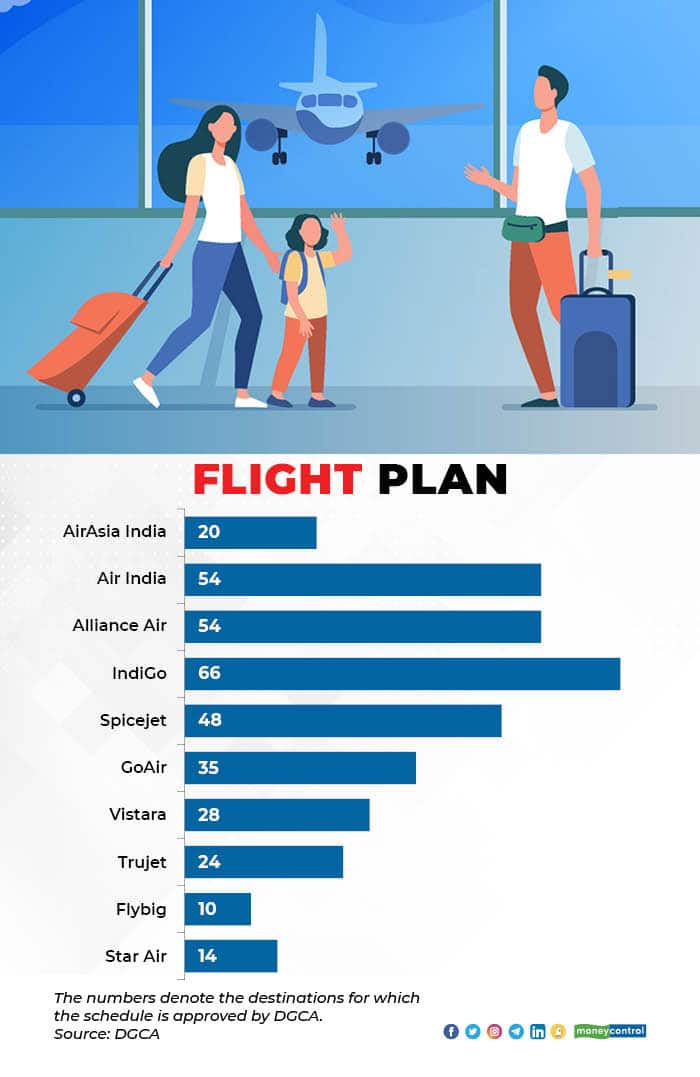 Where do states stand?

At nine, Gujarat has the maximum operational airports -- Ahmedabad, Bhavnagar, Bhuj, Jamnagar, Kandla, Porbandar, Rajkot, Surat and Vadodara. Keshod is set to become the tenth. The airport received its licence on March 17 and TruJet is slated to fly to Keshod from Ahmedabad.

The last season was full of rules and restrictions. As we head into summer, one can only hope that the next wave of COVID-19 is in control, vaccinations pace up, and a recovery is in sight for the airline industry.

With a cap still in place, airlines have expanded far and wide - with over 10 operational airports compared with the Winter schedule, but they are yet to recover on every other parameter.