With this investment, Grofers will turn a unicorn, a term used to describe privately funded technology startups that have a valuation of a billion dollar and above.

IPO-bound food delivery platform Zomato has signed off on its long-held plan to invest in online grocery startup Grofers, according to sources privy to the development. The deal comes at a time when more consumers are buying groceries online, owing to the COVID-19 pandemic.

Sources told Moneycontrol that the deal has officially been signed on June 29 2021, as part of which Zomato and existing investor Tiger Global will invest around $120 million in the grocery startup at a valuation of over one billion dollars. Tiger will be investing a small amount. With this investment, Grofers will turn a unicorn, a term used to describe privately funded technology startups that have a valuation of a billion dollar and above. Moneycontrol reported on June 18 that Zomato & Grofers were pressing ahead with the deal and that an announcement was imminent

Interestingly, Grofers co-founder Saurabh Kumar announced on June 18, 2021 that he will be leaving the startup, eight years after building it with founder and CEO Albinder Dhindsa. Though he is giving up his operational roles in the company, he will remain a shareholder on the board.

He and Albinder together own less than 8 percent in a startup, with the majority currently held by SoftBank. Other investors include Tiger Global, Sequoia Capital, and DST Global.  Sequoia is also an early investor in Zomato.

In response to queries from Moneycontrol, a Grofers spokesperson said, "We don't comment on speculation. Our focus at present is to do our best to serve consumers at this time of the country's need; while we continue to build technology that empowers the grocery ecosystem to make products more affordable and accessible for millions of Indian households."

This is not the first time Zomato and Grofers have tried to forge a deal. Last year, they were in talks for an all-stock merger that fell through. They started talking again this year, at a time when the online grocery space is seeing a lot of growth. 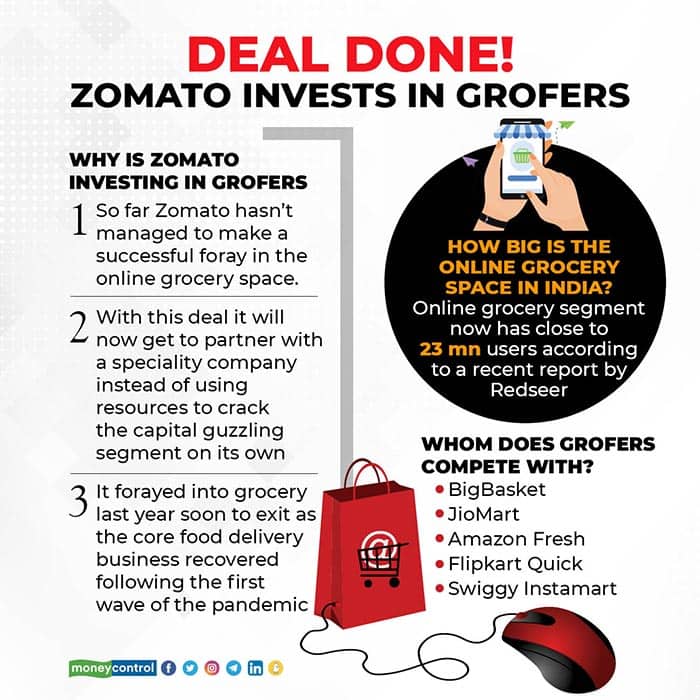 While Zomato has been focused on the food delivery segment, its arch-rival Swiggy is betting big on its hyperlocal delivery service Swiggy Genie, where it competes with Dunzo, Flipkart. Amazon and its online grocery service Swiggy Instamart, where it's up against players such as Flipkart, Amazon, BigBasket, JioMart, and Grofers.

Grofers was founded in 2014 by Dhindsa and SK- as he is known by company insiders and friends and was among a bunch of hyperlocal startups at the time. Most of them, including PepperTap and LocalBanya, shut down after the 2015 funding frenzy. Grofers and Tata-owned BigBasket are the largest players in the space currently, with Swiggy's Instamart, Flipkart, and Amazon too stepping up investments here as more people turned online for their grocery needs amidst the pandemic-induced lockdowns.

Albinder & Zomato founder and CEO Deepinder Goyal also go back a long way. Both of them studied at IIT-Delhi between the years 2000-2005. He also headed Zomato's international operations for two years before starting up Grofers. Albinder's wife Aakriti Chopra, one of Zomato's early employees who currently works as Chief People Officer, was recently elevated as co-founder, in recognition of her contributions to the company.

Zomato sealed its investment in the online grocery platform, even as it awaits market regulator's Sebi's approval for its IPO. It had filed for its Draft  Draft Red Herring Prospectus (DRHP)  in late April, kicking off one of India's most anticipated internet initial public offerings (IPOs) this year.

Sources said Sebi is likely to issue its final observations in the draft offer document in the coming fortnight, a prerequisite for any company seeking to offer its shares to the public. Zomato's preliminary roadshows with investors too have got off to a good start, with its public issue evincing a lot of interest from institutional investors.

Zomato's plans to buy a minority stake in Grofers was first reported by The Economic Times in May, 2021​.