The amount realisable from Air India’s residual assets following the handover of the airline to the Tatas is unlikely to be higher than their book value, according to experts

Come December, when Air India is transferred to the Tatas, the national carrier would have burnt a hole of roughly Rs 1,57,339 crore in the government’s pocket over the past 10 years, according to valuation experts.

The estimate is based on the amount spent on the airline since 2009-10, its debt and pending liabilities that the government will take over when the transaction closes, the cash receivable from the Tatas, and the value of Air India’s residual assets that may be monetised in due course.

The Tata Group emerged successful in the divestment process of Air India with a bid of Rs 18,000 crore as the airline’s enterprise value. The Tatas will own 100 percent in Air India and its subsidiary Air India Express and 50 percent in the joint venture Air India SATS.

After the transaction closes, the government will be left with Air India’s non-core assets and Rs 46,262 crore of debt, which will be transferred to Air India Assets Holding Ltd. (AIAHL), a special purpose vehicle formed by the government to provide unified asset holding services.

Apart from stakes in the subsidiaries, AIAHL was formed to acquire Air India’s assets including paintings, artifacts and other non-operational assets, non-core assets, immovable and moveable properties, accumulated working capital loans not backed by any asset, and other assets/liabilities or of its subsidiaries, according to the SPV’s website.

The government will now look to monetise the four subsidiaries and the non-core assets of Air India, said Tuhin Kanta Pandey, secretary in the Department of Investment and Public Asset Management.

After netting off the notional value of the assets, the airline would have cost the Indian taxpayer Rs 1,57,339 crore, according to valuation experts.

However, the experts said the government will find it difficult to generate substantial value from the sale of Air India’s subsidiaries and may even need to hold on to them to sustain Alliance Air’s operations.

“The government will need to keep running AIATSL, AIESL and Alliance Air as they majorly cater to the regional routes under the UDAN scheme and smaller markets in India, where interest from private players is minimum,” an aviation expert from Morgan Stanley told Moneycontrol.

The expert added that while the valuation of Air India’s subsidiaries may be about Rs 1,000 crore, it will be hard for the government to find potential buyers for them.

Lokesh Sharma, a senior aviation expert, agreed and said Air India Air Transport Services and Alliance Air have been the government’s mainstay in operationalising regional airports. Private companies may not consider investing in smaller markets where there is no major growth potential, he said.

HCI-operated Centaur Hotels in New Delhi and Srinagar have struggled to attract customers over the past few years due to their poor maintenance and high prices. Both hotels require major renovation and possibly re-branding, experts said.

The book value of Air India’s non-core assets, which include paintings, expensive accessories, buildings and land, is about Rs 14,718 crore, according to officials. However, this is a notional figure and the government may struggle to get this amount from their sale, property valuation experts told Moneycontrol.

The biggest non-core assets left with the government include land worth Rs 7,000-8,000 crore, buildings worth Rs 3,000-4,000 crore and paintings and other accessories worth Rs 2,000 crore, according to senior government officials who cited surveys carried out in 2018.

The notable assets include Air India’s hangar and maintenance facilities, residential properties, the iconic Nariman Point building in Mumbai, the Air India headquarters in New Delhi and the reservation office building at Safdarjung airport in the national capital.

The government has decided to give the Nariman Point building, the Air India headquarters and the Safdarjung office to the Tatas for two years and all of Air India’s residential apartments for six months in order to ensure a smooth transition. The government will likely look to monetise these properties once they are returned, officials said. 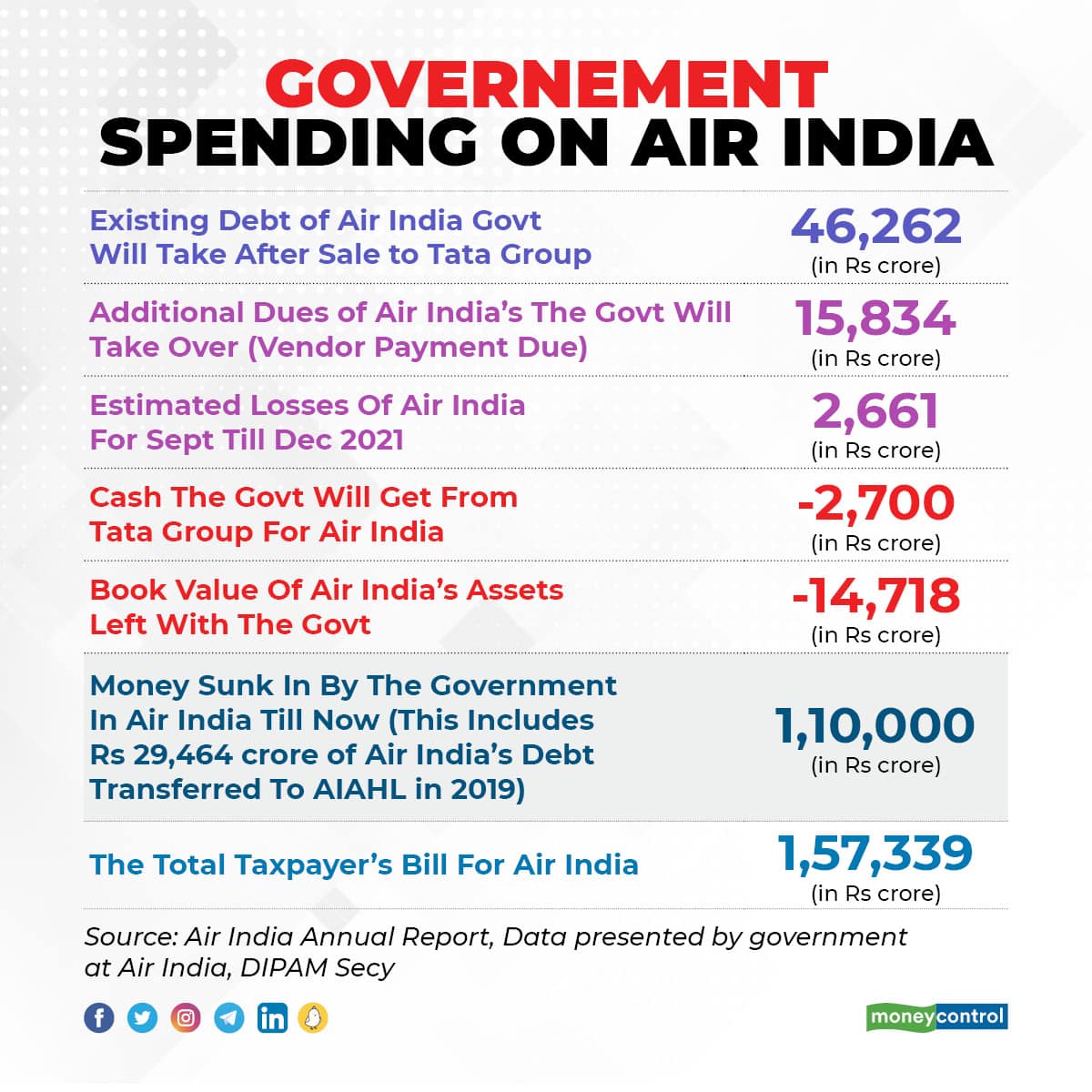 In 2018, Air India floated tenders for the sale of the building, which stands on state government land, but failed to get a good response. In August 2021, the Maharashtra government started discussions with Air India to buy the building.

In New Delhi, Air India’s commercial property located on Baba Kharak Singh Marg near Connaught Place is spread across 2.5 acres and is currently valued at about Rs 1,100 crore.

In Chennai, Air India’s Unity Complex Building spread over 3 acres with a built-up area of 1.25 lakh square feet is currently valued at about Rs 55 crore, experts said. Another property in Anna Salai at Teynampet spread across 1.5 acres could command Rs 80 crore.

Air India’s residential colony in New Delhi’s posh Vasant Vihar area is estimated to be worth about Rs 2,700 crore, valuation experts told Moneycontrol. The airline’s property at Nerul in Navi Mumbai comprising 500 flats with a built-up area of 1.3 lakh sq. ft. is valued at Rs 80 crore.

The valuation of the Vasant Vihar and Nerul properties are inclusive of land costs. Individual apartments in these colonies cannot be sold, people aware of the matter said.

So far, Air India has struggled to sell its major assets. Firstly, the ambiguity around the sale of Air India and the structure of the deal hobbled the company’s effort to sell major assets. Large-ticket buildings were held back and only the smaller residential properties were prioritised for sale. But wider gaps in valuation expectations also played spoilsport.

Since 2015, the government has listed properties worth Rs 2,000 crore for auction and managed to get only Rs 738 crore from the sale of real estate assets.

In the past three rounds of properties put up for sale, the government had to cut their valuation by 10 percent each time on account of factors such as weak market sentiment, the Covid-19 pandemic and liquidity issues.

The government should also look at leasing as an option to monetise the non-core assets of Air India, Sanjeev Sanyal, the finance ministry’s principal economic adviser, said last week.

“Those assets can be monetised in various ways. You can outright sell them where it is appropriate, you can lease them out. For infrastructure, that’s [leasing] a better thing to do because, after a period of time, you can get it back and you can then decide what to do, depending on that time, and so on. So this will bring back some more,” Sanyal had said.

Air India also has assets including paintings, carpets, ashtrays and drapes worth Rs 2,000 crore, senior government officials said. Moneycontrol could not get these assets valued independently.

As a precursor to the Air India sale, the government set up AIAHL in 2019 to hold the airline’s debt and non-core assets. Debt worth almost Rs 30,000 crore was transferred from Air India’s balance sheet to AIAHL, which the government refinanced by issuing non-convertible debentures, government fully serviced bonds and government guaranteed bonds.

Besides, as much as Rs 15,834 crore of liabilities in the form of unpaid bills to oil companies, airport operators and vendors will be transferred to AIAHL, Pandey said.

The DIPAM secretary also said that before the handover of the airline to the Tatas, any liabilities arising in the four-month period (September-December) would be transferred to AIAHL.

AIAHL may be left with a total debt of Rs 62,057 crore by the end of December, after deducting Rs 2,700 crore that the government will get from the sale of Air India to the Tata Group.

AIAHL’s total liability will be over and above Rs 1.1 lakh crore infused by the government into Air India – Rs 54,584 crore as cash support and Rs 55,692 crore as loan guarantees.

“Apart from cash support, the government also paid lenders for the loans it had guaranteed,” an official said.

Netting off the notional value of assets, which according to valuation experts are unlikely to be met, the Maharaja would have cost the Indian taxpayer Rs 1,57,339 crore.