RBI’s 15-year tenure cap: These are the CEOs who will be impacted

Among those who will be affected by the new rule, though not immediately, are Kotak Mahindra Bank’s Uday Kotak, Bandhan Bank’s Chandra Shekhar Ghosh and AU Small Finance Bank's Sanjay Agarwal. How exactly will the new rules affect their tenures? Read on to find out

The Reserve Bank of India (RBI) on Monday announced fresh rules on corporate governance in banks, as part of which the regulator capped the tenure of bank CEOs (chief executive officers) to a maximum of 15 years. Issuing the latest rules, the RBI said the post of Managing Director and CEO or WTD (whole-time director) cannot be held by the same incumbent for more than 15 years.

In the case of an MD&CEO or WTD who is also a promoter/major shareholder, the person cannot hold these posts for more than 12 years, the RBI said.

The new rules will come into effect from October 1.

Although the RBI has stipulated a 12-year cap for promoter/major shareholder CEOs, in extraordinary circumstances, at the sole discretion of the Reserve Bank, such MD&CEO or WTDs may be allowed to continue up to 15 years. The regulator will take a call on this extension looking at the level of progress and adherence to the milestones for dilution of promoters’ shareholding in the bank, the RBI said.

In announcing the fresh guidelines, the RBI has also brought in age restrictions for the MD&CEO and WTD post in private banks, stating that no person can continue beyond the age of 70. Within the overall limit of 70 years, as part of their internal policy, individual banks’ Boards are free to prescribe a lower retirement age for WTDs, including the MD&CEO, the RBI said.

Here’s a detailed look at which bankers are likely to get impacted due to the central bank’s new rules.

Uday Kotak, the Managing Director and CEO of Kotak Mahindra Bank, will be among the top bankers likely to be affected by the new RBI guidelines, though not immediately. Kotak first took over as the chief of Kotak Mahindra Bank in 2003-2004, meaning he has already completed 17 years in the post.

However, the RBI had cleared his re-appointment for three years early this year and he will be allowed to complete it.

The RBI guidelines clearly state that banks with MD&CEOs or WTDs who have already completed 12/15 years as MD&CEO or WTD, on the date these instructions come into effect, shall be allowed to complete their current term as already approved by the Reserve Bank. This means Kotak can continue in the top post till December 31, 2023.

While this means there is no immediate impact for Kotak, it is a cue from the RBI that the bank will need to think of a succession plan after the expiry of Kotak’s three-year term.

Will Kotak challenge the RBI guideline? One cannot rule out the possibility.

In 2020, Uday Kotak and the RBI fought a court battle over Kotak's promoter stakeholding in the bank. RBI norms stipulated that Kotak had to pare his promoter stake below 20 percent before December 31, 2018, from around 30 percent. 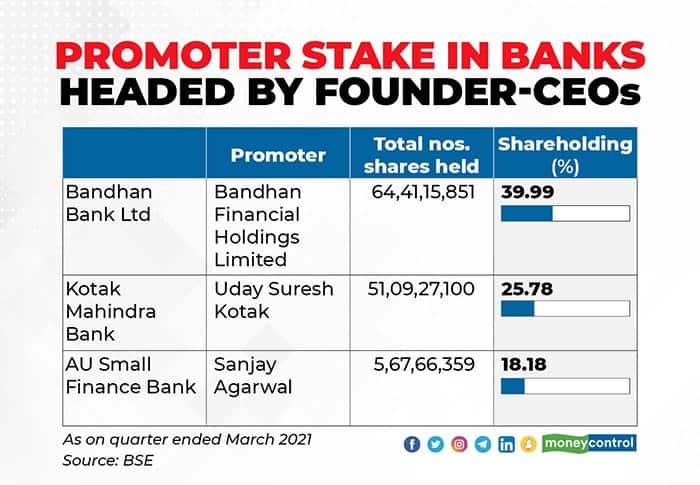 To achieve compliance, in August 2018, Kotak Bank announced the completion of a perpetual noncumulative preference share issue (PNCPS), which it interpreted as lowering the promoter stake to 19.7 percent. The bank claimed it was complying with the RBI licencing norms through this deal. But here, the RBI posed a question; the regulator said the preference share allotment route wasn’t sufficient to meet the promoter dilution requirement. The bank’s legal argument was that PNCPS was part of the paid-up capital.

With the impasse continuing and the deadline for stake dilution fast approaching, KMB decided to move the High Court of Bombay. In January last year, the RBI let KMB retain the 26 percent promoter stake with some riders. It said the promoters, Uday Kotak and family, while retaining their 26 percent stake, needed to cap the voting rights at 15 percent by April. KMB withdrew the case subsequently and some interpreted this as a win for Uday Kotak.

In June, Kotak sold 5.6 crore shares for more than Rs 6,900 crore in a block deal, reducing his stake to 26.1 percent, inching closer to the RBI’s stipulated level.

Chandra Shekhar Ghosh of Bandhan Bank is another private bank CEO who may be impacted by the RBI rules. Ghosh, a veteran in the microfinance business, received his banking licence in 2014 and the bank started operations five years ago. Going by the RBI rule of 12 years for promoter-CEOs, if the regulator treats Ghosh as a promoter CEO, he will have seven more years at the post and a possible extension of a few years if the bank manages to convince the RBI of the efforts it has made to reduce the promoter stake.

But there needs to be clarity on which category Ghosh falls under. Technically, Bandhan Financial Holdings is the promoter of the bank and not Ghosh. The bank seems to be taking this approach, judging by a statement from its spokesperson: “We wish to clarify that Mr Chandra Shekhar Ghosh, who has been the MD & CEO of Bandhan Bank for the last six years, is not the promoter of the Bank. Bandhan Bank’s principal promoter is Bandhan Financial Holdings, which has a diversified shareholding.”

If the RBI doesn’t consider Ghosh’s founder status and treats him as a non-promoter CEO, then he will have 10 more years in the CEO post.

In August 2020, Bandhan Financial Holdings, the holding company of Bandhan Bank, brought down its stake in the lender from around 61 percent to 40 percent through a block trade. The holding company sold a stake, worth around Rs 10,500 crore, in the bank. Under RBI norms, the Bandhan promoter has to reduce its stake to 40 percent in the first stage. Ghosh had then said there are two ideas behind the stake sale by Bandhan Financial Holding. First, to comply with the RBI norm, and second, to focus on future businesses. These businesses can operate like subsidiaries under the holding company.

Earlier, Bandhan was also considering merging the bank with the holding company to reduce the promoter stake and comply with RBI norms. Ghosh later said in the backdrop of the share sale by promoters that a merger may no longer be necessary. Bandhan Bank’s promoter holding was actually 82 percent before the acquisition of GRUH Finance last year.

In September 2018, the RBI imposed punitive actions on Bandhan Bank. This included withdrawing permission to open branches and freezing the remuneration of the Managing Director and CEO of the bank at the existing level until further notice. However, in February 2020, the RBI allowed the bank to open branches without its approval, with the rider that at least a quarter of the branches should be opened in unbanked rural areas within a year. This relaxation was given after the RBI noted that it was impressed with the bank’s efforts to comply with its licensing rules.

Will Ghosh get to complete his 15-year term? It is up to the regulator to decide.

Agarwal held an 18.18 per cent stake in AU Small Finance Bank at the end of the March quarter.

Srinivasan, a veteran banker who had stints across foreign banks before moving to Federal Bank, has been the CEO of the bank since 2010. Since he has completed a decade in the job, Sreenivasan can continue for five more years.

The RBI last renewed Srinivasan’s tenure in July 2020, for a year w.e.f. September 23, 2020, till September 22, 2021. Federal Bank and Srinivasan are hopeful of getting the RBI’s approval for another extension. But even then, he will have time only till 2025 at the bank.

Like Srinivasan, RBL Bank’s Vishwavir Ahuja is another bank chief who will have to step down after five years, going by the RBI rule. Ahuja, too, has completed a decade as CEO of RBL Bank. The RBI, in January 2021, re-appointed him as MD&CEO for three years till June 2024.