The big, fat Indian wedding can be insured, but only the rich go for it

Wedding insurance is a relatively untapped market and popular with mainly weddings that cost in excess of around Rs 50 lakh. It covers you against uncertainties beyond your control. But if you get second thoughts about your life partner and call the wedding off, the insurance doesn't offer any solace.

Given that it is such an important (and expensive) occasion, wedding preparations, particularly in India, rarely factor in the possibility of a cancellation.

This, despite the massive amounts at stake — couples and families often spend a fortune on their big, fat extravaganzas. Indians are expected to spend a whopping Rs 3.75 lakh crore between now and February 2023.

“One doesn’t usually think that a wedding could get cancelled. So people are wired not to take wedding insurance. Generally, it’s the professional wedding planners who persuade families to buy such covers. There are cancellation charges for many things that are part of a wedding, and this cover reimburses those losses,” says Sanjay Datta, Chief, Underwriting, Claims and Reinsurance, ICICI Lombard General Insurance.

Also read: Getting hitched? Here are 4 tips to keep your wedding within budget

Wedding insurance not popular in India

Other companies that provide this coverage include public sector insurance companies, Bajaj Allianz General Insurance, and Future Generali Insurance, among others.

“It is not popular in India as grooms, brides, and families do not want to entertain the thought that things could go wrong on one of the most important days of their lives,” says a Global Insurance Brokers spokesperson. The company has facilitated insurance covers for several big-budget weddings.

“We have seen people buying insurance cover for weddings with budgets of over Rs 50 lakh. That is because often such weddings feature international artistes. Wedding insurance promises to compensate the family in case they fail to turn up,” he adds. 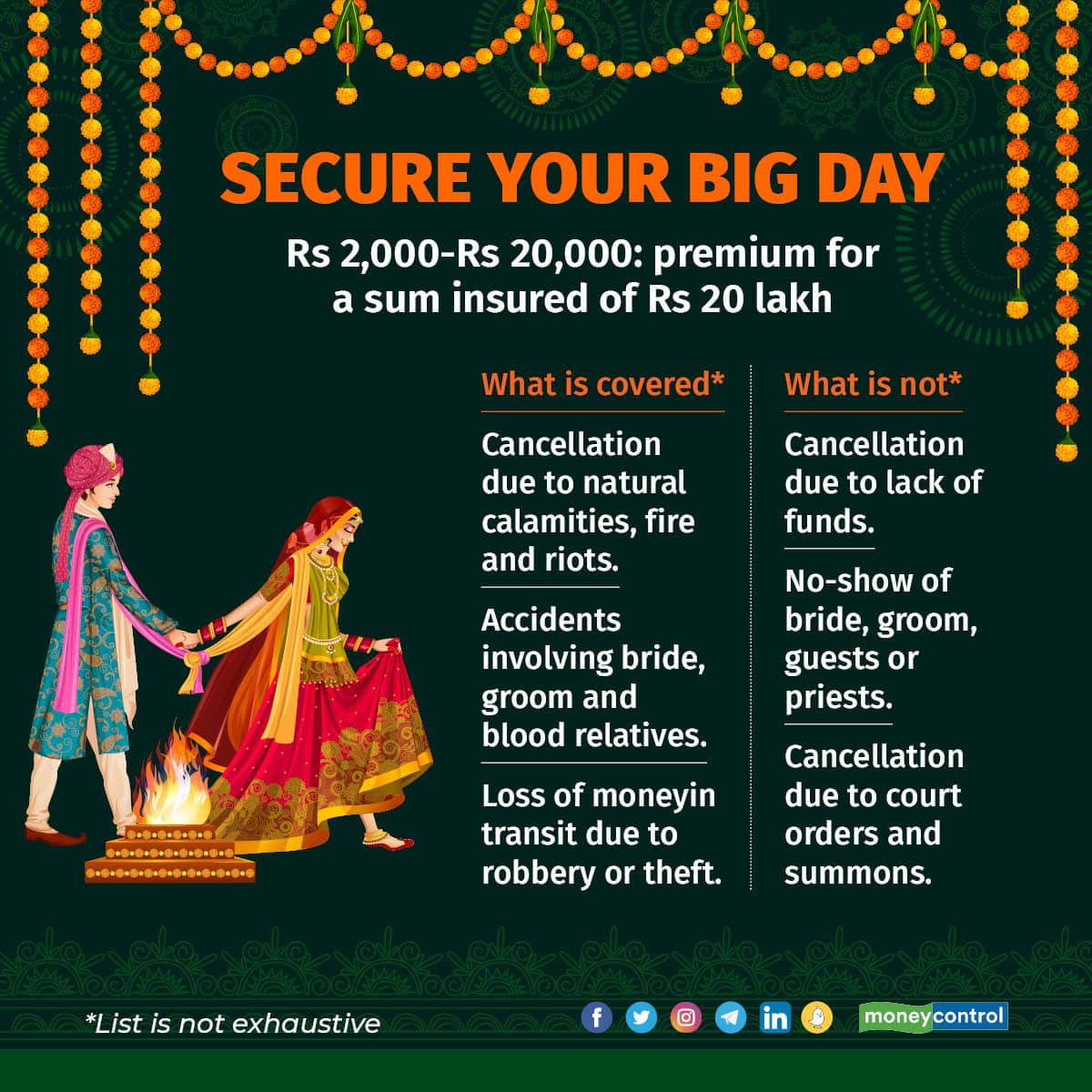 Essentially, these are event insurance policies packaged as wedding covers. “These cannot be purchased online, off the shelf,” says Datta. You have to approach the insurance company for the cover, which will then be customised per your requirements.

The location and venue also play a role. “The scale of decorations, period of celebration, and cost of valuables are some of the variables that can affect the premium. For example, if a customer buys a cover only for event cancellation (due to fire, declaration of state mourning, etc.), then our minimum premium may be Rs 2,000 plus GST for a cover of Rs 20 lakh,” he adds.

If you need coverage against cancellation due to rains, terrorism, no-show of artistes due to accidents, etc., it will entail an additional premium, as will insurance for personal accident, damage to sets, props, and other equipment due to fire, burglary, etc.

Since these are customised policies without a standard template, you will have to compare the terms of coverage of different policies in detail before taking a call.

Wedding cancelled due to a family dispute? Insurance will not help

While a long list of incidents beyond your control are covered, certain risks are not. For instance, if the wedding is cancelled due to disputes between the bride, groom, or family members, the insurer will not compensate for losses.

“Failure of the insured to commence and complete the event in the scheduled time due to the insured’s inability to take the required permissions, lack of funds, court verdicts, non-arrival of priests or guests, etc., will not be covered,” says Rao.

Preeti Kulkarni is a financial journalist with over 13 years of experience. Based in Mumbai, she covers the personal finance beat for Moneycontrol. She focusses primarily on insurance, banking, taxation and financial planning
Tags: #event insurance #general insurance #insurance #personal finance #wedding insurance
first published: Nov 28, 2022 08:38 am