The costliest component to be insured in an electric car is the battery, which accounts for 40-60 percent of the vehicle’s price

Twenty-one new electric car models are going to be rolled out in 2021. In 2020, 3,400 electric cars and 1.52 lakh electric two-wheelers were sold in India, as per data from the Society of Indian Automobile Manufacturers. With the Government announcing a vehicle scrappage policy and kickstarting electric vehicle manufacturing, their numbers could increase over the coming years. Rising fuel prices and environment protection measures have been pushing some customers towards electric vehicles.

Yet, no specially-designed insurance policies are available for electric vehicles as they constitute a small part of the total traffic pie currently. “The percentage of such vehicles is less than 1 percent as of now,” says Aditya Sharma, Head, Motor Business, Bajaj Allianz General Insurance. But unlike insurance costs in the US (21 percent higher) and UK (14 percent higher), India offers a 15 percent discount on premiums for third-party insurance cover on electric vehicles. This policy essentially covers the costs involved in damage and injuries caused to other vehicles and individuals. The discount has been mandated by the Insurance Regulatory and Development Authority of India (IRDA) since June 2019. The own-damage cover for electric car insurance has been generally higher so far in India. “Own-damage premium is similar for both electric vehicles and other fuel. Third party premium for an electric vehicle is lower by 15 percent as compared to other fuel types,” says Adarsh Agarwal, Appointed Actuary at Digit Insurance. 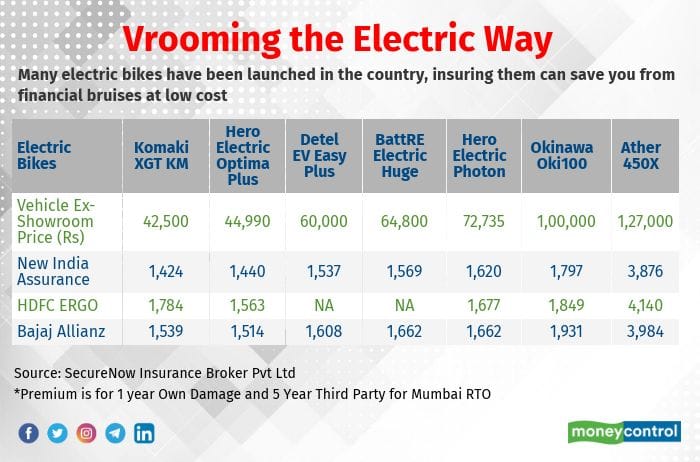 Some insurers offer a lower premium on own-damage cover – that offers protection for damage done to the policyholder’s vehicle – for electric car variants.

But there is no fixed trend so far because the EV segment is still in a nascent stage. “Electric vehicle’s own-damage premium rates are also reduced on account of low speed and lack of engine-related damage claims,” says Amitabh Jain, Head, Motor, Health Claims and underwriting at ICICI Lombard General Insurance.

Since the cost of electric cars is considerably higher compared to that of other fuel variants, insurance is also expensive. The costliest component to be insured in an electric car is the battery, which accounts for 40-60 percent of the vehicle cost.

As and when battery prices drop, vehicle and insurance costs would also reduce. But insurers have their eye on the performance of batteries and their durability as the claims amount would be skewed towards this hefty cost if it needs to be replaced.

“As of now the rating for insurance for all parts are at par with other fuel types. However, batteries are treated differently in terms of coverage, ratings etc. Fuel type is one of the rating criteria alongside multiple other factors such as geography and claim experience,” says Sharma.

A pure electric vehicle (not hybrid) comes without the engine. So there would be no case for engine oil replacement or engine damage coverage, resulting in low service and repair costs. However, battery replacement costs are high. Also, since electric cars have fewer parts, even if one small part is damaged, the functionality of the vehicle is significantly affected. Besides, only select garages offer such repair services. This pushes up the own-damage insurance cover.

Add-on covers insure specific parts of your car. Check if your insurance company offers those. Some of them are quite handy and help you reduce your out-of-pocket expenses.

Additionally, the fibre parts and glass parts would be costly to replace as both the spare parts and the labour charges for the same would be expensive. Agarwal of Digit Insurance says, “Add-ons such as a zero-depreciation cover become more important for electric vehicles, where majority of the parts are made of fibre or plastic and attract higher depreciation than metal parts.”

Edelweiss General Insurance says it is planning to introduce covers to protect damage to chargers and cables that are not part of the vehicle and are used for charging at home etc.

Though you can track an electric car remotely if it gets stolen, the battery cannot be traced. But in case of a battery theft, insurers have a clause asking the car owner to shell out a percentage of the insurance claims – also called ‘deductible.’

So, keep an eye on this clause while purchasing an insurance policy. “Customers should check for battery theft deductible that might be there in the policy where the insurer might have to pay a part of the claim in case of a battery theft,” says Agarwal.

As more EVs hit the road and companies study the damage and maintenance patterns, insurance premiums and policies will evolve. For instance, as battery costs reduce, insurance premiums may also drop. More add-on covers can also come if, as Jain of ICICI Lombard says, insurance companies identify certain parts of electric vehicles – other than the battery – that are more prone to damage.