Stick to growth plans. If you definitely need regular income, opt for a systematic withdrawal plan

It was an anti-climax. In the days leading to Budget 2020, there was a lot of talk about the possibility of abolishing dividend distribution tax (DDT). It was, however, assumed that the DDT would be abolished and dividends would be made completely tax-free. That did not happen. While finance minister Nirmala Sitharaman abolished DDT, she made dividends taxable in the hands of investors. For investors who relied heavily on dividends, this move meant added taxes. With the new proposal in place, should you now go for the dividend plan or opt for the growth option of a mutual fund?

If you have been an investor in balanced advantage funds (BAFs) and arbitrage schemes, you are likely to be impacted the most.

BAFs were sold on the premise that by juggling among equity, debt and arbitrage opportunities, their asset allocation will cushion you from volatile markets. In falling markets, fund managers would increase their debt allocation. During periods of rallies or when fund managers feel that a rise in equity markets is imminent, they would hike the allocation to equities. Meanwhile, the fund uses arbitrage opportunities in such a way that its overall equity exposure remains at least at 65 per cent of the fund’s corpus, thereby qualifying for equity taxation. Some BAFs went a step ahead and heavily sold their dividend plans to investors. The sales pitch: take home around one per cent dividend a month. See table. BAFs lost a bit of sheen in the beginning of 2018, because of two reasons. Budget 2018 brought back long-term capital gains tax (LTCG) in equity funds. Also, the market fall dented these schemes’ ability to pay dividends, as the rules clearly state that mutual funds can pay dividends only from realized profits. Budget 2020 was the last straw in the camel’s back. With dividends now to be taxed in the hands of investors, it makes dividend plans unattractive.

To be sure, not all BAFs and the erstwhile balanced funds were mis-sold, but there’s enough anecdotal evidence to suggest that the malice had spread. Renu Maheshwari, a registered investment advisor and co-founder of Finscholarz Wealth Managers LLP, says that balanced advantage funds were one of the most visible examples of mis-selling, under the garb of monthly dividends. “As such, there is nothing wrong with a BAF. It’s a good product under in volatile markets, as your entire portfolio is not exposed to the vagaries of the equity markets. Unfortunately, some sold it as an assured return product to retirees,” she adds.

As a category, arbitrage funds too would get affected by the new proposal. These funds use arbitrage opportunities between cash and derivative markets to earn their returns. Sold as an alternative to liquid schemes with the ability to earn about 6-7 percent returns, arbitrage funds come with the advantage of equity taxation. This is because arbitrage opportunities are managed in the equity market. Typically, institutions and the upper crust of high networth individuals use arbitrage funds to save on tax. “Up until now (and since Budget 2018 when former finance minister Arun Jaitley had also introduced a DDT of 11.648 per cent, including surcharge and cess), dividends from equity funds were taxed at a lower rate than the short-term capital gains tax rate of 15.60 per cent (including surcharge and cess). This made dividend plans attractive for many investors,” says Vinod Jain, Principal Adviser, Jain Investment Planner, a Mumbai-based distributor of financial products. Fund houses state that such investors would most likely take whatever dividends will be distributed before March 31. After that, such investors would switch to growth plans.

What works better: dividend or growth?

Thus far, debt funds charged a DDT of 29.12 per cent (including surcharge and cess) and equity funds charged 11.648 percent. Budget 2020 has abolished DDT and instead made it taxable in the hands of investors at their marginal rate of taxation. In other words, it will need to be added to an individual’s income and taxed as per her income-tax bracket.

Back of the envelope calculations show that as far debt funds are concerned, growth plans work out better than dividend plans. If you invest in debt funds for the long-term (more than three years), then the growth plan works out better for those in 20.8 percent tax brackets and above. For those in lower slabs, the dividends get taxed at lower tax rates than the LTCG tax of 20.8 percent.

For equity fund investors too, the growth plan works the best. See table. 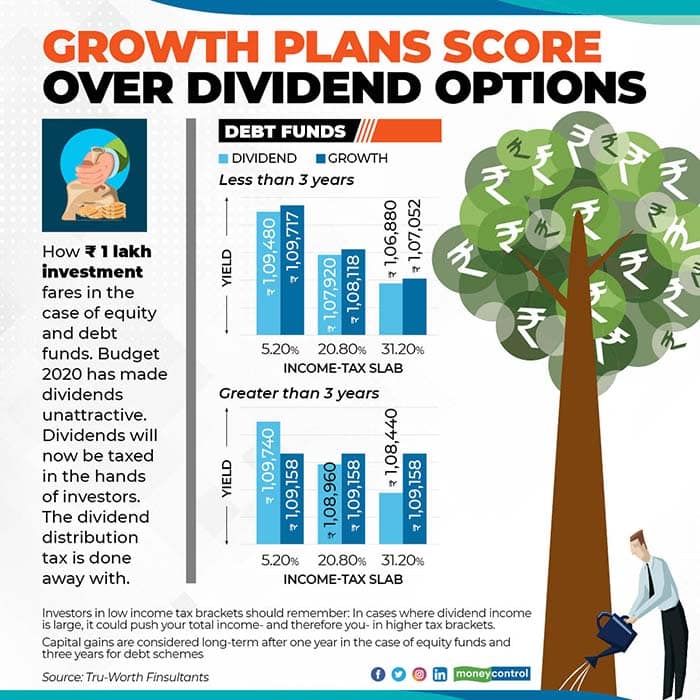 “Those in the highest tax brackets – 30 per cent and above – will be hit the most, because now dividends will be taxed at their marginal tax rate, instead of the earlier DDT, which was 11.648 percent,” says Ashish Chadha, a Gurugram-based registered investment advisor. Chadha points out that typically, investors in the higher tax brackets have large investments in equities as “with rising income levels, investors tend to diversify.”

That said, dividend plans do benefit certain type of investors. For instance, if you invest in a debt fund for more than three years, a dividend plan works out better for those in the lower tax brackets – 5.20 percent, 10.40 percent and 15.60 percent. But there is a caveat. If your dividend income is high in some years, you could get pushed to a higher tax slab. “What if you get a windfall income in a particular year? That could also push you up a tax bracket and you may end up paying higher tax,” says Saurabh Mittal, partner, Circle Wealth Advisors. Mittal says that it is cumbersome to keep track of your tax bracket every year. In his opinion, it’s better to stick to growth plans. 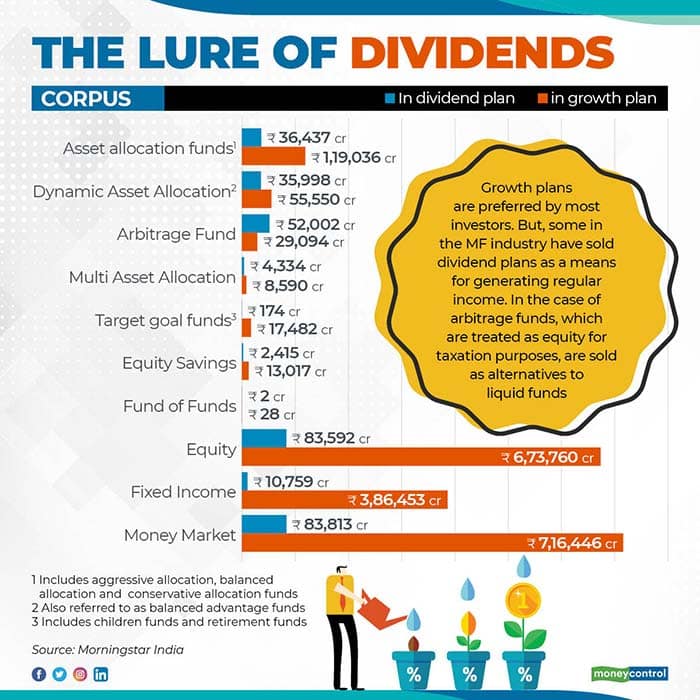 The abolition of DDT is a good move says Ashwin Patni, fund manager and head of products at Axis Asset Management. He believes that many investors used to choose between equity and debt funds based on how much tax they had to pay on capital gains as well as dividends. “But at least now, whatever dividends you get, be they from equity or debt funds, you will have to pay the same amount of tax,” he adds. Patni says that the best way to pick a product is to see how suitable it is to your financial goals. “Don’t go for an investment based on its taxation,” he adds.

Stick to growth plans. If you definitely need regular income, especially from your debt fund, invest in the growth option and opt for a systematic withdrawal plan.