It’s the last month of the financial year to make tax-saving investments for the year 2020-21. Investment decisions should be taken wisely, considering your financial goals. Avoid a last minute rush, plan for your tax-saving on priority.

The SENSEX is volatile at 50,000 and valuations seem stretched. So, lump-sum investments in equity linked savings scheme (ELSS) for tax-saving seem a tad risky.  An investment in five-year tax-saving fixed deposits (FDs) offers reasonable returns to investors in this scenario. Also, investors prefer FDs, as returns are certain. Those in the lower tax brackets find bank FDs more attractive. 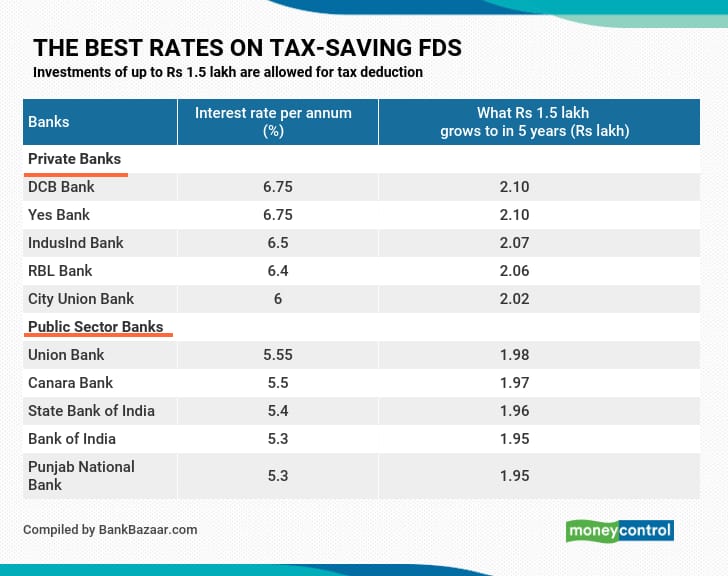 By investing in these FDs you can take the section 80C tax deduction benefit. Investments up to Rs 1.5 lakh can be claimed for tax deduction under section 80C of the income tax act. Tax-saving FDs have a lock-in period of five years and premature withdrawals are not allowed.

Private Banks such as Axis Bank, ICICI Bank and HDFC Bank offer 5.50 per cent, 5.35 per cent and 5.30 per cent interest respectively on tax-saving FDs.

Data compiled as on March 3, 2021 from respective banks' website. BankBazaar has accounted for FDs belonging to only those foreign, private, small and public sector banks that are listed on the stock exchanges. Banks, for which data is not available on their respective websites, were dropped. These rates are only of tax-saving five-year FDs for non-senior citizens.
Moneycontrol PF Team
TAGS: #banking #fixed deposit
first published: Mar 5, 2021 02:36 pm