Nifty likely to face stiff resistance at 10,490; top 5 stocks which can give up to 5% return in short term

"Till Nifty holds 10,350 levels decisively, bounce back from lower levels cannot be ruled out and on higher end stiff hurdle seen around 10,490 mark," says Rajesh Agarwal of AUM Capital.

Benchmark indices closed lower, dragged by banking and energy stocks whereas fertilizer stocks gained after the continuation of a government subsidy for urea.

The market breadth was in favour of advances with two stocks advancing against each declining one. 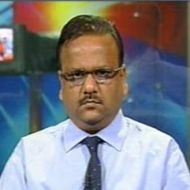 Nifty has formed a Spinning Top followed by two consecutive reversal candlestick pattern around its strong supply zone of 10,480 levels suggesting lack of momentum on upside. On hourly scale, it is trading around its rising trendline.

Till Nifty holds 10,350 levels decisively, bounce back from lower levels cannot be ruled out and on higher end stiff hurdle seen around 10,490 marks. Moreover, Oscillators like RSI & MACD are in sell mode.

Nifty Bank has formed 'Doji' candlestick pattern around its two major moving averages of 20 EMA & 200 SMA on daily scale indicating indecision around hurdle zone. On hourly scale, it is facing hurdle around 50 percent Retracement level (Drawn from high of 25,724 to low of 24,048) i.e. 24,900 mark.

Furthermore, Momentum indicators like RSI & MACD have given negative crossover on hourly time frame. We are expecting Nifty Bank to consolidate

Here are the top 5 stocks which can give up to 5% return in the near term: