172@29@17@144!~!172@29@0@53!~!|news|business|moneycontrol-research|goa-carbon-unfavourable-supply-demand-balance-weighs-on-q4-margin-remain-on-sidelines-3874941.html!~!news|moneycontrol|com!~!|controller|infinite_scroll_article.php!~!is_mobile=false
Watch experts decode 'The rise of ESG investing' on October 29 at 4pm. Register Now!
you are here: HomeNewsBusinessMoneycontrol Research 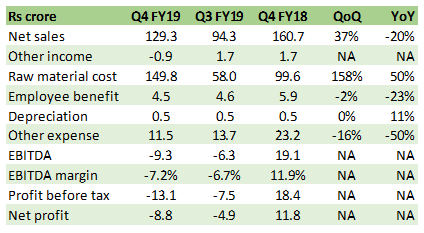 Close
Key negatives
Sales contracted by 20 percent year-on-year (YoY) due to lower offtake by the domestic aluminium smelters and planned shutdown at its Bilaspur plant, which constitutes about 15 percent of total capacity. It’s noteworthy that there has been a surge in inventories (36 percent of sales versus 16 percent in FY18) due to lower offtakes.

Sequentially, there was an improvement in sales due to higher production volumes. To provide perspective, higher production volume was possible as the Supreme Court had lifted ban on key raw material – green petcoke (GPC). It’s noteworthy that in the second and third quarter of FY19, the company was adversely impacted by the SC ban on petcoke.

The company’s operating profit was negative in Q4 on account of prevailing negative operating leverage and a sharp decline in gross margin. It continues to be impacted by adverse operating leverage as the utilisation rate is subpar due to lower offtake. Gross margin contracted to a mere 5.4 percent in Q4 FY19 as against 12.8 percent sequentially and 30 percent YoY due to lower CPC prices.

The company also had to bear an additional expense of about Rs 7.6 crore which was on account of write down of a by-product inventory and also due to non-fulfilment of export orders, which impacted the bottomline.

Key positives
The key takeaway from the management commentary is that import quota of GPC allowed for Goa Carbon seems to be sufficient to operate its plants at optimum capacity. As per EPCA’s (Environment Pollution Control Authority) data for FY18, GPC requirement for producing one tonne to CPC is about 1.35 tonne. Taking that into consideration, since the GPC import allowed for the company in FY20 is 3,30,000 tonne, it roughly covers its requirement to operate the plant around 90 percent utilisation.

Key observation
In recent times, there has been commissioning of new CPC plants in China leading to adverse demand-supply situation. On account of this, CPC prices have declined about 15 percent and likely to remain at current levels in the near term. Domestic smelters have been procuring CPC from China due to discounted prices, which has led to lower offtake from Goa Carbon in the quarter gone by.OutlookThe key challenge for the company in terms of availability of imported GPC is taken care of post-implementation of import quota. We expect a gradual recovery in domestic market as the smelters exhaust their import quota restriction of CPC, which is 500,000 tonne. CPC import quota allowed for smelters cover only 30 percent of their annual requirement and hence they are expected to return later to domestic players such as Rain Industries and Goa Carbon.

On account of weak trends for CPC prices and lower spread between GPC and CPC prices, we expect EBITDA margin to stabilise at low teens in the medium term. The stock has corrected by more than 50 percent from its 52-week high and currently trades at 9.4 times FY20 estimated earnings. While a large part of the headwinds is already in the price, concerns on the profitability are visible and hence we remain on the sidelines.