MC Explains | What is the RBI pilot programme for a retail digital rupee?

The RBI and commercial banks will form a closed user group comprising participating customers and merchants. The banks will distribute the digital rupee to the user group in the form of tokens in the same denominations that paper currency and coins are currently issued

Customers selected by banks for the pilot can ask banks to debit their bank account and transfer certain denominations of currency to their CBDC wallet.

What do we mean by retail CBDC?

The graph below explains these ideas in a better way. We see money having three attributes: central bank-issued money, universally accessible money and electronic money. There are reserves issued by central banks and are already electronically available. Thus, the transition of reserves to wholesale CBDC is much easier. The RBI had announced a pilot for wholesale CBDC last month for settlement of secondary market transactions in government securities. 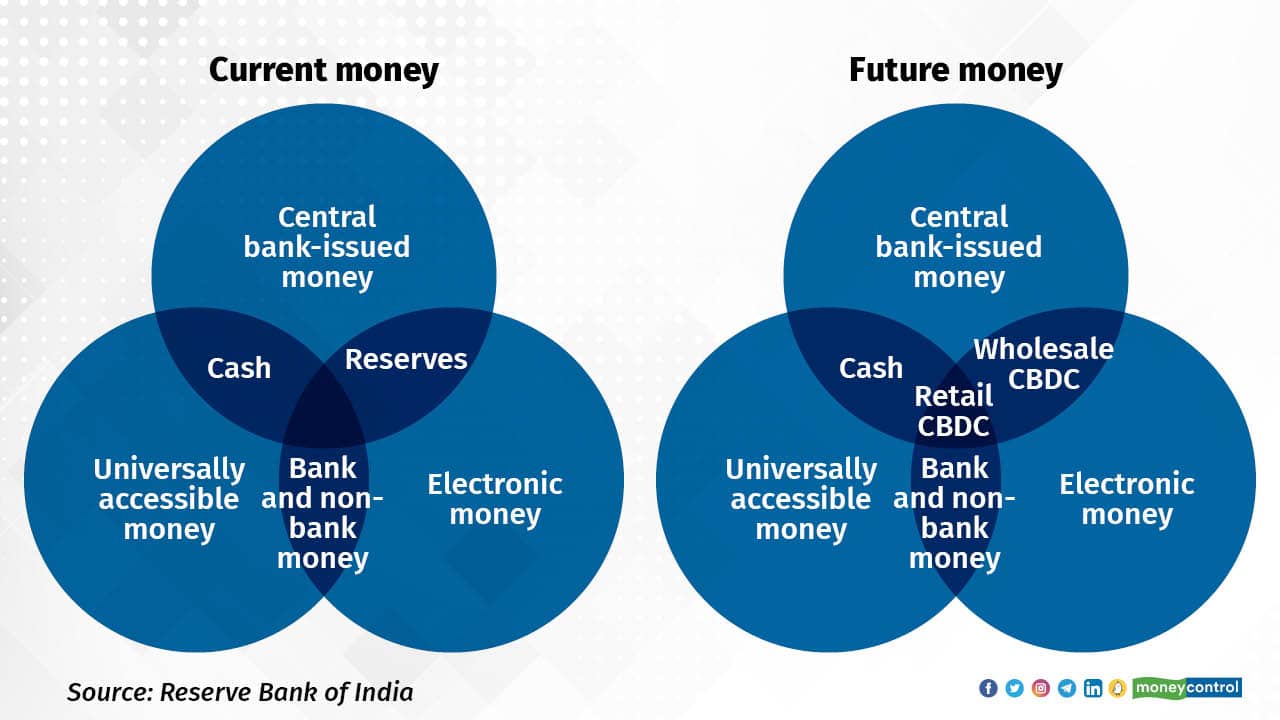 Central banks aim to fill this gap and by issuing a retail CBDC, they want to provide a kind of money that has all the three attributes: issued by central bank, universally accessible and electronic.

What is the RBI’s pilot project on retail CBDC?

The RBI has decided to first conduct a pilot rollout of the retail digital rupee. The central bank has identified eight banks for the project that will happen in two phases. The first will begin with four banks, State Bank of India, ICICI Bank, Yes Bank and IDFC First Bank. They will offer the retail digital rupee in four cities: Mumbai, New Delhi, Bengaluru and Bhubaneswar. The second phase will see four more banks joining the project—Bank of Baroda, Union Bank of India, HDFC Bank and Kotak Mahindra Bank. Together, they will extend the pilot to nine more cities: Ahmedabad, Gangtok, Guwahati, Hyderabad, Indore, Kochi, Lucknow, Patna and Shimla.

The central bank and banks partnering it will form a closed user group comprising participating customers and merchants. The banks will distribute the digital rupee to the user group in the form of tokens in the same denominations that paper currency and coins are currently issued. The central bank has also added that the retail digital rupee offer will have similar features of physical cash like “trust, safety and settlement finality”. The digital rupee will also not earn any interest and can be converted to other forms of money like deposits with banks.

Users will transact the digital rupee tokens through a digital wallet offered by the participating banks and stored on mobile phones or other devices. So, it will be similar to the other wallets held on the phones but the liability of the digital rupee will show on the balance sheet of the central bank.

What is the purpose of a retail digital rupee?

In the budget speech for FY23, Finance Minister Nirmala Sitharaman had proposed the introduction of a CBDC. She said that a CBDC “will give a big boost to the digital economy” and “also lead to a more efficient and cheaper currency management system”. Hence, the RBI will issue a CBDC in 2022-23 “using blockchain and other technologies”.

Sitharaman made this proposal looking at the global environment where multiple central banks are working towards issuing CBDCs. The central banks of Bahamas and Nigeria have already introduced a CBDC. The Chinese central bank is in advanced stages of issuing a retail CBDC and has conducted pilot experiments similar to what the RBI is doing now.

RBI deputy governor T Rabi Shankar in a 2021 speech pointed to three reasons for the high interest in CBDC.

- Jurisdictions with significant physical cash usage seeking to make issuance more efficient (like Denmark, Germany, or Japan or even the US)

- Central banks seek to meet the public’s need for digital currencies, manifested in the increasing use of private virtual currencies, thereby avoid the more damaging consequences of such private currencies.

The Indian case fits with the second and third reasons. We have to now wait for the results of the pilot project. There is another thing that the RBI needs to perhaps reconsider, which is the abbreviations it has chosen for wholesale and retail digital currencies. The wholesale currency is currently called e₹-W and the retail as e₹-R. Needless to say, both are highly confusing and need to be changed to something simpler.