Trade Spotlight: What should you do with Polyplex Corporation, RITES, APL Apollo Tubes on Thursday?

On the broader markets front, the Nifty Midcap 100 index gained half a percent and Smallcap 100 index was flat with a positive bias.

Stocks that were in action included Polyplex Corporation which was the biggest gainer in the Nifty500 index, climbing 12 percent to Rs 1,675 - its highest closing level since December 14, 2022. The stock has formed robust bullish candle on the daily charts with strong volumes, closing above 50 DEMA as well as 9 DEMA and 21 DEMA. It has seen a breakout of downward sloping resistance trend line adjoining multiple touchpoints - November 21, November 23, and December 5, 2022.

APL Apollo Tubes advanced 4 percent to end at record closing high of Rs 1,189 apiece and formed long bullish candle on the daily charts with above average volumes, making higher high higher low for second straight session with momentum oscillator RSI trading above 60 level. The stock has been trading well above short term as well as long term moving averages like 9 DEMA, 21 DEMA, 50 DEMA, 100 DEMA and 200 DEMA, which is also a positive sign. It has seen a breakout of downward sloping resistance trend line adjoining December 5, 2022 (record high) and January 17, 2023.

The rally which was started in May 2022 till date resulted in 47 percent appreciation. Currently, it is trading above the 12-21-50 daily exponential moving averages, which is a sign of strength in the counter.

The previous trading session gave a clean breakout from the triangle pattern. On indicator front, daily 14 period RSI has taken support and then it has rebounded thus indicating further up move in APL Apollo Tubes. 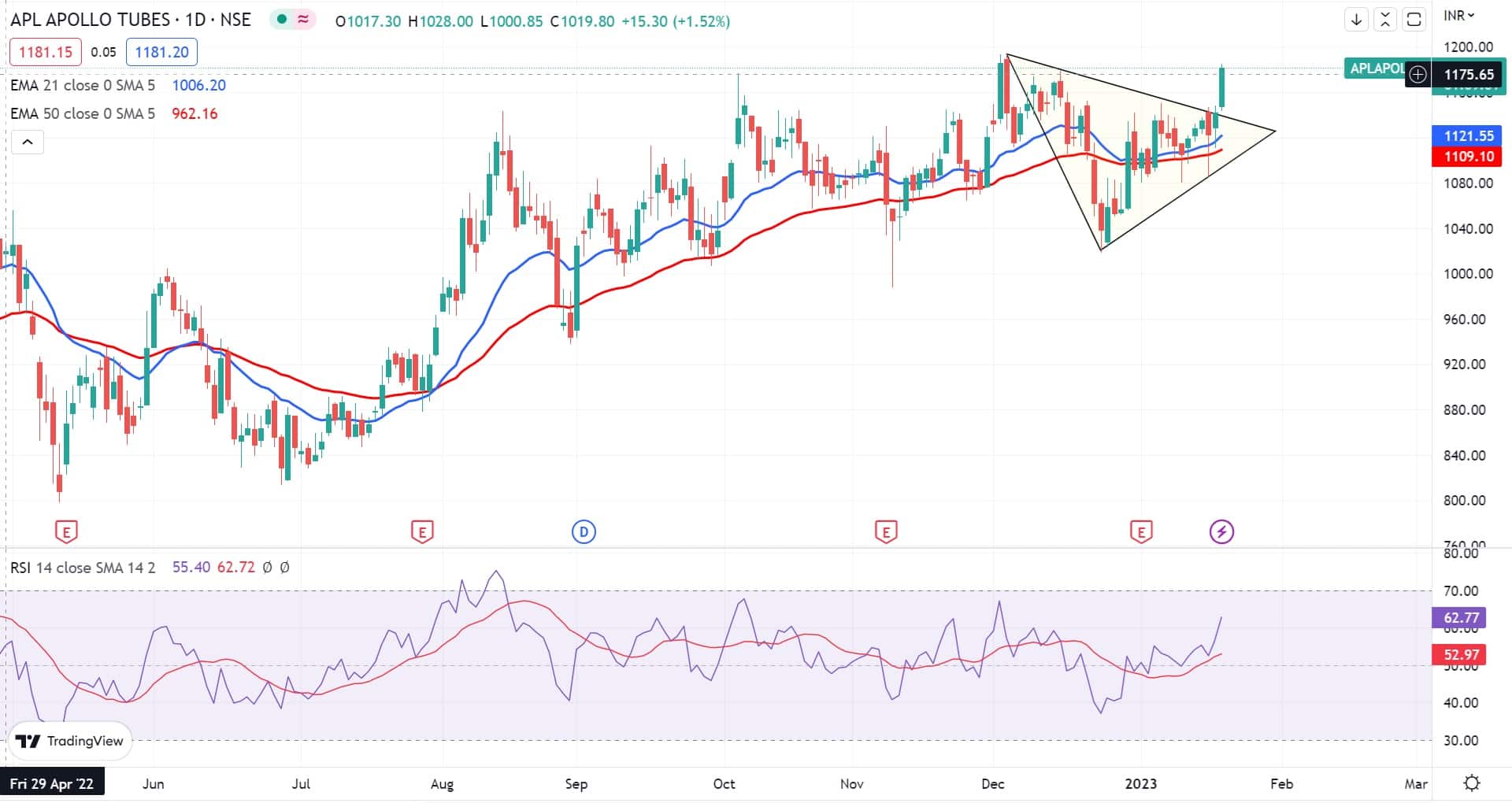 After the free fall started from August 1, 2022 till December 23, 2022 which resulted in 39 percent. In the previous trading session, Polyplex had seen excellent buying interest. What is more interesting is that in the last month, any sort of buying interest is followed by massive volume (refer to the chart). After registering a life-time high of Rs 428 during October 2022, the said counter has tanked almost 29 percent. In the current scenario, RITES has formed a piercing candlesticks pattern on a weekly scale which signals a possible reversal in the coming weeks.

At present, the said counter has taken support above 200 DEMA and has formed a classic base near the 5-day exponential moving average.

In addition, the daily 14-period RSI has taken out its 4-month-old trendline which hints towards up moves in coming sessions. One can buy around Rs 337-341 with a target price of Rs 384 and the stop-loss would be Rs 316 on a daily close basis.