Trade Spotlight | What should you do with Coromandel International, Ashok Leyland, Tanla Platforms, Shilpa Medicare on Wednesday?

Traders should continue to ride the trend with a trailing stop-loss method and also look to add positions on any corrective declines in Coromandel International.

The market was highly volatile throughout session and closed with moderate losses due to global correction amid fears of recession, on May 24. FMCG, IT, Metal and Pharma stocks were under pressure.

The broader space, too, caught in bear trap as the Nifty Midcap 100 and Smallcap 100 indices have fallen 0.65 percent and 1.26 percent respectively. The market breadth was also in favour of bears as about three shares declined for every share rising on the NSE.

The volatility increased sharply on Tuesday, indicating the trend is in favour of bears which is discomforting bulls. India VIX, which measures the expected volatility in the market, jumped 9.56 percent to 25.64 levels.

Stocks that were in action included Coromandel International and Ashok Leyland which were top gainers in the futures and options segment, while Tanla Platforms and Shilpa Medicare showed strong buying interest after a long time.

Post some consolidation, the prices had given a breakout from a falling trendline resistance during last week. The breakout was supported by good volumes and we have also seen a good follow up move in last couple of sessions. Thus, the trend for the stock remains positive as the ‘Higher Top Higher Bottom’ structure remains intact and the ‘RSI’ (relative strength index) oscillator is also indicating a positive momentum.

Traders with existing positions should hold and continue to ride the trend while and intermediate dips should be used as buying opportunities.

The immediate supports for the stock are placed around Rs 132 and Rs 127 while the stock has potential to rally towards Rs 152-153 in short to medium term. The stock witnessed a gap up opening which was followed by huge volumes in Tuesday's session. However, if we look at the recent chart structure, the '200 EMA' (exponential moving average) was acting as a support when the stock was in an uptrend and now when that support has been breached, the same average is acting as a resistance.

Hence, for any sustained rally, prices need to cross the resistance zone of Rs 485-500. Fresh buying should be done only on a breakout above the mentioned resistance above which, the stock could then see momentum towards Rs 540.

On the flipside, the immediate support for the stock is placed around Rs 420 which could be used as a reference for stop-loss on existing positions. 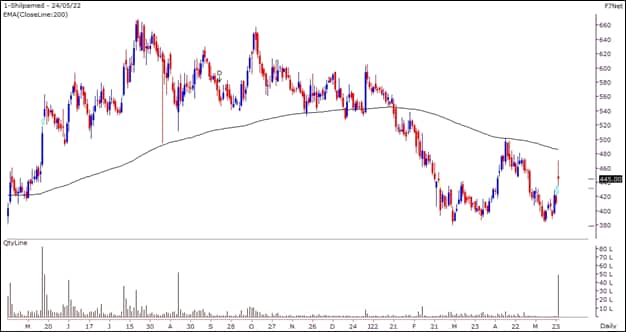 Along with the broader markets, this stock has corrected from its swing highs of Rs 2,096 seen at the start of this calendar year. The prices are trading in a falling channel and from the support end of the channel, we are witnessing some pullback move. The ‘RSI Smoothened’ oscillator is in oversold zone and hence we could see some more pullback in the near term.

However, prices need to give a breakout above the resistance end for any sustained momentum. The immediate support for the stock is placed around Rs 1,140 which could be seen as a stop-loss level for existing long positions. The resistances in the stock are seen around Rs 1,400 followed by Rs 1,520. The stock has been forming a ‘Higher Top Higher Bottom’ structure and is thus in an uptrend. The recent upmove has also been backed by rising volumes and the ‘RSI’ oscillator is also indicating a positive momentum.

Hence, traders should continue to ride the trend with a trailing stop-loss method and also look to add positions on any corrective declines.

The immediate supports for the stock are placed around Rs 930 and Rs 890 whereas the stock could continue its upmove towards Rs 1,027 in the near term.