The stock market snapped a seven-day losing streak on February 25, the first day of the March series, with a 2.5 percent gain. The benchmark indices as well as the broader market weakened after Russian forces invaded Ukraine, which lifted oil prices to over $100 a barrel and took other commodity prices to either record high levels or multi-month highs. Net sales by foreign institutional investors were Rs 19,843 crore during the week.

“We can clearly see Nifty breaking below the sacrosanct moving average of 200-SMA placed around 16,900. Since this has happened with a ‘breakaway gap,’ traders would continue to have challenging times till we reclaim 16,800-17,000 with some authority,” said Sameet Chavan, chief analyst-technical and derivatives, at Angel One.

He said reaching 16,800-17,000 levels is possible in the near term only if tensions ease with respect to Russia and Ukraine and until that happens, “we are not completely out of the woods.”

On the flip side, 16,400 followed by 16,200 are seen as immediate support levels but if things worsen from here, it won’t be surprising to see the Nifty sliding below 16,000 as well, according to Chavan.

Since volatility is likely to remain on the higher side, traders are advised not to get carried away by one-day bounce. It’s advisable to keep regular tabs on all developments and better to stay light on positions, Chavan said.

Here are the top 10 trading ideas by experts for the next 3-4 weeks. Returns are based on February 25 closing prices.

The stock was at Rs 1,838 in December and from it fell to Rs 1,330 in February, without any meaningful bounce. However, it has spent a considerable amount of time between Rs 1,480 and Rs 1,390, which has generated a positive divergence on the daily chart. 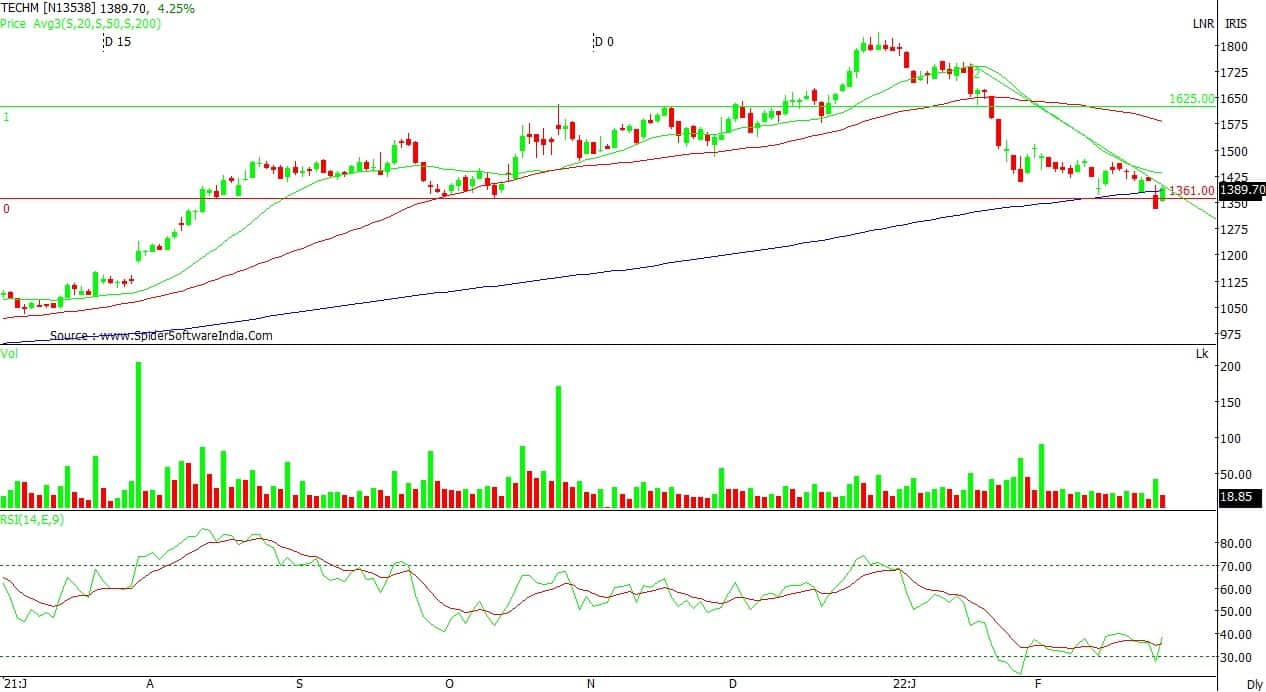 The stock has been consolidating within the range of Rs 975 and Rs 1,200 since September. Even when there was a huge drop in the market, the stock stayed at Rs 975, which suggests it is a real support level.

Since it settled at Rs 1,070/1,080, our strategy should be to buy the stock in two tranches – 50 percent at current levels and the remaining 50 percent at Rs 1,025. At higher levels, the stock may again move towards the Rs 1,200. Protect the long position with a final stop-loss at Rs 950 on a closing basis. 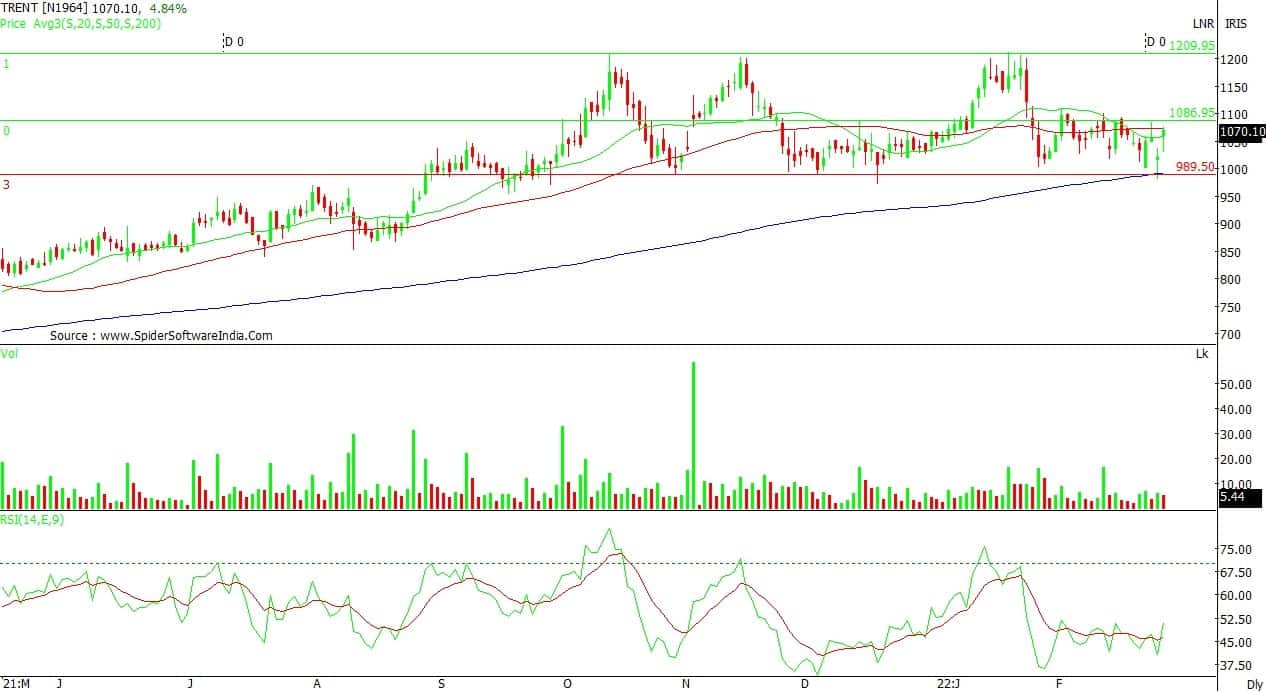 The stock has declined gradually from a high of Rs 272.80 to Rs 206. The primary trend of the stock is positive. It is in recovery from the oversold zone in the short term and on an intermediate basis, it has corrected to decent levels.

We prefer to buy and hold such shares from a positional point of view as the risk-reward ratio is quite comfortable for buying the stock. Buy at current levels and more on the downside near Rs 208. Place final stop-loss at Rs 195 for targets of Rs 260 and Rs 270. 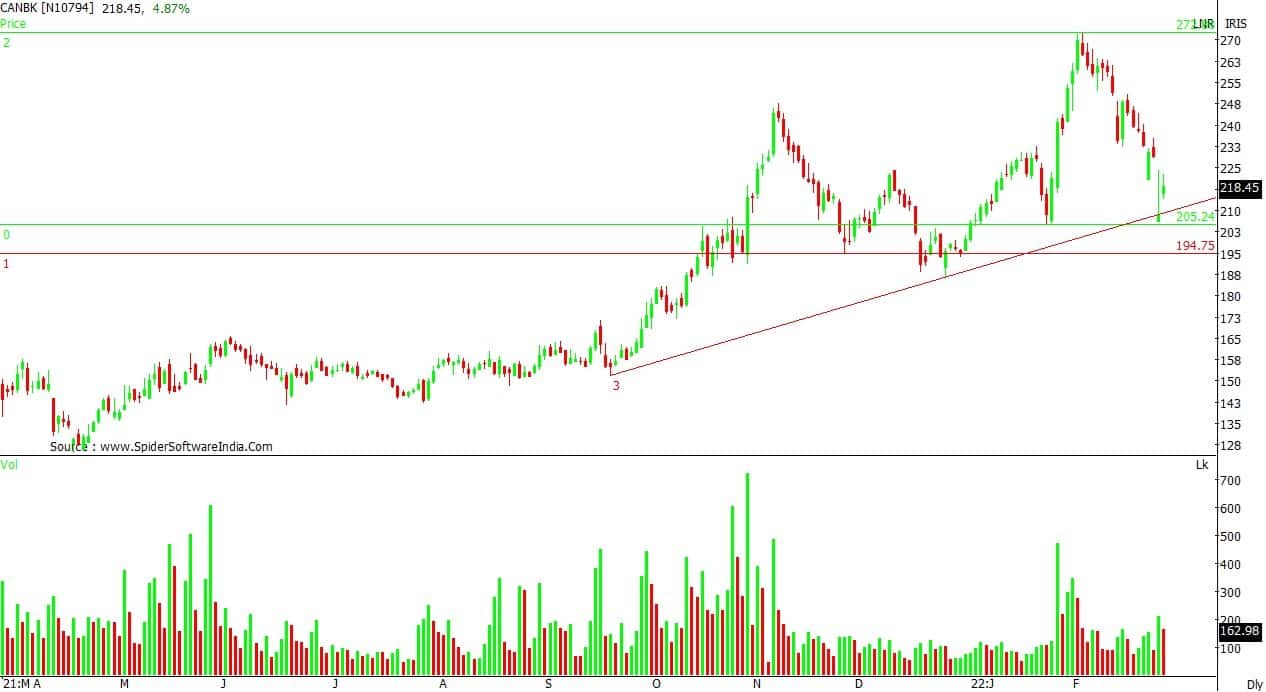 The Timken stock price has broken out from a symmetric triangle on the daily chart. The primary trend is positive as the stock is trading above all important moving averages. The stock is forming a bullish, higher-top, higher-bottom formation on the weekly chart.

The relative strength index (RSI) and money flow index (MFI) oscillators are placed above 60 levels and in rising upwards, indicating strength in the current uptrend. Also, the directional indicator (DI) is trading above -DI while the average directional index (ADX) line has started sloping upwards, indicating that the stock price is likely to gather momentum in the coming days.

The stock is taking support at the upward sloping trendline. It is expected to outperform during the days to come.

Accumulation was seen during the current month, when volumes were significantly higher than the average of the past few months. The primary trend is positive, with the stock trading above its important moving averages.

The stock has broken out on the weekly and monthly charts. After touching an all-time high in mid-February, the stock has corrected 5 percent, which we believe is a running correction in an overall uptrend.

After a sharp correction in January, the price has consolidated within a range in the past few weeks. This correction and then consolidation have led to the formation of a ‘bearish pennant’ pattern on the daily chart.

Also, the entire recent consolidation has been below its short-term moving averages, while the 20-day exponential moving average (EMA) on the daily chart has acted as a resistance.

The relative underperformance of the stock recently is not a good sign and if the prices break below the support of Rs 1,140, then it could result in a further correction in prices. Volumes in the recent correction were high and there’s no buying interest seen in the pullback.

Hence, short-term traders can look for shorting opportunities if the stock breaks the support of Rs 1,140 with a stop-loss placed above Rs 1,180 for potential targets of Rs 1,100 and Rs 1,070. (The given levels are of the cash segment, which can be used as a reference to trade in the futures segment.) After the company’s recent quarterly results, the stock had seen buying interest and had broken out from its resistance with a gap up. The stock rallied higher on good volumes and has now pulled back as the broader markets corrected.

However, volumes on the pullback are low and the previous breakout level has now become a support. The stock has been forming a higher top higher bottom structure and as long as this is intact, we expect buying interest on declines. The stock has formed a bullish Harami candlestick pattern on the daily chart after a prolonged correction, which suggests exhaustion of selling pressure and the stock seems to be ready for a significant recovery.

Also, the stock price fell below the lower band of the falling wedge on the daily chart only to come back into the wedge immediately, which indicates a failed breakdown. Momentum indicator RSI has shown an early sign of reversal from the oversold zone.

Over the short term, the stock is likely to recover towards Rs 600 and Rs 620. On the lower end, Rs 534 is likely to act as a support, below which the stock may become weak again.

The stock has given a cup-and-handle pattern breakout on the daily chart. Also, the price has retested the breakout line before moving up again.

The price has moved higher after a few days of downward consolidation, which suggests the resumption of the uptrend after a pause. Besides, the stock is trading comfortably above the 50-day exponential moving average and 200-day simple moving average.