58 stocks in the S&P BSE Small-cap index rose 10-40% in the week gone by which include names like Welspun Enterprises, Dhampur Sugar, Dish TV, and BEML.

Bulls managed to keep an upper hand in a week which witnessed wild swings on either side. The S&P BSE Sensex rallied 0.8 percent while the Nifty50 witnessed a rise of 1.05 percent for the week ended December 14.

However, what really stood out was the broader market which outperformed benchmark indices. The BSE Midcap index rose 3.2 percent while the S&P BSE Small-cap index ended 2.8 percent higher on weekly basis.

As many as 58 stocks in the S&P BSE Small-cap index rose 10-40 percent in the week gone by which include names like Welspun Enterprises, Dhampur Sugar, United Bank of India, Dish TV, BEML, Timken India, Can Fin Homes, Nitco, PC Jeweller, Reliance Naval, and Tata Steel etc. among others.

The outperformance could be because of low participation is seen in the broader market throughout the year. But, can we say that they are out of woods? Maybe not, suggest experts.

In the S&P BSE Midcap index, as many as five stocks rose 10-20 percent which include names like Indian Bank, Supreme Industries, GE T&D, Larsen & Toubro Infotech, and Bank of India. 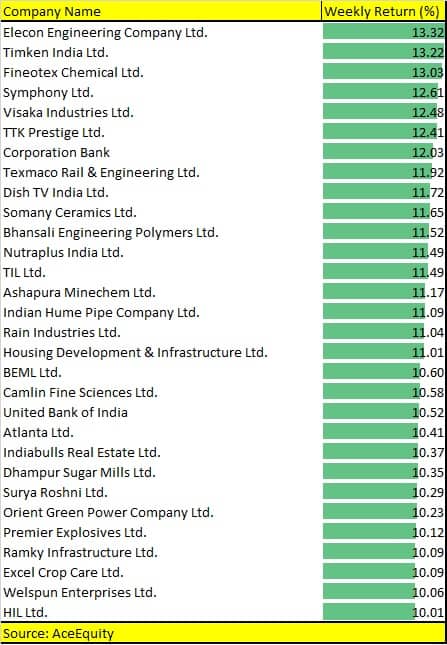 “The Mid and small-cap indices have barely moved with Nifty and Sensex. Seems like a repeat of a shallow rally in mid of 2018,” Sahil Kapoor, Chief Market Strategist, Edelweiss Investment Research told Moneycontrol.

“Mid and small-cap stocks are undergoing a realignment of valuations. At this juncture, they would continue to face earnings multiple de-rating. Improvement in earnings may lead to a new equilibrium for mid and small cap space,” he said.

The week started off on a slightly volatile note amid unfavourable exit poll results for the ruling party, but the emergence of a single party in all the key states of Madhya Pradesh, Chhattisgarh, and Rajasthan helped calm investor nerves.

The appointment of new RBI governor, Shaktikanta Das also aided positive sentiment on D-Street which led to some bit of short coverings in the market. The S&P BSE Sensex closed a shade below 36,000 while Nifty managed to reclaim 10800 levels on weekly basis.

“Though the resignation of RBI Governor surprised the market, and the election verdict was a setback to the government, it hasn’t had a lasting effect in the market as it may have considered this as an isolated effect like local or anti-incumbency issues than a national election,” Vinod Nair, Head of Research at Geojit Financial Services told Moneycontrol.

“The market quickly picked up from a low of 10,334, rallied and reclaimed 10,800 marks as a swift reaction from the government with the appointment of new RBI governor supported the sentiment. Bank Nifty outperformed with an expectation of ease in liquidity and relaxation in the PCA framework,” he said.