In the current market scenario one should avoid leveraged positions and investors should diversify their portfolios, said Ajay Jaiswal of Stewart & Mackertich Wealth Management

We continue to hold our target for Nifty around 11,600 towards the end of this financial year as we do not see many triggers that can take the market beyond that, Ajay Jaiswal, President – Strategies & Head of Research, Stewart & Mackertich Wealth Management said in an interview to Moneycontrol's Sunil Shankar Matkar.

They expect consumer and IT segments to consolidate for 3-6 months before taking off again since both the sectors have already seen enough buying. Edited excerpt:

In our previous interview in April 2018, we had set a target for Nifty around 11,600 levels till FY19-end. However, we briefly breached that level and now trading 700-odd points from the recent peak.

We continue to hold our target for Nifty around 11,600 towards the end of this financial year as we do not see many triggers that can take the market beyond that. The 1,000+ point rally that we had witnessed was primarily driven by RIL, TCS, HUL and some other consumer-specific, NBFC and IT names. 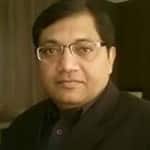 Both the consumer and IT stocks have seen enough of buying based on the structural change in fundamentals due to depreciation of the INR/USD, pick-up in volume growth in FMCG.

We expect both the sectors will consolidate for 3-6 months before taking off again. We may see select consumer, metal and mining, pharma and IT companies to outperform during the rest of the FY19.

Over the past few weeks the private banking and NBFC space has seen selling due to rise in interest rates, news driven events in private banks and stretched valuations. We expect Nifty to trade 10,500-11,600 for the rest of the year.

After the Friday’s big sell-off, what strategy should one have right now? Is this time to indulge into value-picking right now?

Friday’s selling was perpetuated due to unwinding of leveraged trades on fear of capitulation due to fall in a particular NBFC which dragged other NBFC stocks as well. Rumours and fears in the market is likely to rule the roost till the General elections of 2019 and investors must brace for such events, albeit each such event gives long-term investors to accumulate their choicest stocks.

In the current market scenario, one should avoid leveraged positions and investors should diversify their portfolios and keep at least 15-20 percent in liquid funds or cash. Value-picking can be seen in a host of stocks where valuations have hit nadir compared to some of the flavour of the season stocks or sectors.

For instance, most blue chip PSU stocks have fallen 40-60 percent primarily due to falling fiscal health of the country and uncertainties surrounding general elections 2019. The outcome of the General Elections is just 8 months from now hence value investors with 12-18 months perspective can buy host of PSU and capital goods stocks.

Will NBFCs and housing finance companies in particular continue to remain under pressure?

We have seen brilliant run in the NBFCs and Housing Finance companies over the past 3 years and particularly in the non-HFC NBFC space in the past 1 year. This has led to several speculative built in most NBFCs.

We believe select NBFCs will continue to outperform the market. In the housing finance space, we remain neutral as a research house due to lot of noise in the sector over the past many months. The sector has generated very good returns over the past 6-7 years and valuations are stretched.

Hence, select HFCs may consolidate for 1-2 years before some of them start performing again. Till then we advise to stay away from HFCs.

After two rate hikes, do you expect the RBI to go for another hike or more than one hike by FY19?

Despite the sharp depreciation of the INR/USD and increase in oil prices we have seen inflation under control and below the RBI’s guided levels. Hence, we do not expect the RBI to raise rates in CY2018.

Also, we believe the INR and the crude oil prices are both at the tipping points and may trade rangebound. The CPI for August was 3.69 percent and has remain below 5 percent for the past 7 months.

What are your top five picks for next one year?

The stock has corrected around 20 percent from peak and is trading at 38xFY2020E EPS based on consensus earnings. We believe the company’s foray into new areas is likely add value besides its traditional jewellery business which is also likely to see market share gains.

Also in a rising rate scenario we believe the company is better placed compared to some of its peers. We expect a 25 percent upside in the stock from the current level in a years’ time.

We believe this company has all the where-with-all to ride the engineering-infra-power-automation growth across sectors in India. ABB and NITI Aayog will make key sectors of Indian economy ready for a digitalised future and realise the potential of AI, big data and connectivity. We expect 30 percent upside in the stock in a years’ time.

L&T- L&T’s buyback at maximum INR1500 is one of the reasons to buy the stock. Never the less, this conglomerate has potential to ride the India Infra-engineering-defense capex growth. The stock in trading FY20E EPS around 18.50 times which is under-priced. We expect a 25 percent return from the stock in a years’ time.

The company has taken several steps to bring down debt, sell off bad investments, focus on asset light model and bring back its mojo in the past 3-4 quarters. The same is visible in its recent earnings reports. Increase in ARR and occupancy is another feather in the cap for the company and more so for the sector.

The recent INR depreciation makes India a favourable destination to US travellers that may further increase occupancy for its hotels. We have a price target of Rs 169 on the stock.

The company’s renewed strategy with Red Label Collection for women to target the young and the aspiring is clearly visible on the ground at several of its stores. Bata with its complete range of products targeting all segments is likely a major beneficiary.

We expect a positive surprise to its consensus earnings estimates for the next 2-3 years and expect share price gains of around 25 percent in 1 years’ time.

This blue chip mini-ratna in the PSU stable gives an excellent opportunity for value investors. A time tested company available at 16xFY20E EPS with around 20 percent ROE in FY20(E) has robust growth visibility considering mega expansion plans by refineries and oil and gas companies.

The current valuation is also trading around 18 percent discount to 5-years average. Traditionally its consultancy business has remained a stable business and its LSTK business looks to grow significantly. A rising oil price and rising interest rates are both positive for the company.

Disclaimer: The views and investment tips expressed by investment expert on moneycontrol.com are his own and not that of the website or its management. Moneycontrol.com advises users to check with certified experts before taking any investment decisions.
Sunil Shankar Matkar
Tags: #Hindustan Unilever (HUL) #MARKET OUTLOOK #Nifty #RIL #Sensex #Stocks Views #Tata Consultancy Services (TCS)
first published: Sep 25, 2018 08:59 am